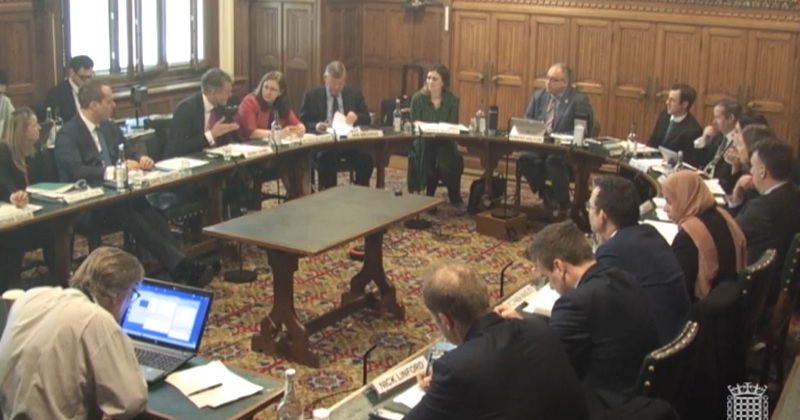 The education select committee held their first session yesterday with what it called a “discussion around the complexity of the levy, its impact on smaller businesses (non-levy payers) and the use of the levy to fund higher level apprenticeships”.

You can watch the session here.

As one of the witnesses, I prepared some analysis and notes ahead of the session. In the spirit of sharing is caring, I’m publishing them here in the hope they may be useful.

Q1. How did the introduction of the apprenticeship levy in 2017 affect employers in different industries?

An excellent question that is very difficult to answer (anecdotal evidence is of little to no value) in the absence of data on apprentice industry characteristics since May 2017. The DfE did publish “experimental” data on “apprenticeships in England by industry sector” (click here) in October 2018, but this only goes up to 2016/17, before the levy was introduced. The DfE said they planned to publish more up-to-date data in October 2019, but delayed this “to enable analysis looking at the impact of the introduction of the apprenticeship levy on employers engaging with apprenticeships, as well as including data from the 2018 to 2019 academic year”. The DfE will now publish this data at 09:30 tomorrow (12 March 2019).

Here’s the data from 2016/17, and with the 2.3 per cent public sector starts target, I would expect to see significant growth in that sector. 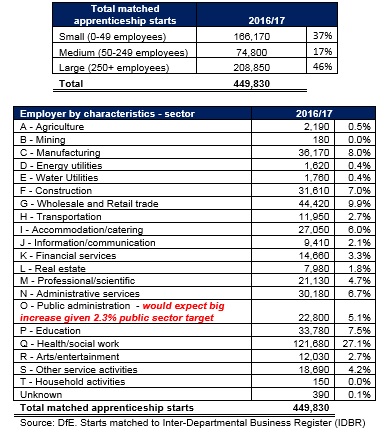 More generally, I can say as an analyst of apprenticeships data for more than a decade, the level of transparency since the introduction of the levy has significantly fallen. Beyond starts and achievements, there is now very little financial data published at all in terms of provider or employer funding. This is something the committee may wish to challenge both the Treasury and DfE on – as it makes impact and policy assessments very difficult.

Q2. Why was there a large fall in apprenticeship starts after the introduction of the levy?

It is important to understand that the £2 billion+ levy tax income was just replacing £1.5 billion the Treasury was putting in – so it was not the introduction of the levy that caused a fall in starts.

The very predictable fall is starts was actually caused (mainly) by six changes the Education and Skills Funding Agency made relating to funding rates, rules and provider registers that came in at same time as levy in May 2017.

The six changes that meant a drop in starts was very predictable:

Since then, starts have not fully recovered (23 per cent down), particularly at level 2 (for all age groups) which is 51 per cent down on the year before the levy was introduced. In terms of a priority area, the number of 16-18 starts remains 26 per cent down. The growth at level 4 and above has been driven by… a) the introduction of standards at that level and… b) a new and very significant rule from May 2017 that people with degrees (no limit on level of prior attainment) can be funded for apprenticeships. 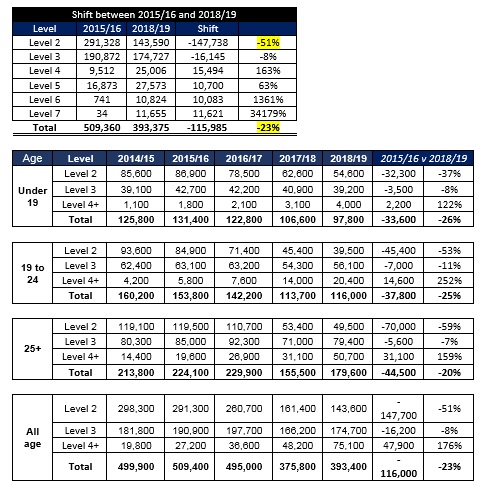 Q3. How have the government’s recent reforms, such as the increased flexibility for levy-payers to be able to transfer up to 25 per cent of their funds, affected employers?

The policy to allow levy-paying employers to transfer up to 10 per cent per year was introduced a year into the levy to help large employers spend their funds and support smaller employers. With less than 0.5 per cent used this way, Anne Milton questioned at the Conservative Party conference in October 2018 if it was “too small to make it worthwhile”.

Take-up remains slow despite increasing the transfer maximum to 25 per cent in April 2019. DfE figures from February 2020 show that just 870 (0.5 per cent ) starts were funded via levy transfer out of 162,000 levy-supported standards for 2018/19. However, the DfE also report uptake has increased to 1,500 starts funded via a transfer in recent months.

The challenge is that it is a high administrative burden for the levy-paying employer because funds can only be transferred once an apprentice has been enrolled and the risk remains with the levy-paying employer. The ESFA is, however, aware of the risk to public funds (fraud) with this type of transfer ‘market’. Anne Milton said at a fringe event in October 2018: “We have to have rules, and they’re irritating and bureaucratic, but fraud has been an issue.”

The West Midlands Combined Authority has big businesses investing in an “apprenticeship levy transfer fund”, which they hope will collect up to £40 million. This was part of a “£69 million skills deal agreed with the government in summer 2018 – the first of its kind in the country”. It “means the large employers donate a portion of their unspent apprenticeship levy funds to the smaller companies, covering 100 per cent of their apprenticeship training and assessment costs”.

Q4. What changes could be made to the levy to ensure it is easier for businesses to upskill their workforce?

Some thoughts, on basis the Treasury (despite making a £1.5 billion saving per year by replacing apprenticeship spending by the levy) won’t pump extra money in nor see it as politically possible to lower the £3 million threshold, nor increase the 0.5 per cent levy rate:

Some other issues and analysis that may be of interest: 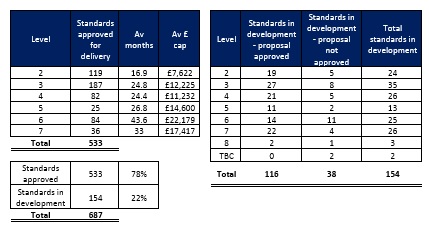 2. FE colleges look particularly vulnerable as they have delivered just 30 per cent of starts from August to October 2019, of which 40 per cent are still on the old frameworks and 58 per cent are with non-levy employers (SMEs).

3. Unspent funds shows policy is working (government planned for around 50 per cent), because if levy employers used it all there would be £0 for small employers, English and math, incentive payments etc. 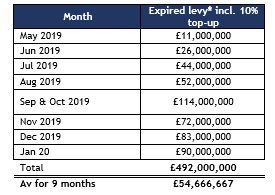 4. The DfE do not like talking about it, but it is clear funding is now running out as cheap frameworks are being replaced by the expensive standards

ESFA annual report, July 2019 : “Increased demand for apprenticeship funding in future years has the potential to place pressures on funding provided by the apprenticeship levy. Budget pressures will be explored through the Spending Review process.”

6. A third of apprentices fail to finish their course, and this is set to get even worse with frameworks moving to standards

Look out for the 2018/19 national achievement rate tables (NARTs), due for publication on 26 March. We’re expecting to see a massive 10 percentage point drop in achievement rates, which the DfE is very concerned about.

6. The controversial MBA apprenticeship is being reviewed after Gavin Williamson wrote to the IfATE to say: “I am committed to maintaining an employer-led system, but I’m not convinced the levy should be used to pay for staff, who are often already highly qualified and highly paid, to receive an MBA.

“I’d rather see funding helping to kick-start careers or level up skills and opportunities. That’s why I’ve asked for a review of the senior leader apprenticeship standard to ensure it is meeting its aims.”

Also, should many others at level 7 be publicly funded as apprenticeship – given some look like universities simply cashing-in? Such as the £9,000 university professor apprenticeship (academic professional).

The IfATE’s wesbite states that “115 universities and other higher education providers across the country are committed to recruiting academic professional apprentices” and the expected uptake of this programme is “approximately 2,000 new starters per annum”. So 2,000 starts x £9,000 = £18 million.

The IfATE’s website adds: “Academic professionals work within the higher education sector delivering higher education teaching and undertaking research to support the development of knowledge within their discipline”…“Employers will set their own entry requirements, which will usually be a postgraduate degree level (level 7) qualification in an area of disciplinary specialism.”

The end-point-assessment is simply a one-hour presentation.

Also, FE Week revealed in April 2019 that plans for PhD-level apprenticeships had been thrown into doubt after the IfATE raised concerns they were not in the “spirit” of the programme. But we understand it is back on track and in January 2020 the institute said: “The proposal for a level 8 clinical academic professional standard has been approved for development following consultation with the Department for Education.”

There are currently three Level 8 apprenticeships in development – which – it seems – is being pushed through by the DfE regardless of IfATE concerns.

Email me your thoughts: nick.linford@lsect.com