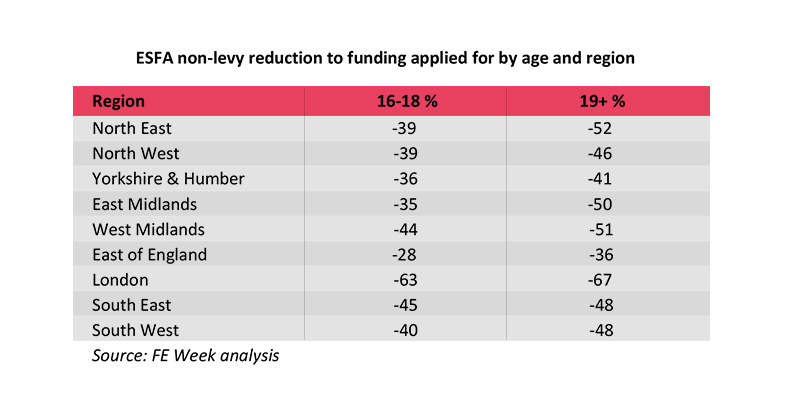 Apprenticeship providers in London are the biggest losers from the results of the much anticipated non-levy tender, after FE Week analysis revealed they were only awarded a third of their bid.

The ESFA last night informed providers of how much funding for apprenticeships with small employers they will receive from January 2018 to March 2019.

In the results letter sent out, the agency detailed how it decided the values each provider would receive.

“As set out in paragraph 6 of Attachment 2 of the ITT (Evaluation Guidance and Scoring Matrix), the awards for each individual budget were set through a pro rata process: for each of the 18 budgets, the Agency divided the total budget available by the total value of successful tenders to generate a pro rata percentage,” it said.

The 18 budget groupings were made up on England’s nine regions, and then two different age ranges– 16 to 18 and 19 and over.

FE Week launched a survey immediately after the results release, and providers have been telling us their outcomes ever since. From this, we have been able to work out the proportion of non-levy funding awarded by age and region (see table above).

Our analysis shows that London has been worse hit; providers from the capital have only received a third of what they applied for.

At the other end, providers in the east of England came out on top after being awarded nearly two thirds of their bids. The variations came about as the ESFA attempted to manage demand across the country.

The second biggest losing region was the west midlands, followed by the south east.

London apprenticeship providers have been expressing their disappointment.

“As a successful college provider which has increased its apprenticeship delivery substantially over the past two years, delivering in a highly deprived part of London, this is an extremely low award,” Stewart Cross, director of information and integration at the College of Haringey, Enfield and North East London, told FE Week.

“About 90 per cent of our current delivery, like many in London, is to non-levy payers,” Mr Cross added. “We will run out of non-levy funding by April at our current rate and SMEs and learners in Tottenham and Enfield will suffer as a consequence.”

Others, who failed to get a single penny in the tender, were even more annoyed.

North East Employment & Training Agency Ltd, a provider which has been running for 30 years and is rated ‘good’ by Ofsted, bid for just over £300,000, a tender which was “realistic based on our current levels of delivery”, according to its managing director Stephen Briganti.

He told FE Week his tender was successful but the pro rata awarding process saw any potential award fall below the £200,000 minimum requirement and the “end result of this is that we are being offered nothing”.

“To find out we have then been made unsuccessful based on a pro rata calculation taking us below the minimum threshold is devastating news,” he said.

“Had we been greedy/unrealistic in our request, we may well have received an allocation in line with our actual request.”

Some providers were just relieved to get any award considering the “year we’ve [FE] all had”.

After receiving £595,559, even though he bid for £1,044,500, Malcolm Armstrong, the managing director of Access Training Limited, based in the north east, told FE Week: “Not sure how I feel. After the year we’ve all had, anything could have happened. So, I am relieved we’ve got a contract, but disappointed in the allocation.

“Holding on to the fact that it is an ‘initial allocation’. We already had two growth cases approved so hopefully we’ll get increases through the year.”

The non-levy tender debacle has been going on for a year now and has been plagued with problems and subsequent delays.