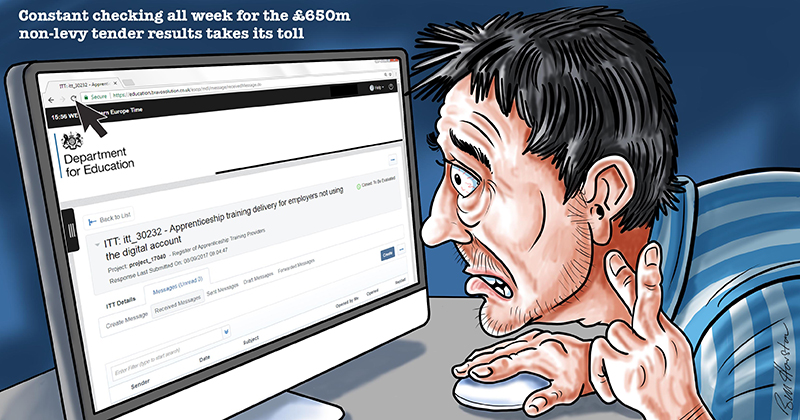 The long-awaited non-levy tender results, for funding apprenticeships with small (non-levy) employers, have been revealed by the Education and Skills Funding Agency this evening.

It follows a worrying few days for providers, after it was announced on the Bravo tendering site last Friday that after a temporary ‘postponement’ they would be out some time this week.

The actual notices of decisions have not yet been made public, and it only emerged that the results had been shared with providers shortly after 10pm.

FE Week has already launched a survey inviting providers to share their experiences, which can be reached here, and will be reporting further tomorrow.

The survey asks ‘how much was your levy tender cap’ and ‘how much non-levy tendering (January 2018 to March 2019) did you actually bid for’, along with questions on how much they received and how providers feel about it?

FE Week reported on November 17 that the second attempt at tendering for the £650m tender round had been postponed yet again.

The ESFA said at the time this was due to it needing more time to evaluate the high volume of applications.

The process had though been plagued with problems, with providers submitting nearly 1,000 clarification requests.

The ESFA also needed to verify provider tender cap calculations within individual submissions, which in many cases they challenged.