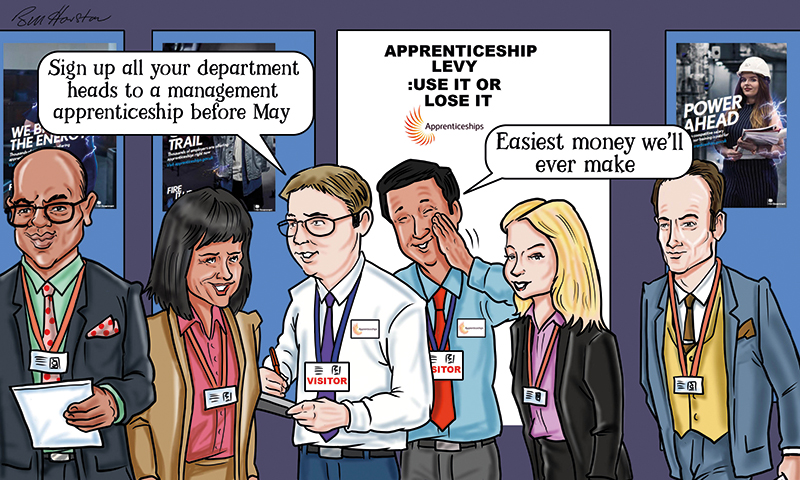 The government is looking into whether apprenticeship delivery is being adjusted to account for apprentices’ prior learning, a sign that funding overclaims could soon be clamped down on.

A tender was launched by the Department for Education last week for suppliers to research if and how providers and employers are adapting training and the associated costs to take into account the prior learning of apprentices.

It comes ahead of the National Audit Office’s second probe into the apprenticeship programme since the launch of the levy, which will examine whether it is providing value for money.

Prior learning refers to skills and knowledge gained by learners before they start their apprenticeship, and must be taken into account by providers when negotiating a price with an employer to ensure cash is not being used to teach an apprentice something they already know.

“We may take action to recover apprenticeship funding where this happens,” the Education and Skills Funding Agency (ESFA) rules for 2018/19 warn.

The DfE declined to comment on the reasoning behind its new tender, but FE Week understands the government considers non-compliance with the prior learning rule to be a major issue.

And a highly respected funding auditor has told FE Week that apprenticeship providers are typically not complying.

Stephanie Mason, head of further education and skills at the audit firm RSM, said: “The ESFA strengthened their funding rules this year and make it very clear that they will claw back funding when providers fail to reduce apprenticeship funding for prior knowledge, skills and behaviour.

“When conducting reviews since the introduction of the levy, we typically find providers have not fully accounted for prior learning.”

The Institute for Apprenticeships and Technical Education (IfATE) “flagged concerns about how best to ensure that prices for apprenticeship training were being appropriately adjusted to take account of prior learning”, according to the minutes from a meeting of its approval and funding committee last June.

The committee flagged some specific standards to the DfE for consideration of how the department should monitor how prior learning was being taken into account for apprenticeships, however the names of the standards were redacted and the institute has refused to share them with FE Week.

An IfATE spokesperson said: “The institute and our partners on the quality alliance take the concerns flagged by the committee seriously.

“Our quality statement stresses that an initial assessment of prior learning against the standard is a key facet of quality apprenticeships.

“We recognise that it is an important precondition of designing training plans that are tailored to individual learners’ needs, and also for ensuring value for money.”

Last March it was revealed that employers were paying the maximum amount in more than 95 per cent of apprenticeship starts since May 2017, when maximum funding rate caps were introduced.

And Ofsted has been finding problems at apprenticeship providers like Citrus Training Solutions, where inspectors found last December that many of its 188 apprentices were enrolled on “inappropriate” programmes which merely accredited existing knowledge, skills and behaviours.

Such as in the case of level two construction learners who completed their course in the first few months of the 12-month course with “very little training”.

Leaders and managers at Citrus Training Solutions were “unaware that many apprentices do not learn anything new” and are “not fully conversant with the funding requirements of an apprenticeship and so claim funding for apprentices who have not completed any learning”, according to the report.

“Assessors readily acknowledge they will not submit a claim for the completion of the apprenticeship for another eight months, even though they do not plan any further training.

“They state that this is to comply with the minimum apprenticeship duration that is set by the ESFA and the Institute for Apprenticeships.”

DfE has intervened in providers that are not teaching apprentices new skills before.

Last year, the ESFA terminated its contract of Premier People Solutions Limited after Ofsted found many of its 686 civil service apprentices were not developing substantial new skills, knowledge or behaviours.

In her annual report for 2018, Ofsted chief inspector Amanda Spielman highlighted how apprentices were “not learning anything new”, but were just getting accreditation for knowledge and skills they already had.

A NAO spokesperson confirmed that its upcoming review of apprenticeships will address whether the apprenticeship programme is providing value for money, and said, as part of that “we will assess spending and budgeting, oversight and number and types of apprenticeships”.

It comes after its 2016 report warned that without more robust risk-planning the reforms risked seeing repeats of the frauds that plagued failed Individual Learning Accounts.

The scheme was scrapped in 2001 after abuse by unscrupulous providers that led to a reported £67 million fraud.

Expressions of interest for the DfE’s contract have to be submitted by February 15, with the research due to start in the week commencing April 1. The final report will be issued on August 30.