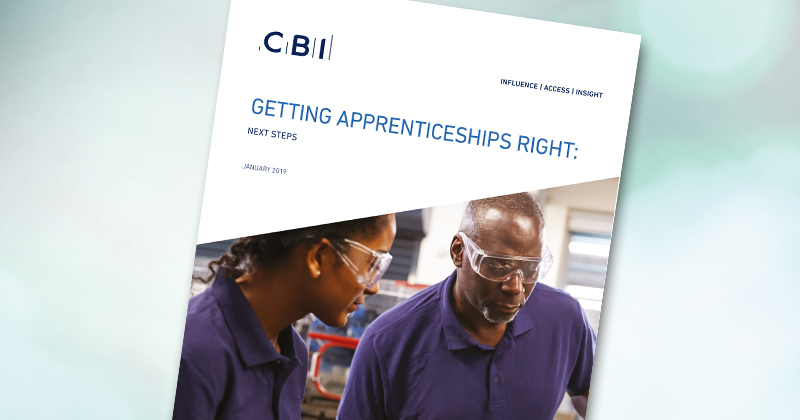 Employers should be allowed to appeal for more time to spend their apprenticeship levy funds if the standards they want to use are still in development, the Confederation of British Industry has said.

Its new report, ‘Getting apprenticeships right: next steps’, published today, calls on the government to introduce a process for such employers to appeal to the Institute for Apprenticeships on a “case-by-case” basis for the “sunsetting period” to be extended.

It’s one of a number of recommendations put forward by the business organisation to ensure apprenticeships meet employers’ needs into the future, as the government seeks to evolve the system almost two years after the introduction of the levy.

The government should “introduce an appeals system for extending the sunsetting period for those employers with standards which are still in development”, the report said.

John Cope, the CBI’s head of education and skills, said its “motive behind such an appeal system is that we want to get apprenticeship starts up, and we don’t think that employers should be penalised for something they don’t control”.

The appeals system would come into play where a standard is still in development, and is predicted to take longer to get approved than the time left on an employer’s levy funds.

It “would in essence be the employer saying, it’s not my fault, can I get my levy funds held – and so commit them – until the standard is in place? At which point then the apprentice can start”, Mr Cope explained.

He was unable to say how many businesses were likely to be affected, nor how much money was at stake, as he said the report was based on qualitative research rather than a survey of the CBI’s members.

“It is an issue that does come up quite often, and I suspect that it will come up more and more as we get closer to April,” he said – in reference to the date when unspent levy funds will begin to be lost.

The CBI report includes a number of recommendations for both the government, and for the IfA, which formally takes on responsibility for the development of the T-level programme today, and changes its name to the Institute for Apprenticeships and Technical Education.

It urged the government to “allow the institute to set its own success criteria for the technical education system – including progression, wage data and the closing of skills gaps – with a legal reporting responsibility for its findings to ministers” and to “set out how in future traineeships will interact and link to both apprenticeship standards and T-levels”.

The IfATE should also be “given an advisory role on any future changes to the levy rate”.

Recommendations for the institute include carrying out a review of “existing standards, to ensure that there is no duplication or narrow programmes” and to “raise its profile with employers”.

It should also “ensure it has enough frontline capacity” so that it can make the standards process more efficient, and to “provide full transparency over funding decisions, including the financial models used”.

The IfATE’s chief executive, Sir Gerry Berragan, said he welcomed the report “which clearly recognises the integral role the institute has at the heart of technical education reform”.

“We will build on our experience in apprenticeship standards to develop high-quality T-levels that provide the skills our employers need to bolster our economy and allow learners to thrive in their chosen career,” he added.

The Department for Education has been approached for a comment.