A crack team of seven top principals has been chosen by the FE commissioner to advise government officials on skills policy, FE Week can reveal.

The seven, who make up Richard Atkins’ principals’ reference group, will be used as a sounding board for officials on topics including the development of T-levels.

Speaking exclusively to FE Week, Mr Atkins said he was “very anxious” that Department for Education officials – many of whom are new to working in FE – “get to meet some of the outstanding principals” in the sector.

“It’s very important that all these new colleagues consult with the sector,” he said.

“There are lots of ways of doing that, but one is to get a group of some of our most experienced and successful leaders to give feedback on policy development on a whole range of things that involve colleges.”

The group, who aren’t paid for the role, will have “four to six meetings a year, here at the department”.

These meetings will be “partly to hold me and my team to account, and partly for them to be consulted by officials in the department on policy”.

The first of these is planned for later this month, and will include “a discussion around T-levels, with the team here that are developing them,” he said – while apprenticeships and skills minister Anne Milton is due to attend the second meeting.

“I want Anne to celebrate the fact that we’re bringing the group together and we’re going to use the group to consult with,” Mr Atkins said. 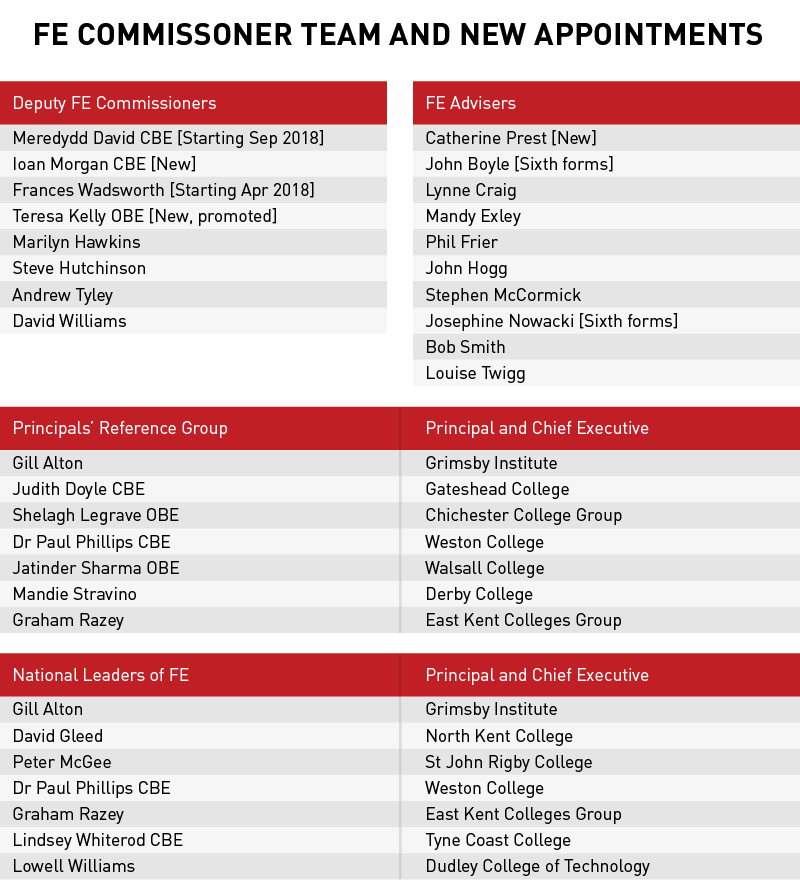 Each of the seven – five of whom oversee ‘outstanding’ colleges, and two who lead ‘good’ colleges – underwent a rigorous selection process before being chosen.

Shortlisted candidates – selected from the “20 or 30” principals who applied – had to complete a case study based on “a college with problems” and how they would deal with them, followed by a panel interview.

As well as “gender mix and the geography mix”, Mr Atkins said he was particularly interested in principals that had “improved colleges” rather than those who’d “inherited an ‘outstanding’ college, because it’s quite hard to go further”.

“I’m really pleased with the group I’ve got. I think I’ve got some really good principals there,” he said.

Appointment of the reference group comes alongside a move by the commissioner to double his team of deputies, as part of his drive to slash the number of colleges at grades three or four.

The four new recruits – who include two principals who will retire from their colleges later this year – mean Mr Atkins now has eight deputies who will help him to carry out “diagnostic assessments” at colleges at risk of failing.

Richard Atkins’ army of National Leaders of FE is starting to take shape, as the first seven recruits are announced.

The aim of the programme, first announced in October, is to use the expertise from successful colleges to support struggling institutions.

It’s a “developing piece of work”, according to the FE commissioner, and seven college leaders have been appointed so far out of a target of 20.

The group is distinct from the principals’ reference group – although there is some overlap in terms of membership, as “some members of the steering group applied to do both, they wanted to do both”, he said.

“We want these colleges to be the ones that will help grade three colleges – or possibly grade four – to improve.”

Each national leader is expected to support “a number of colleges that require help to improve”.

But it’s not just the principal who will be involved.

“What these colleges have signed up to is that they and their management teams are ready and willing to go out and help,” he said.

“What I found as a principal at Exeter was that people didn’t want me for long – they usually wanted my head of MIS or my head of teaching and learning.”

A college that needs to improve – perhaps having had a diagnostic assessment – would be put in touch with their nearest NLFE by Mr Atkins and his team.

For example, for a college in the north-east “we might say, I’m going to ring Lindsey Whiterod [Tyne Coast College principal] and introduce you, and we’re going to ask her to come over and talk to you to see if we can establish a partnership,” he said.

The expectation is that each of these partnerships will lead to an application to the £15 million strategic college improvement fund, also announced in October.

This cash can be used to develop an improvement programme and a tailored package of support – which can also include the costs of the lead college.

NLFE colleges will get a “very small stipend” of around £10,000 a year for expenses “to spark off the initial engagement”, Mr Atkins said – but not enough to cover all their costs.

A bid to the improvement fund is “one of the ways they would recover their costs”, he said.

Could the FE commissioner be coming to your college?

The latest weapon Richard Atkins’ college improvement armoury could see him and his team visit up to 60 colleges to carry out “diagnostic assessments”.

These involve two-day visits to colleges at risk of failing – particularly those that have received multiple grade threes in a row – for what he describes as “amazing free consultancy” from his team.

So far 40 per cent of the pilot assessments have either caused colleges to enter full intervention, or siy at risk of doing so.

Mr Atkins estimated there are “about 60 colleges that could benefit” from one of the assessments, although “they won’t all be urgently in need of intervention or failing”.

Every college he has visited so far has been positive about the process – although “chairs tend to be keener than principals”, he said.

“I’m hoping the majority say ‘we know what the issues are, this is what we’re doing and they’re all going to dealt with’,” he said – but some “will need to take pretty urgent action”.