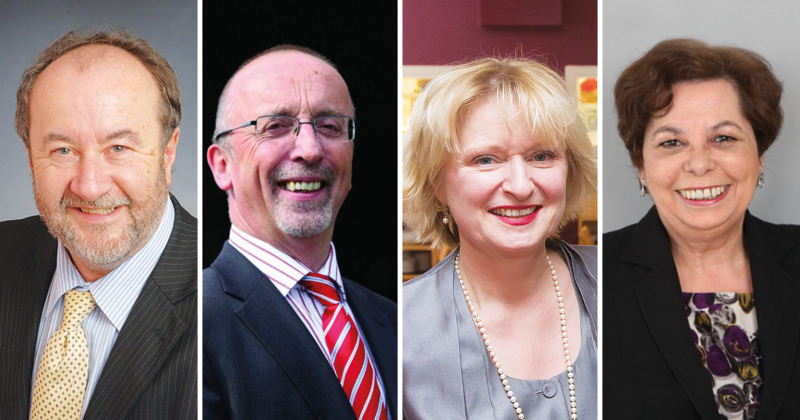 Four new deputies have been appointed to support the FE commissioner in his drive to slash the number of colleges rated grade three or four, FE Week can exclusively reveal.

The new recruits – which include two principals who will retire from their colleges later this year – mean Richard Atkins now has an army of eight deputies who will help him to carry out “diagnostic assessments” at up to 60 colleges at risk of failing.

Ioan Morgan (pictured above far left), Meredydd David (middle left), the principal of Reaseheath College, and Frances Wadsworth (middle right), the boss of Croydon College, are the new faces in the team, while Teresa Kelly (far right) has been promoted after two years as an FE adviser.

The roles, advertised by the Department for Education in October, will last two years and come with a salary of £700 a day.

This will include assessments at some colleges with a grade three overall, particularly those that have been graded three several times in a row.

Speaking exclusively to FE Week, Mr Atkins said “about 60 colleges would benefit” from the process, although “they won’t all be urgently in need of intervention or failing”.

“Those colleges will need to take pretty urgent action as a result of our diagnostic. So that’s why we’re doing it,” he added. “And then I hope in a couple of years’ time not only are there fewer grade fours in the sector, there are fewer threes.”

Other aspects of Mr Atkins’ new improvement toolbox, first announced by the ex-education secretary Justine Greening in July, include overseeing a £15 million college improvement fund, and the National Leaders of FE programme.

The first five deputy FE commissioners were appointed in November 2015, alongside a team of 16 advisers, to support the previous commissioner Sir David Collins carry out the area reviews of post-16 education and training.

Ms Hawkins and Mr Williams were among that first cohort, having both previously been FE advisers.

And in October that year, Mr Hutchinson and Mr Tyley were promoted from adviser to deputy, at the same time as Mr Atkins was appointed as Sir David’s successor.