MPs furious at the long-running Learndirect debacle are asking the public accounts committee to find out why the government supported the sale of the provider’s apprenticeships business, consequently delaying its Ofsted inspection.

Labour’s shadow skills minister Gordon Marsden and Wes Streeting, the MP for Ilford and a former president of the National Union of Students, are demanding answers after FE Week uncovered new information about the failed sale to Global University Systems, of which they claimed “something isn’t passing the smell test”.

The timing of this deal, which eventually fell through in December 2016, was significant because it was used as a reason to delay an Ofsted inspection that had been scheduled for November 4 that year, as was revealed in a recent National Audit Office report, and a situation the Commons public accounts committee of which has been highly critical.

I think there are serious questions to be answered by the Education Secretary, the ESFA and Ofsted about their dealings with Learndirect Ltd, LDA and GUS

To push the deal through, then-education secretary Justine Greening had to agree to transfer delivery of apprenticeships funding from Learndirect Ltd to Learndirect Apprenticeships Ltd, which would subsequently end in a sale to GUS.

Ms Greening did sign off on this, but FE Week has learned she might have had to curve EU procurement rules to do so.

A letter sent to Learndirect on October 4, 2016, signed by former ESFA boss Peter Lauener on behalf of Ms Greening, said: “Please note, if requested in the future, the SFA is unlikely to agree to the transfer of the contract from Learndirect Apprenticeships to any other legal entity.

“The SFA would have to comply with the Public Contract Regulations 2015 in relation to the award or transfer of the contract to a different legal entity.”

In other words, had the government followed procurement rules, it should have put the contract out to tender, unless it had already assured itself there would be no interest.

The ESFA sent the letter agreeing the sale to Ofsted, and despite serious concerns about the quality of provision, the inspectorate applied its referral policy and cancelled the inspection, believing the sale would take place.

Any delay to intervention is controversial, as Learndirect Ltd continued to receive millions of pounds in ESFA funding each month, even though its provision was eventually found to be severely wanting after the inspectorate eventually visited the following March.

“I think there are serious questions to be answered by the education secretary, the ESFA and Ofsted about their dealings with Learndirect Ltd, Learndirect Apprenticeships Ltd and GUS,” said Mr Streeting, who had a public spat in September with the skills minister Anne Milton about the Learndirect saga.

“Something isn’t passing the smell test here and the PAC needs to get to the bottom of this,” he told FE Week.

Mr Marsden added that “we already knew” the DfE’s handling of Learndirect had been “shambolic” and claimed this new evidence, of potential mishandling of the sale to GUS, was even more concerning.

“It now looks as if they [the DfE] may not have followed due process in terms of approving the funding itself,” he said.

“That is a very serious admission which I would hope and am sure the PAC would want to take strong notice of in their hearing on Monday.”

FE Week asked the DfE if it had complied with procurement rules and explored wider market interest in the sale, but it would not be drawn.

“Under the new regulations from 2015, contracts can under certain circumstances be modified during their term without a new procurement procedure taking place,” said a spokesperson.

The DfE had previously told FE Week that officials from the ESFA met with GUS representatives in August 2016 and gave approval the following month, but refused to furnish us with the exact date or who attended.

Even though the ESFA insisted that novation of Learndirect Ltd’s contract to Learndirect Apprenticeships Ltd was a one-time offer, it subsequently agreed to a transfer that would take place in May, which Learndirect used to try and delay Ofsted’s inspection in March.

But the inspectorate rejected the request and went in for a full inspection, which ended in its infamous grade four and started a legal battle between the two organisations, eventually won by the watchdog.

The delay to Ofsted’s visit has been highly criticised by the PAC and is set to feature prominently in next week’s scheduled hearing.

Public Accounts Committee inquiry into the funding of Learndirect Ltd

The Public Accounts Committee will grill the organisations involved in the Learndirect saga on Monday (January 15).

The hearing will dissect the findings of last month’s National Audit Office report, which examined the monitoring, inspection and funding of the nation’s biggest FE provider. 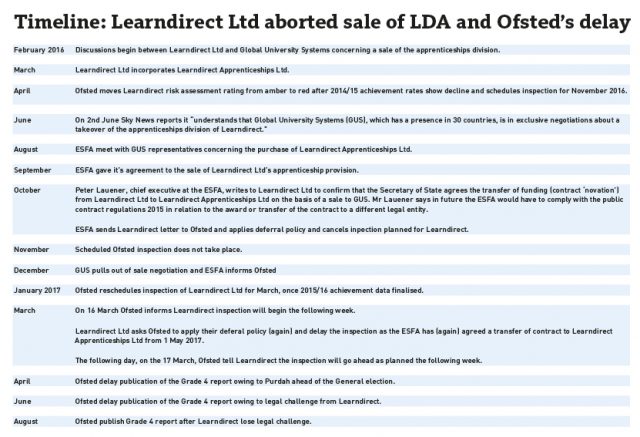