The government has coughed up the full £5.4 million Ofsted requested to visit all new apprenticeship providers as its crackdown on poor provision continues.

In an exclusive interview with FE Week, Paul Joyce (pictured), the inspectorate’s deputy director for FE and skills, said the amount was nothing less than what was requested and will be provided from now until the end of March 2020.

However, he could not say how many more inspections or inspectors the money was likely to fund to carry out the mammoth task.

Potentially as many as 1,200 providers could now be in scope for a two-day monitoring visit. The Education and Skills Funding Agency confirmed last month that any apprenticeship provider which Ofsted deems to have made insufficient progress in one or more themes under review would be stopped from taking on new apprentices.

These restrictions will stay in place until the provider has received a full inspection and been awarded at  least a grade three for its apprenticeship provision. Full inspections for providers which receive an “insufficient” rating will now take place within six to 12 months.

At the time of going to print the inspectorate had so far published 59 early monitoring visit reports of apprenticeship providers and deemed 12 of them – 20 per cent – to be making insufficient progress in one or more themes. Two of these – Key 6 Group and Training Solutions – have been rated as insufficient in every category.

Half of the insufficient-rated providers are currently barred from taking on new apprentices, according to the register of apprenticeship training providers, but the fate of the other six is not yet known.

September has also seen a surge in the number of reports, including “insufficient” reports, being published.

So far this month 14 early monitoring visit reports have been published, of which five had an insufficient rating. In comparison, just 17 reports were published across the whole of August and just two of these were deemed insufficient.

Mr Joyce said that Ofsted would be analysing the results of the reports, but added that “no specific pattern” was currently emerging.

“I think it’s the nature of the new providers that we’ve got out there,” he said. “In many cases we know very little about them in terms of their previous history, so we send inspectors out and their job is really to report as they find. The reports that have been published reflect what we have seen.”

Mr Joyce would not be drawn on whether the Education and Skill Funding Agency could do more to crack down on rogue apprenticeship providers, including by limiting how quickly new providers can grow.

“That’s a question and a matter for the ESFA to deal with,” he said. “I would hope, and I’m sure, that our monitoring visits will be useful to them and help inform their processes.

“But again – their policies, their decisions.”

The “insufficient” reports have thrown up several common issues between the providers, including poor governance, low quality teaching and a lack of off-the-job training.

Apprentices at Care Training Solutions, which was rated insufficient across the board by inspectors, were said to be not making enough progress, with inspectors warning that “too many apprentices are behind in every element of their apprenticeship”.

Leaders at Unique Training Solutions were criticised for not holding employers “sufficiently to account when they do not play their part in helping meet the expected requirements of the apprenticeships programmes,” meaning that “too many” apprentices did not receive enough off-the-job training within working hours.

Not enough off-the-job training was also said to be an issue at the Education and Skills Partnership, and at the Mitre Group where inspectors found that “most of the training [apprentices] complete in their own time and not during their working hours”. Quality of provision and improvements were said to be “too slow” at Mears Learning.

At Peacocks, senior management were described as being “too slow to respond to significant weaknesses that exist in the apprentices’ programmes and the quality of the education and training that apprentices receive”, while apprentices at Mooreskills complained to inspectors that “they are not developing new skills or enhancing their existing knowledge”.

Watertrain was criticised for “using the apprenticeship programme to enable employees to gain qualifications in existing skills and knowledge”, and inspectors noted that some apprentices “reported that they did not want to be an apprentice and did not see how they are gaining anything from the programme”.

Safeguarding was criticised at N-Gaged Training and Recruitment, and the report said no safeguarding arrangements existed for their few apprentices aged under 18 when they attended residential training. At Entrust, governance and oversight of the apprenticeship programme was described as “insufficiently thorough”.

Key 6 Group’s apprenticeship provision was described as “not fit for purpose” and its governance called “poor” in a report that saw it rated “insufficient” across the board.

“The board of directors do not hold the managing director and the director of education to account for the poor teaching, learning and assessment and weak progress that apprentices make,” inspectors reported.

Leaders at Securitas were also slammed by inspectors, who said their “self-evaluation of the quality of provision lacks realism and reflective analysis” and noted that most apprentices “do not have a choice about enrolling for the apprenticeship training programme.

“As a result of this compulsory training, apprentices do not enjoy their learning or understand its nature,” the report said. 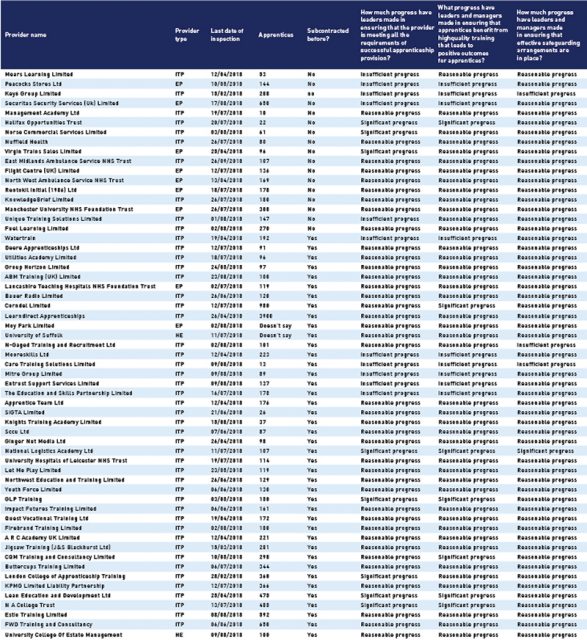