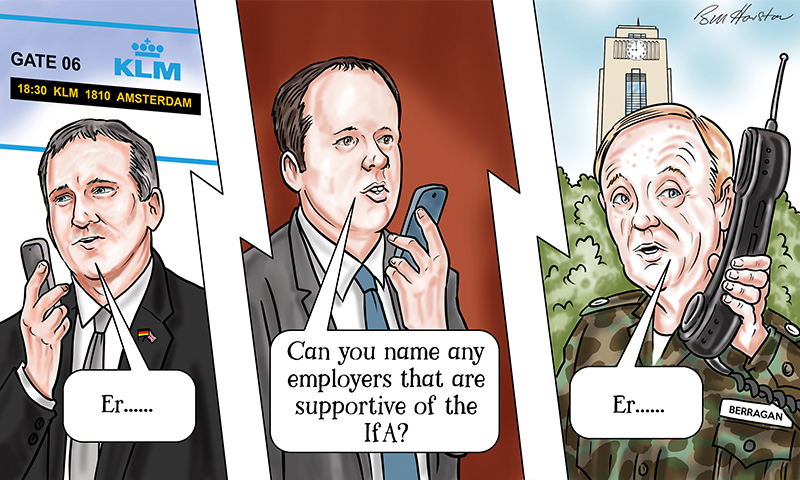 The education secretary was unable to name a single employer who supported the Institute for Apprenticeships in an interview with FE Week editor Nick Linford this week.

Damian Hinds had arranged the interview while on his fact-finding trip to Germany and the Netherlands.

He was asked if the English version of employer ownership was working, given the well-documented frustration among employers towards the IfA.

The IfA was set up by the DfE last April and is an “employer-led” non-departmental public body of approximately 80 staff, according to the DfE.

Mr Hinds was quick to insist the IfA was doing a “really important job” and that there was “a lot of enthusiasm” from employers about apprenticeships.

That begged the question whether Mr Hinds could name any – which he couldn’t, despite being asked five times.

This failure by the education secretary followed a similar silence from the IfA itself last month.

More than 150 businesses joined forces with the Chartered Management Institute at the end of August to fight against the IfA’s proposals to slash the funding band for the popular chartered manager standard by £5,000.

FE Week asked the institute if it could name any employers that supported the recommendation, but was told “not at this time”.

Its Faster and better programme, launched in December to speed up its processes and make its policies more transparent, had been prompted by employer feedback.

Skills minister Anne Milton has also spoken about the need to take a “big stick” to the institute to push it to being even faster and even better.

In contrast, Mr Hinds insisted in response to Mr Linford’s questions that the IfA was doing a “really important job in bringing together employers to create a quality assurance system”.

“I think it’s a really important part of the architecture of the overall programme,” he said.

When asked why there was so much animosity towards the institute, Mr Hinds insisted that “what I hear from businesses is a lot of enthusiasm for the apprenticeship programme”.

This response prompted Mr Linford to ask him if he could name any employers that were “enthusiastic about the institute”, given that it is meant to be “representative of an employer-led system”.

“I know people want to see, and rightly so, the standards coming through, and it’s been good to see that process having gained pace, and I think that’s much to be welcomed,” he continued.

He was pressed again to answer the question, but again failed to name any – insisting he needed to board his plane, which was due to take him from Dresden to Amsterdam for the next stop on his week-long fact-finding mission.

A further three attempts to ask the question met with the same response.

The exchange followed repeated criticism of the IfA’s handling of the recent funding band review which launched in May.

That process looked at the funding caps allocated to 31 standards, including some of the more popular ones, to assess whether they offered good value for money.

The institute started communicating with the employer groups that developed the standards last month, and a number of them were unhappy with the outcome.

Of the nine recommendations that FE Week is aware of, six have resulted in a proposed funding cut.

Employers have hit out at the IfA, claiming that the process wasn’t fair or transparent, with proposed funding bands bearing no relation to the costs for delivery submitted as part of the review.

The letter to the employer group behind the level six chartered manager standard even said “you told us that a reduction to funding would lead to providers exiting the market and reduce provider ability to deliver high quality training provision.”