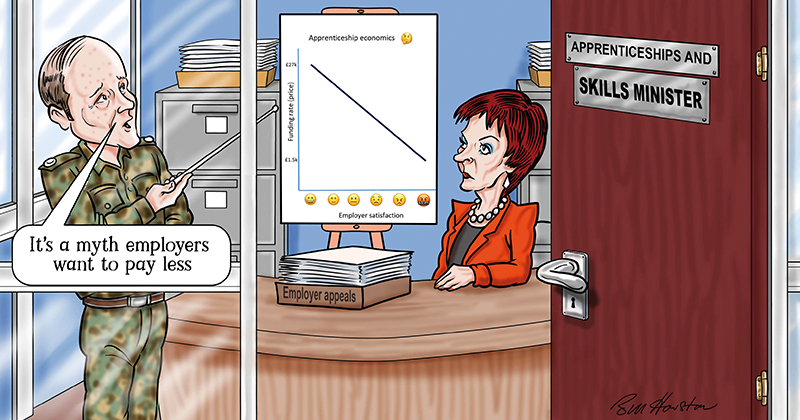 The Institute for Apprenticeships will soon confirm controversial changes to dozens of apprenticeship funding rate bands, according to the skills minister.

Writing in her monthly column in FE Week, Anne Milton said the rate changes will be published online “shortly” and further reviews will take place in the autumn.

To date, the IfA has refused to publicly reveal the recommendations from its funding band review, and said last month the details are subject to change until a final decision is made by the Department for Education.

Rate changes, according to the IfA, need to be signed off by the Secretary of State for Education, Damian Hinds.

However, the IfA has been communicating with the relevant employer groups about the changes in order to give them a chance to appeal, and several have come forward to reveal the planned outcomes of the review.

The Chartered Management Institute is currently fighting to overturn plans to slash the maximum funding rate to three popular management apprenticeship standards, including one that is set to lose £5,000. An online appeal, led by the CMI, has received backing from more than 150 employers.

Petra Wilson, director of strategy at the CMI, said the “overwhelming outcry” against the plan demonstrates that the government’s plans to reduce the funding “makes so little sense”.

However, some Trailblazers have received more welcome news. The funding band for the level three aviation ground specialist standard is set to be doubled, while the level three senior healthcare support worker standard is in line for a massive 67 per cent increase. 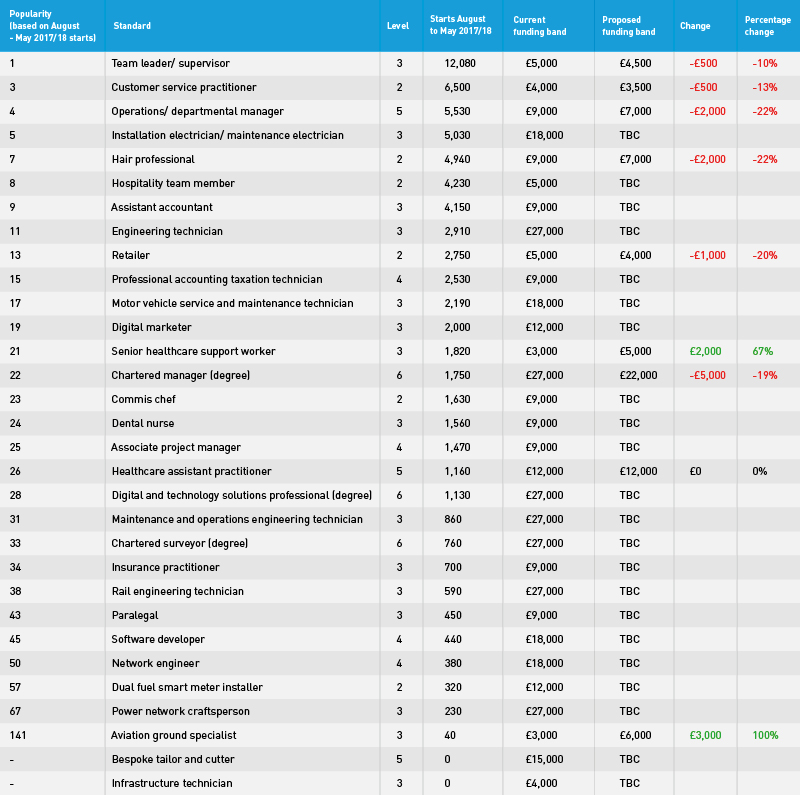 The picture so far on the 31 standards in the review

Mark Dawe, the chief executive of the Association of Employer and Learning Providers, has warned the level of uncertainty created by the review is having serious negative repercussions for the sector, and said the “complete lack of transparency and evidence is unjustified”.

Writing in the association’s newsletter, he stated: “Employers and providers are now saying it is incredibly risky to plan, invest in resources, invest in staff, design programmes, etc, if at a whim the IfA can adjust funding with no warning. This will lead to less investment and ultimately lower quality.

“At a time when everyone is working so hard to deliver high quality programmes with employers it is astounding that the organisation that is tasked with maintaining quality is actually undermining the system and wanting to pay less for ultimately poorer quality.

“No one can deliver this amazing apprenticeship policy if the organisation at the heart of the system has lost the trust and respect of everyone operating within the system, and their actions are working against the fundamental principle of high-quality apprenticeships.”

As previously reported in FE Week, the IfA has committed to implementing rate increases with immediate effect and providing notice of at least two months before a confirmed rate reduction would apply.