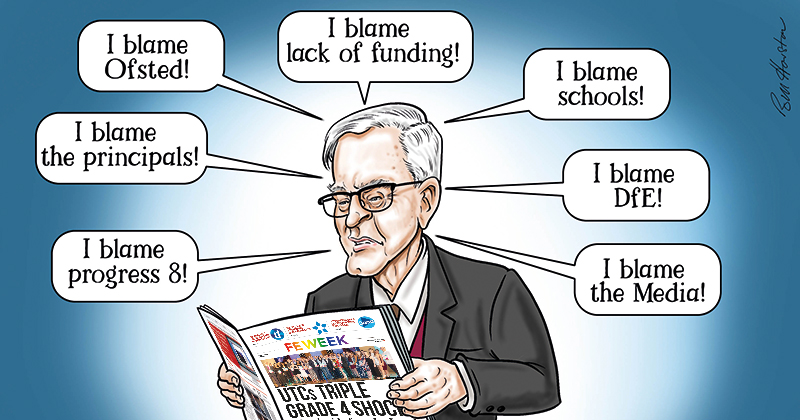 Ofsted has dealt a series of devastating blows to university technical colleges this week, with three of the 14-to-19 technical and vocational institutions rated “inadequate” in a week.

Inspectors were damning in their criticism of UTC@Harbourside, Derby Manufacturing UTC and Health Futures UTC in grade 4 reports published between June 28 and July 4.

The latest verdicts mean that over a quarter of the UTCs inspected to date have been given the lowest possible overall grade.

This is sure to be an embarrassment to the Conservative party, which pledged to have a UTC “within reach of every city” in its 2015 manifesto.

Nonetheless, Charles Parker, boss of the Baker Dearing Trust, which backs UTCs, insisted it was “absolutely not” time to admit the experiment had failed.

“We are disappointed at our current Ofsted records, which we are working hard to improve,” he acknowledged.

“However, the excellent destinations of our students and the satisfaction of parents and employers mean it is much too early to say that standards are bad.”

UTCs’ destination data is “the best of all schools in the country”, yet this is not taken into consideration by the education watchdog, he said.

Lord Baker, the trust’s co-founder and architect of UTCs, also told FE Week that he believed the current inspection regime was unfair for this reason.

“A UTC is not a school or a college, it is a hybrid animal,” he said in an interview in May.

“Ofsted takes no account of employability in inspections and that is a big test for us.”

However, a spokesperson for the watchdog rejected these claims.

“Inspectors take into account the destinations of UTC pupils, but as we set out in our handbook, no single measure determines the outcome of an inspection,” he said.

Ofsted inspects UTCs as schools “because that is the legal status they have”, and all schools are inspected against the same criteria.

“Clearly some UTCs manage to meet these requirements,” he added.

In the same FE Week interview, Lord Baker hit out at schools that refused to comply with their legal requirement to open their doors to technical and vocational education providers, including UTCs – as set out in the Baker clause amendment to the Technical and FE Act.

And in an interview with The Times newspaper in 2017, he blamed “poor governance and mistakes made” where UTCs had failed.

A further 13 have been rated “requires improvement”, meaning a massive 64 per cent are rated less than good.

And to date eight UTCs have closed after failing to attract enough pupils, owing in large part to the difficulty in persuading them to change schools at 14.

David Russell, the chief executive of the Education and Training Foundation who formerly led on vocational education reform at the Department for Education, took to Twitter to vent his anger at the latest reports.

“This was the 100 per cent inevitable outcome of UTCs’ policy, as many inside DfE said at the time,” he tweeted.

“This hideous experiment in ‘technical education’ policy must stop.”

The most critical of the three reports was for UTC@Harbourside, published on July 4 just two days after the school announced it would close in 2019 after failing to recruit enough pupils to make it financially viable.

Bullying – some of it racial in nature – was found to be “frequent”, which led to some pupils having a “miserable time” at the school.

“Adults do not act decisively enough to stop it and prevent repetition.”

Pupils and learners at the school, which opened in 2015, are “hugely disappointed” with its “failure to live up to their expectations”, the report said.

The school’s governors said they “fully accept the findings of the inspectors and are committed to implementing the recommendations” for its remaining pupils.

The UTC@Harbourside report came just a day after Health Futures UTC in West Bromwich was branded “inadequate” across the board.

Leaders and governors at the school, which also opened in 2015, were deemed “ineffective”, having missed “significant” teaching weaknesses, according to inspectors.

“Teaching has been weak and consequently, students have made very poor progress,” the report said, adding that the top team had failed to recognise these failings until exam results were released in August 2017.

However, Ofsted acknowledged that the school’s new interim principal, Ruth Umerah, was starting to turn things around.

Leaders and governors at Derby Manufacturing UTC drew criticism for their “over-generous” view of quality, which “prevented leaders and governors from taking appropriate action to secure the required improvements”, according to the June 28 Ofsted report.