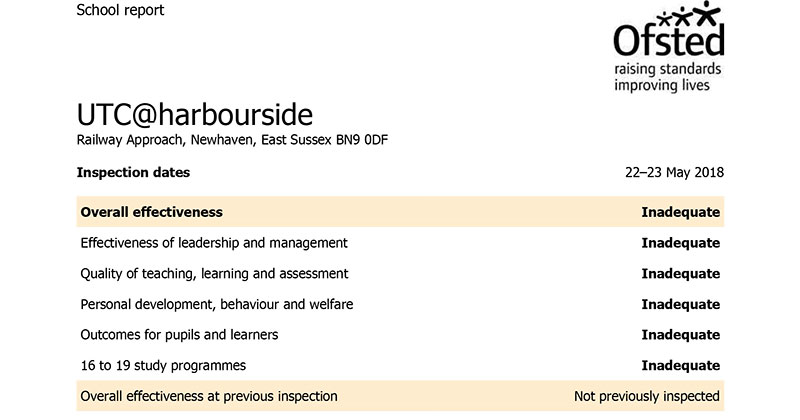 Bullying – some of it racial – is rife at a university technical college that announced closure earlier this week, according to its damning ‘inadequate’ Ofsted reporting published this morning.

UTC@Harbourside is also accused of “too often” breaking “too many promises”, in a report that gives the 14 to 19 technical institution the lowest possible rating across the board.

The school, based in Newhaven, East Sussex, is the third in the space of a week to have received a grade four rating, and the 10th overall.

“Bullying, especially in key stage 4, is frequent,” the report said.

“Some of it is racial. Adults do not act decisively enough to stop it and prevent repetition.”

Some pupils in year 10 have a “miserable time” at the UTC “due to bullying, some of a persistent nature and which results in a few pupils being isolated”.

Pupils in this age group are “very clear that the size of the cohort means that relatively minor disagreements too often get blown out of proportion,” inspectors noted.

Safeguarding arrangements are deemed to be “not effective”.

Pupils and learners at the school, which opened in 2015, are “hugely disappointed” with its “failure to live up to their expectations,” the report said.

“Too many promises made by the UTC have been broken too often.”

Learners on 16 to 19 study programmes “report that they feel ‘lied to’ by the UTC to get them to join and have been let down since,” inspectors found.

Outcomes for these learners are “not good enough”, and many report feeling not “challenged to excel” and “unsupported in many aspects of their academic studies”.

Teachers “frequently teach outside their specialism due to budgetary constraints”, and only “some” have the “correct technical knowledge to deliver their subject accurately”.

Senior leadership is described as “chaotic”, with the “substantive principal” not present during the inspection.

“The deputy principal is determinedly trying to rescue the UTC”, inspectors noted.

UTC@Harbourside’s governors said in a statement they were “disappointed” by the report but that they “fully accept the findings of the inspectors and are committed to implementing the recommendations contained in their report for the students that remain with us until the UTC closes in August 2019”.

An acting principal, Lisa Jepson, “has already started to address the issues raised in the report”.

“We will continue to work closely with Ofsted to secure improvements and guide our current year 10 and 12 students to successfully completing their courses in July 2019.”

On Monday the UTC became the ninth of the 14 to 19 technical institutions to announce plans to close.

It will shut its doors in August 2019 after failing to recruit enough pupils to become “financially stable”.

The college will remain open and “fully committed” to ensuring current year 10 and 12 pupils successfully complete their courses by next July, according to the governors.

It also the 10th to have received Ofsted’s lowest rating, and third in the space of a week – after Derby Manufacturing UTC on Thursday (June 28), and Health Futures UTC yesterday (July 3).

The UTC model has faced substantial problems since its inception in 2010. Many have struggled financially after failing to attract the right number of pupils, as well as with quality.

In January, it was revealed that UTC@Harbourside was one of three UTCs to have agreed to pay back over £500,000 to the government after over-estimating pupil numbers.