Young people in the UK feel their school or college are the worst in the world at preparing them for adult working life, a new report has revealed.

A new report by the OECD called ‘Youth Voice for the Future of Work’, released to coincide with WorldSkills 2019 competition in Kazan, surveyed 842 18-24 year-olds in the United Kingdom, which has sent 37 such people to compete at the tournament.

Asked how well their school or college prepares them for adult working life, more respondents answered ‘not very well’ or ‘not at all’ than answered ‘very well or ‘quite well’.

The OECD deducted the negative responses from the positive responses, which meant the UK scored -20 per cent on that question of the report, putting them stone dead last out of 19 countries.

WorldSkills UK chief executive Neil Bentley-Gockmann called the findings “uncomfortable reading” for the UK and should serve as a “wake-up call” for the government and anyone involved in careers advice to think ‘is this working?’

These findings will heap extra pressure on the government to do more to enforce the Baker Clause.

The legislation, so-named for Lord Kenneth Baker who conceived of it, requires schools to publish a policy statement online to show how they ensure providers can access pupils to talk about technical education and apprenticeships, and details of their career programmes.

Yet it was revealed earlier this year that two-thirds of schools were flouting the legislation, and the DfE admitted  “no action was taken against schools in England that failed to comply with the Baker clause” between January 2 2018 and January 2 2019″.

And while former skills minister Anne Milton announced in January she would write to ten academy chains which were flouting that law to remind them of their duty, only five letters were sent.

Association of Employment and Learning Providers chief executive Mark Dawe said: “These appalling findings underline why the Baker Clause is worthless unless the government and Ofsted inspectors work together to enforce it.”

He said it “was about time” for a wholesale review of the careers guidance in England, concerning its value for money.

Germany, which came second-to-last on -19 per cent and , was the only other nation to score in the negative figures.

It gets worse when the sample is reduced to the 756 of UK respondents who did not go to a fee-paying secondary school, where the UK scored -24 per cent. 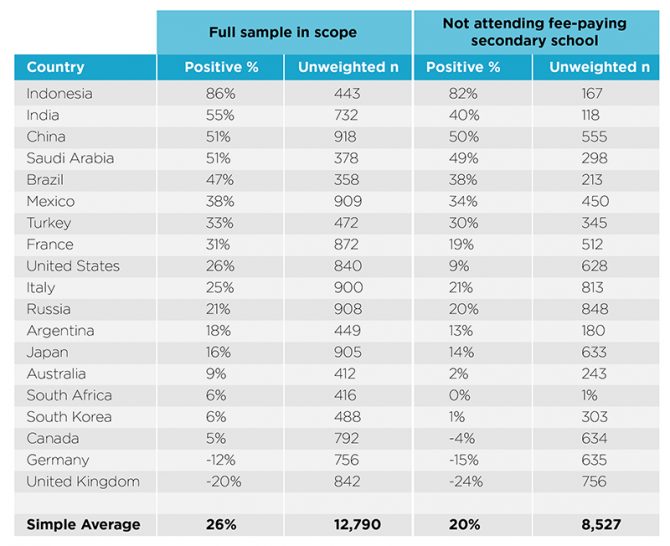