A specialist college for young people with autism has been criticised by Ofsted for failing to make students feel suitably protected from harm.

Inspectors found that staff at Farleigh Further Education College in Frome, Somerset, were too slow to act when learners reported bullying or harassment.

The college, owned by Aspris Children’s Services, was given an “inadequate” Ofsted grade as a result and the headteacher has now stepped down.

Farleigh Further Education College was rated “good” in its last full inspection in November 2018. But, following the inspection in February 2022, Ofsted rated it “inadequate” in all five key areas of its report.

At the time of the inspection, 26 learners were resident at the college and 40 were attending during the day.

Ofsted found that managers did not respond quickly enough to learners’ disclosures or involve relevant external agencies. “For example, they do not respond to or act on learners’ accusations about their peers swiftly enough.

“Staff are sometimes too slow to take action when learners report bullying or harassment,” the inspectors said.

They also highlighted issues regarding behaviour, noting that leaders and managers have not ensured adequate “mutual respect between staff and learners at the college”.

Although staff have received diversity and inclusion training, too few were found to “model inclusive behaviour or use appropriate language” towards learners.

“Consequently, a minority of learners show a lack of respect for staff and each other. When learners are disrespectful to their peers, staff do not always take appropriate action.

“As a result, at times, learners feel uncomfortable and less valued,” the inspectors said.

As well as failing to make sure that young people felt safe, the report said that leaders had failed to ensure that learners were studying a “well-planned or coherent curriculum”.

A spokesperson for the college told FE Week that the governors and leadership team recognised the points raised in the report and have put in place an extensive action plan to address the issues as “swiftly as possible”.

The spokesperson added: “There is currently a recruitment process in place to appoint a new headteacher and an extended leadership team, which will ensure the required progress is sustained going forward.

“In addition to this, new safeguarding systems have delivered significant improvements and the college team are fully focused on supporting our students to achieve the best possible outcomes.”

'From the moment learners enter the college premises, they encounter a very welcoming, caring and calm environment,' inspectors said... 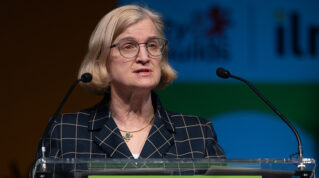