Final funding bands for 12 of the standards that were part of the Institute for Apprenticeships’ review have been published, following sign off by the education secretary Damian Hinds. 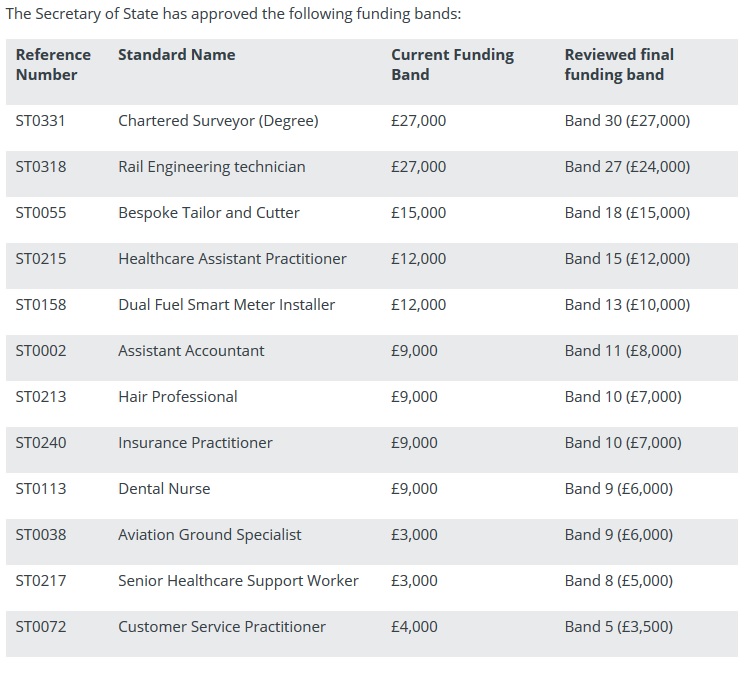 Reviewed funding bands for the remaining 19 standards have not yet been sent to Mr Hinds, including the controversial management apprenticeship standards.

The IfA has said it expects the process will be finalised in late 2018.

Explaining the review, the IfA today said: “We used our new funding process, adapted to reflect that these standards are already being delivered. Throughout the process, we worked collaboratively with trailblazers to ensure the review was carried out in an open way.

“As part of this process we considered a range of factors, including the costs submitted by providers, advice from trailblazers, data we hold, consistency across similar apprenticeship standards and the expertise of our route panels and a provider panel.”

The institute claims to have only recommended changes to current funding bands where “there is evidence that justifies a change”.

It added: “The Institute is working closely with DfE to monitor the impact of these funding band changes over the coming months. We will continue our work to bring more standards into the new 30-band structure.”

This is the first time the IfA has publicly revealed the funding band changes, having previously refused to share them while they were still at the recommendation stage.

However, a number of employer groups shared the outcomes with FE Week, including those behind the healthcare, customer service and aviation ground specialist standards, which have all had their final rates confirmed today.

In addition to the three management standards, the retailer standard is also missing from today’s list.