Festive foodbank campaign relaunches as part of Good For Me, Good for FE

The Good for Me, Good for FE campaign is halfway to its target of generating £1 million in social value, following a blast of volunteering by colleges.

The sector-led charity drive has accumulated 23,000 volunteering hours, which have been put through a calculator to work out their monetary value towards the target.

Additionally, the campaign’s target of donating 20,000 items to foodbanks has been reached.

‘Campaign highlights the true generosity of staff and students’

Good for Me, Good for FE was set up by London South East Colleges, East Coast College and Loughborough College in June, with the goal of raising £1 million in social value by the end of the academic year.

The three colleges’ principals – Sam Parrett, Stuart Rimmer, and Jo Maher – have said: “Seeing how the sector has come together to support this initiative is truly amazing.

“We already know what important roles colleges play in their communities, but this campaign highlights the true generosity of staff and students when it comes to supporting others.”

After such a “challenging” year, the campaign’s success is “even more impressive,” they argued, and reaching halfway “is testament to our incredible sector and we thank every single staff member and student who has contributed so far.

“We look forward to hopefully smashing our target next year – and to seeing how much more can be achieved by our fantastic sector.”

A number of colleges have put on special events to generate social value, including a Santa dash organised by East Coast College.

There has also been a community college kitchen set up by Trafford College, as well as a social action day at Loughborough to support a local homeless charity.

London South East Colleges has donated 124 Christmas hampers to foodbanks, while Lancaster and Morecambe College asked attendees to an open day to bring an item for the foodbank collection.

Lincoln College also combined forces with Morrisons and a local construction firm to provide ingredients and recipe cards for students as part of its ‘eat well and learn well’ initiative.

Staff have also been volunteering in other roles, such as football coaches or supporting St John Ambulance, in their communities.

Good for Me, Good for FE was recently buoyed by a £750 donation by the Skills and Education Group, won in an online vote by readers of FE Week and its sister paper Schools Week.

The campaign says this money has now been donated to the Trussell Trust foodbank charity.

The Scouts, the FA, the National Association for Voluntary and Community Action, and SLQ Sports Leaders have also helped offer volunteering opportunities across the country.

Christmas, Good for me good for FE 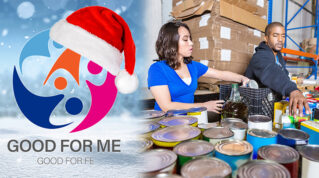 Festive foodbank campaign relaunches as part of Good For Me, Good for FE