Colleges were hit hardest by the move to apprenticeship levy funding, FE Week analysis of new figures published by the Department for Education have revealed.

The statistics, which included the number of starts per provider for the first time, showed that colleges’ share of the market dropped from 31  to 26 per cent from 2016/17 to 2017/18, while their starts plummeted 35 per cent.

At the same time, ‘other public funded’ providers – which includes universities and employers – saw their share go up from eight per cent to 12 per cent as starts jumped 17 per cent.

Meanwhile independent providers’ share of the market remained at 61 per cent over the two years, while starts fell by 24 per cent – the same as the sector average.

That’s an 11 percentage point bigger fall than the sector-wide drop of 24 per cent, revealed in last week’s final year figures.

Some of this fall in starts will have been the result in changes to rules around subcontracting, which hit colleges that had previously subcontracted much of their provision.

West Nottinghamshire College, which previously subcontracted the overwhelming majority of its provision, had just 1,440 starts last year – down a massive 79 per cent on the previous year’s total of 6,830.

Meanwhile, there were 45,450 starts in ‘other public funded’ providers last year – an increase of 17 per cent on the previous year’s figure of 38,910. 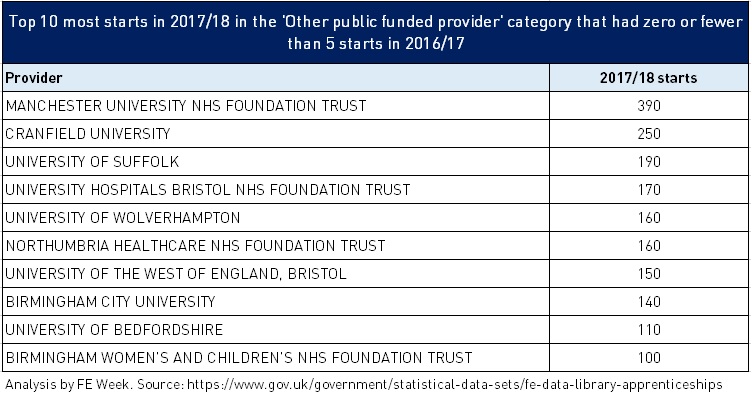 They made up six of the 10 ‘other public funded providers’ with the most starts in 2017/18 that had zero or fewer than five starts the year before.

The remaining four were NHS trusts – reflecting the fact that the country’s largest employer has a £200 million levy pot to spend.

Former skills minister Nick Boles warned colleges more than three years ago not to let independent providers “nick your lunch”, as he called for them to deliver more apprenticeships.

FE Week reported last year that colleges were failing to heed his words.

A freedom of information request by the Association of Employment and Learning Providers revealed that 74 per cent of all apprenticeship starts in 2015/16 were with independent providers, while colleges were responsible for just 21 per cent.

Last month the current skills minister Anne Milton struck a different note from her predecessor by telling the Association of Colleges conference that she wanted collaboration between colleges and private providers in delivering apprenticeships.

Her words were a change from what was written in her speech, which urged colleges to be a “real competition” for private providers.