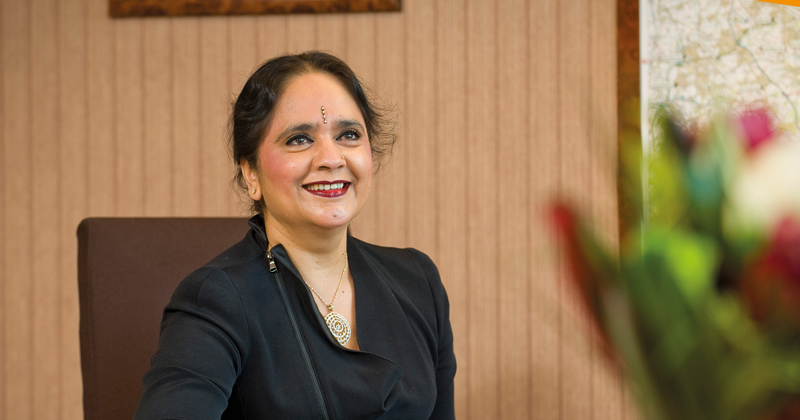 The largest college provider of apprenticeships in 2016/17 will have to cut more than 100 jobs in an effort to make £2.7 million in savings.

West Nottinghamshire College is blaming it on changes to subcontracting rules.

It had contracts to deliver apprenticeships and traineeships worth £19.8 million last year, but the overwhelming majority of this was subcontracted.

The college has now admitted it will be a “significantly smaller apprenticeship-provider going forward”, due to changes in the apprenticeship system brought in last May, including new subcontracting rules.

“Budget pressures caused by a reduction in the number of apprentices and on-campus students –which is consistent with the national trend – means we must take decisive and necessary action to ensure we remain on a stable financial footing moving forward,” said Dame Asha Khemka, the college’s principal (pictured above).

This would mean “reducing our staffing levels to balance income with expenditure”.

“We have already taken a range of measures to reduce our operating costs but, regrettably, job losses will be unavoidable,” she admitted.

The college said in a statement that it needed to save around £2.7 million, and was currently consulting on proposals to reduce staff numbers by 100 full-time equivalent posts.

According to the new rules for contracting and subcontracting, which came into force last May, lead contractors can no longer subcontract entire apprenticeship programmes.

Instead they must “directly deliver” at least some of each programme.

The rules state that “the volume of training and/or on-programme assessment that you directly deliver for each employer must have some substance and must not be a token amount to satisfy this rule”.

And all subcontracting arrangements must be agreed with the employer before the start of an apprenticeship programme.

In addition, many providers that were previously subcontractors are now able to contract directly with employers to deliver apprenticeships.

Much of the college’s apprenticeship provision to date has been “delivered on a subcontracting basis” through a “network of private training providers with sector-specific expertise”.

“This highly successful approach has formed a key part of its apprenticeship strategy and enabled the college to expand its offering,” it said in a statement.

It said it expected to see “this model of delivery disappearing altogether over the next two years” with “all provision coming directly from the college instead”.

As reported by FE Week last year, the college subcontracted 82.4 per cent of its apprenticeship provision in 2015/16, which earned it £3.2 million in top-slicing fees from provision worth £15.5 million.

At the time it appeared confident it could weather the funding changes: Andrew Martin, the college’s deputy principal said they were an “enormous opportunity to expand apprenticeship provision”.