Over 200,000 students studying the qualifications up and down the country will today find out whether all their hard work has paid off, and what their next step in life will be.

*** The live blog is now closed. Sorry if your pictures didn’t make it in – we’ve been inundated with stories and there simply hasn’t been time to add them all. We really appreciate you sending them and don’t forget to send them in next year. Congratulations to all the learners who got their results today and best of luck for the future.***

As with previous years, we’ll be sharing some of the success stories from colleges, sixth form colleges and providers from across England on this live blog. Stay tuned!

Sixth form student heading into higher apprenticeship, after impressing employers on his placement 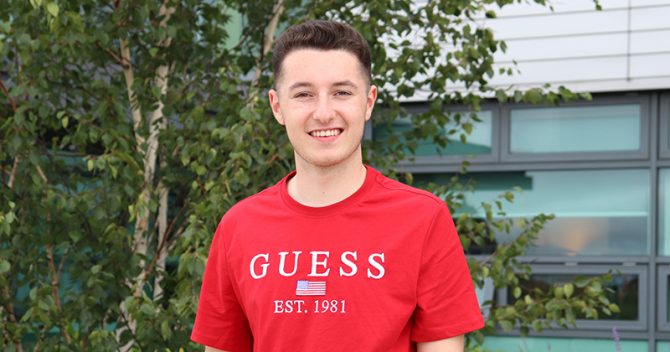 Jacob Moat, an A-level student at Bede Sixth Form, will be enjoying the best of both worlds after being accepted onto a higher apprenticeship.

18-year-old Jacob (pictured), who achieved a B in media studies, a B in business and a C in economics will be undertaking a level 6 chartered surveyor apprenticeship with PD Ports, which will involve one day a week studying at Northumbria University.

Jacob said he was “ecstatic” about being accepted onto the apprenticeship after partaking in the college’s Logistics Academy programme, which aims to help raise young people’s awareness of the logistics industry by taking part in a series of workshop, masterclasses and site visits. 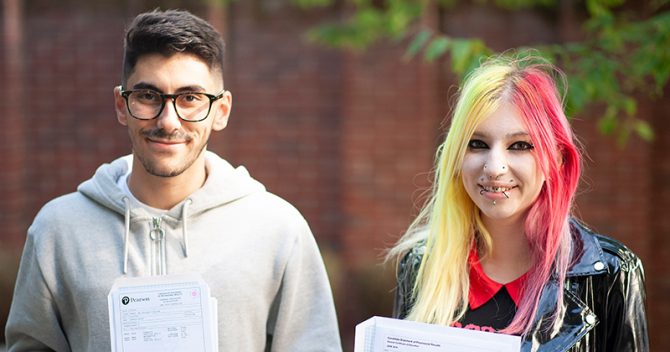 A student from Barnet and Southgate College has achieved an A* in physics and chemistry and an A in maths, despite only having arrived in the country from Syria three years ago.

Karim Bakkar (pictured left) has secured a place at Birmingham University to study an integrated BSc and Masters degree in nuclear engineering.

The 20-year-old had to complete an ESOL course before enrolling at the college, but said he had had “a unique time here and I have loved every minute”.

The congratulations of FE sector leaders on A-level results day has been tinged with warnings over the future funding for those qualifications and the apprenticeships school leavers may go on to.

The chief executive of the Sixth Form Colleges Association Bill Watkin said his members had delivered another “outstanding” year of A-level results, and large specialist providers of sixth form education were leading the way in delivering a “broad, high-quality education to young people”.

However, he said the decline in entries to English literature and language A-levels was a concern, and it is important the government and regulators develop a much clearer explanation about grade boundaries and how they are set.

The latter comes after FE Week reported yesterday on leaked copies of Edexcel’s and OCR’s grade boundaries, which revealed A-level maths students needed as little as 55 per cent for an A grade.

Ashworth said: “Congratulations to all those students who have worked so hard to give themselves a chance to thrive in a very uncertain climate.”

But he added: “AELP’s major concern is that employers would currently like to be offering them up to 25 per cent more apprenticeship opportunities if the funding was available and the shortage is being felt most outside the big cities.”

After Boris Johnson said it was “vital” the government invest more in FE and skills, Ashworth said that extra investment needs to be “pumped in quickly” if the prime minister “doesn’t want thousands of disaffected young people on his hands”.

An Exeter College student is celebrating getting an A*, an A and a B in a year when he had to care for his mother, who has been suffering with aggressive breast cancer.

Jack Smith, who lost his father in 2012, studied A-levels in physics, maths and further maths and will be studying physics at the University of Exeter.

The 17-year-old said: “It has been a tough time for me, but Exeter College have helped me along the way and I’m thrilled to be going to study physics at university.” 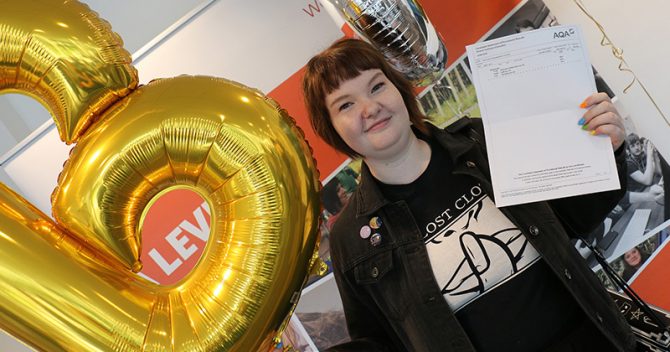 A student at Vision West Nottinghamshire College did not let a curved spine stop her achieving A-levels and getting her hands on a scholarship with the University of Sheffield. 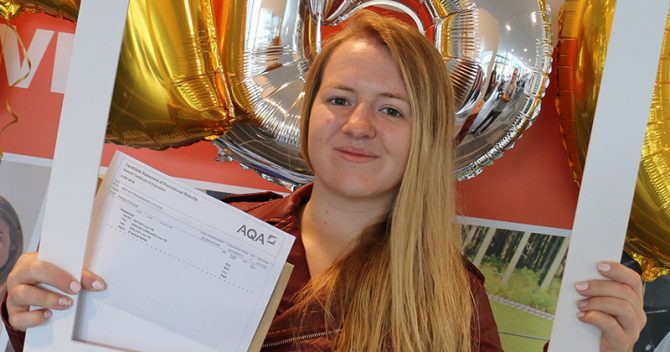 The 19-year-old, who has double-curved scoliosis, which causes curvature of the spine, said: “I’ve had 19 years to get used to my health problems, having scoliosis and my legs are different lengths, but I just get on with things and it’s not stopped me achieving.”

While Emily prepares to start her life at university, 18-year-old Phoebe Stirland (pictured left) will be starting in the world of work – with an apprenticeship.

After an “exhausting and demanding” exam period, from which she gained an A in history, B in English language and C in biology, she will start next week at Launay’s Restaurant and Bar as a chef.

“Most of my friends are going to university, but I’m really looking forward to getting into the world of work,” said Phoebe, who also boasted about her skills with lemon meringue.

UTC sending its first ever student to Oxford 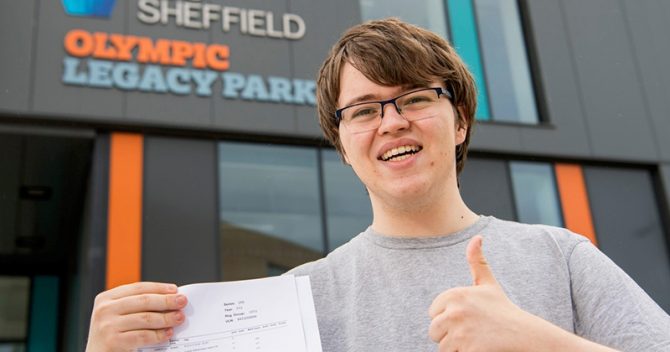 Christian Marriott (pictured) has become the first ever student from his UTC to secure a place at Oxford.

The 18-year-old from UTC Sheffield Olympic Legacy Park scored an two A* grades and an A in maths, further maths and computer science, ensuring his place at Mansfield College to study maths.

Christian said he “had a great time at the UTC”, as he enjoyed both the academic and technical learning, and the opportunity to taking part in other projects, such as the Vex Robotics competition. 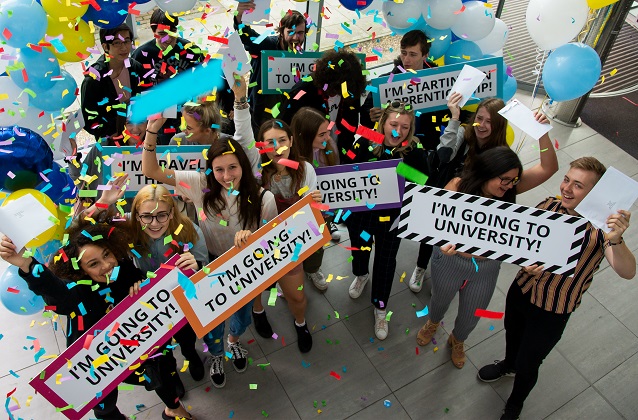 A Harlow College student who did not get the chance to take A-levels on their first time around is “really happy” after opening their results today.

22-year-old Bevan Collins is off to the University of York to study theoretical physics after securing an A in maths, a B in physics, and a C in further maths.

He said: “I didn’t get a chance to sit my A Levels the first time around so I was determined to come back to education to take them now.”

Getting his results, he added, was the “the culmination of a four year journey”.

Fellow Harlow student, 18-year-old Sarah Williams, was “overwhelmed” after receiving an unexpected A in politics, B in psychology and B in history.

“My goal was always to go to Sheffield to study History and now I’m doing it!”

Jack Esson (pictured far left) from Blackburn College is off to study for a degree in maths and computer science after getting the chance to partake in a national maths competition.

He achieved an A*, three As and a B in his A-levels after choosing to study at college for the “more adult environment” which allowed him to become more independent and take responsibility for his own studies, as opposed to a school setting.

While at college, Jack was also given the chance to take part in the UK Mathematics Trust Maths Challenge.

Joining him at Lancaster will be Leah Clare, who will be studying physics, astrophysics and cosmology after achieving three As and a B.

She said she had “thoroughly enjoyed” her course, with the standout moments being when she was able to meet a former college student who had gone on to study for a PhD. 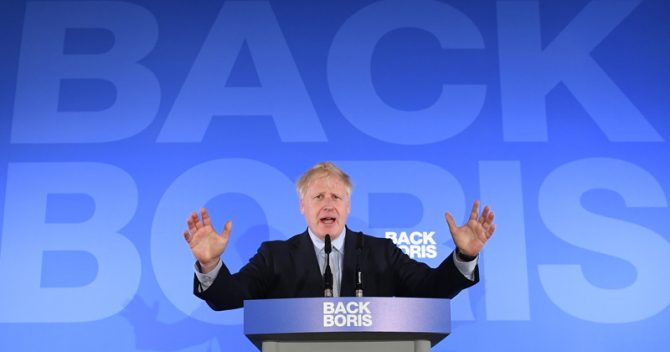 First, he forgot to appoint a minister for skills for nearly a week. Now Boris Johnson has forgot colleges also offer courses to do after A-levels in his congratulations to students picking up their results today.

In his message, the Prime Minister said his new government will do “all we can to improve funding for education and to give schools the powers they need to deal with bad behaviour and bullying so that pupils can learn”.

He went onto say that government “must focus much more attention on providing great apprenticeships for all those who do not go to university”, seemingly forgetting colleges also offer routes for school leavers.

His lapse comes after the Department for Education caused outrage by making the same mistake on Twitter, where it said A-level students could either go to university, do an apprenticeship, or get a job after they got their results, with no mention of college courses.

This could be seen as a further snub of colleges and FE from a prime minister who did not appoint a dedicated skills minister in his first reshuffle and instead shared the brief between education secretary Gavin Williamson and children’s minister Kemi Badenoch.

Johnson had promised during the Conservative leadership election to “do more to fund our amazing FE colleges”, then told the Commons as prime minister that it is “vital” to invest more in FE and skills.

18-year-old Uther Naysmith from Derby College has secured his place to study law at Oxford after scoring an A* in politics and As in history and french.

He said he had “really enjoyed” his time at the college, and it was his teachers who encouraged him to apply for Oxford, which he had not thought of doing before.

Other success stories from the college include Ethan Lee, 19, who gained A* grades across the board in English language, psychology and sociology.

He is off to the University of Nottingham to study cognitive neuro science and psychology, and said he was “on another level of relieved and thrilled” with his results.

Meanwhile, Jaiya Verma, 18, is “really pleased” with her A grade for Extended Project and B grades in English language, English literature and sociology.

She hopes to follow in her mother’s footsteps and become an English teacher, and will be studying English Literature at either Durham or Newcastle. 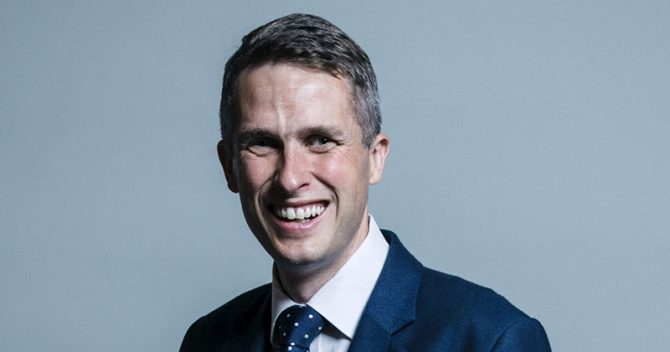 We kick off today’s blog with a message from new education secretary Gavin Williamson, who said everyone receiving results today should feel “proud” of their achievements – as should the “thousands of teachers that supported them in our brilliant schools and colleges”.

“Today marks the culmination of years of hard work which it’s right to recognise at this time of year,” he added.

“Of course, the minds of thousands of young people getting their results will soon turn to the next chapter in their lives, whether that’s a place at one of our world class universities, earning on an apprenticeship or entering the world of work – and I hope every one of them is excited about the opportunities that lie ahead for them and I wish them the very best of luck for their results today.”