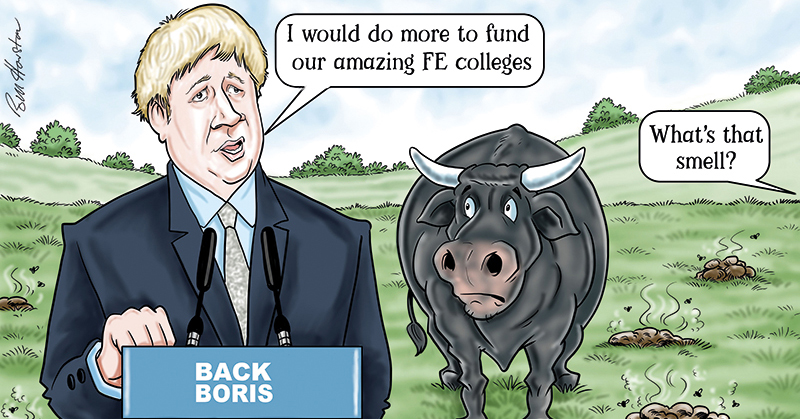 Conservative leadership favourite Boris Johnson has said he would “do more to fund our amazing FE colleges” if he won the race to be the country’s next prime minister.

In a speech launching his bid to be PM on Wednesday, he reiterated his pledge to “end the injustice of the education funding gap in primary and secondary schools”.

Johnson then declared: “Giving young people everywhere the same access, and the same freedoms and the same confidence to succeed, and do more to fund our amazing FE colleges that have been too often overlooked.

“Because it should be our fundamental purpose as a government to bridge not just the wealth gap, not just the productivity gap, but the opportunities gap between one part of the country and another.”

It was the first time the Conservative leadership frontrunner has mentioned plans for greater investment in FE.

His words were welcomed by the chief executive of the Association of Colleges, David Hughes, who tweeted: “I worked with him when he was Mayor of London and chaired the London Skills & Employment Board. After a shaky start he did learn about why colleges are important and genuinely I think he does #LoveOurColleges. We’ll remind him if needs be.”

I worked with him when he was Mayor of London and chaired the London Skills & Employment Board. After a shaky start he did learn about why colleges are important & genuinely I think he does #LoveOurColleges We’ll remind him if needs be https://t.co/5TAahMvhXK

But not everyone was convinced that Johnson would back up his words with actions.

“Where’s he getting the money from? It isn’t from income tax and we’ll have a big bill to pay if we leave the EU ASAP as he is intent on doing. I’m not sure investment in anything is possible in conjunction with his other “policies”. Nice sentiment, though. Yours, a cynic,” tweeted Zac Aldridge, vice principal at Derwentside College.

Johnson’s commitment comes after the high-profile post-18 education report by Dr Philip Augar said that poor funding in FE “has to be addressed”.

The report’s recommendations included an increase in the funding base rate for 16-to-19-year-olds and a £1 billion capital investment in colleges.

The base rate funding per 16-to-18-year-old students has been stuck at £4,000 per year for the past five years. Campaigns, including Raise the Rate, which is led by the Sixth Form Colleges Association, are calling for this to be increased to £4,760.

The Association of Colleges has meanwhile said the rate should be upped to £5,000.

Britain’s new prime minister will be elected in the week starting Monday, July 22.

Results from the first ballot of Conservative MPs, released on Thursday, showed Johnson well in the lead with 114 votes, followed by Jeremy Hunt in second place with 43 votes, and Michael Gove in third with 37 votes.

Andrea Leadsom, Mark Harper and Esther McVey were eliminated from the race after scoring fewer than 17 votes.

At the time of going to press, Johnson was favourite to become the next prime minister at odds of 1/5, according to betting company William Hill. Second favourite was Jeremy Hunt at 13/2, while Rory Stewart was third at 14/1.