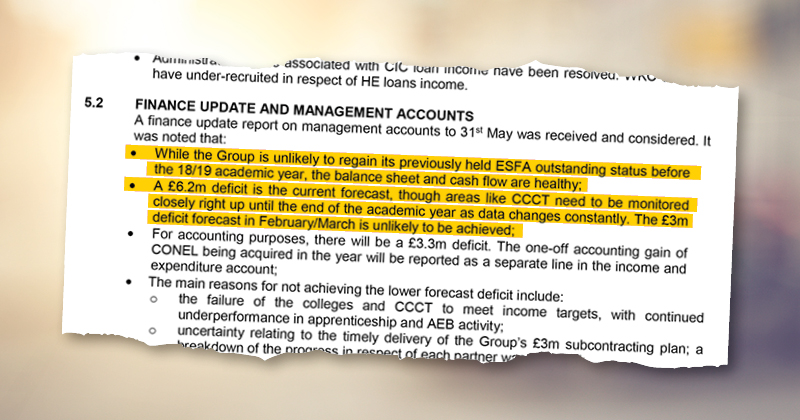 A huge London college group has defended awarding its staff up to a five per cent pay rise – even though it will result in its third annual operating deficit in a row.

The pay deal for Capital City College Group staff, announced on Wednesday, was described as a “landmark” by the University and College Union, and followed eight days of strike action by union members earlier this year.

But a spokesperson has confirmed to FE Week that it will cost the group more than £3 million – and will turn a projected break-even budget into a £2.3 million deficit.

“We are fortunate that, as a group, we have the financial strength to invest in improvements to our learners’ experience, as well as staff salaries – even if this investment may result in a short-term operating deficit,” he said.

CCCG had previously budgeted for a one per cent pay rise, which the spokesperson said would have cost £660,000, and had “forecast that the group would break even” this year as a result.

To make up for this loss the group will look at “ways to develop new sources of income” and at reducing its costs, including the potential for “not replacing certain jobs as they become vacant”.

It comes just months after the group’s chief executive, Roy O’Shaughnessy, took over the reins from previous boss Andy Wilson, who retired over the summer.

Jeremy Benson, the Department for Education’s deputy director for FE resilience and sustainability, warned that “governors have responsibilities” – to their communities, to students and as charity trustees – when he was asked about the deal at this week’s Association of Colleges annual conference.

“They have to make sure that the decisions they make, financial and wider decisions they take, do what the college is intended to do but also allow that college to be sustainable,” he said.

“I assume that the governors will have concluded that this is affordable and it won’t increase the risk of the college running into financial difficulties.”

The projected deficit for the current year follows a £5 million shortfall in 2016/17, according to the group’s accounts – the first since CCCG was formed in August 2016.

According to its most recent board minutes, from July, the group was expecting a £6.2 million loss in 2017/18, although the spokesperson said this has now been revised to £5.5 million.

He said the college is currently rated ‘outstanding’ for financial health by the Education and Skills Funding Agency.

However, minutes from a board meeting in May reveal that the “anticipated end-of-year assessment of the group’s financial health is ‘good’”, while the July minutes indicate that it is “unlikely to regain” its ‘outstanding’ status before 2018/19 – although they note that “the balance sheet and cash flow are healthy”.

CCCG is made up of three colleges – City and Islington College, Westminster Kingsway College and the College of Haringey, Enfield and North East London (CONEL) – as well as an apprenticeship provider, Capital City College Training.

Its income in 2016/17, before CONEL joined the group, was £80.7 million, according to the accounts, which also revealed the group to have assets of more than £258 million – the vast majority of which were its buildings – and “no external debt”.

The pay deal announced this week will see the majority of staff receive the full five per cent increase, backdated to September, while senior managers will receive less or nothing, depending on their salary.

UCU members will also not have their pay deducted for two of the eight days of strike action between February and April.

The union claimed that Mr O’Shaughnessy, who took up his post in September, had waived his right to a bonus as part of the deal.

However, the CCCG spokesperson said he gave up this right – which would have been worth up to 15 per cent of his £220,000 salary – when he was appointed earlier this year.

“This landmark pay increase, agreed at one of the largest college groups in England, sets the bar for others when it comes to the pay and conditions of staff,” said Matt Waddup, the UCU’s head of policy and campaigns.

In a statement from the UCU, shadow chancellor John McDonnell offered his congratulations to its members at the college for securing a “brilliant victory”.

“Congratulations to the governing body in agreeing this bold and progressive step forward and I hope this signals a change in direction that the whole sector can follow.”

Staff at six colleges across the country will walk out for two days next week in the first wave of action over this year’s pay award.

At the same time ballots will open on possible future action over pay at a further 26 colleges.

Staff were left bitterly disappointed in July when the AoC – which represents colleges on pay discussions – said it was unable to recommend a salary increase of five per cent, and was instead only able to propose a “substantial pay package” over two years dependent on government funding.