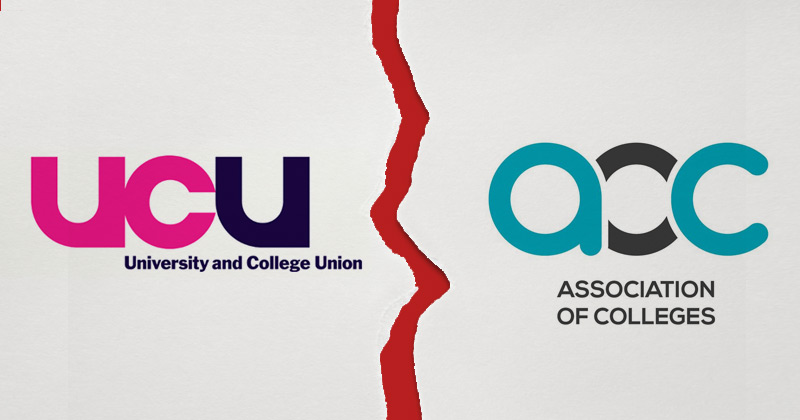 Disappointment has been expressed at the lack of a concrete offer following pay talks with the Association of Colleges, which is instead proposing a “substantial pay package” over two years dependent on government funding.

The unions met with AoC bosses on Friday to discuss college pay, and were looking for a better pay offer than the 1 per cent increase recommended last year.

University and College Union general secretary Sally Hunt described the resulting proposal as “bizarre”, and warned the pay issue needed to be resolved now if colleges wanted to avoid strike action in the autumn.

“We intend to pursue government for a specific cash injection for pay – to then be consolidated in the 2019 government spending review.”

But Ms Hunt said: “This bizarre offer does nothing to address the fall in pay that members in FE have suffered in recent years.

She did however “welcome” the fact that the AoC recognised that staff “need a pay rise”.

“UCU will work with anyone to call for more funding but as the employer body, the AoC cannot abdicate its own responsibility for improving staff pay,” she added.

“It is a well-understood truth that colleges have been hit hard in the austerity decade and simply cannot afford to match other pay awards,” he said.

“It is not right for the average teacher salary to be £30,000 in colleges, compared with £37,000 in schools. If proper funding is not forthcoming, that gap is likely to widen, making the recruitment and retention of staff even more difficult.

“We have called on the unions to work with us to demonstrate to government that additional funding in the sector is now critical.”

In its letter, UCU claimed that FE has reached “a crisis point on pay”.

After a “decade of real terms pay cuts”, senior lecturers are now earning around £9,000 a year less than they would if their pay had simply kept pace with inflation, it says.

And even in colleges that have honoured the pay recommendations from the AoC, staff have “suffered a real terms pay cut of 25 per cent since 2009”.

Trade unions also wrote to the AoC last month to spell out exactly why they have resubmitted a claim for a raise of five per cent for the next academic year.

They originally made the request at a meeting at the start of May, but the AoC said it would not consider a claim while some colleges were still in dispute with the UCU.

The National Joint Forum, made up of the unions representing college staff, had requested an across-the-board rise of around six per cent in April.

AoC boss David Hughes expressed regret at the time that it was unable to offer more than one per cent, but “current funding levels for colleges do not allow us to do so”.