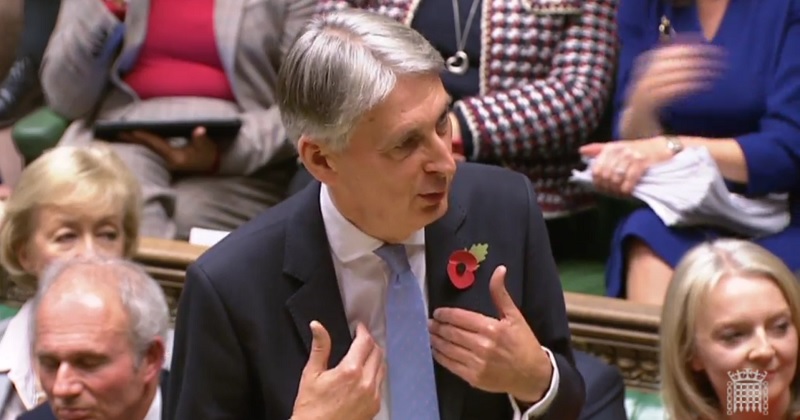 The 10-per-cent fee that small businesses must pay when they take on apprentices will be halved, the chancellor has announced.

Philip Hammond (pictured) told the Commons today that SMEs must now only contribute 5 per cent to the training, as part of a “£695 million package to support apprenticeships”.

The Treasury originally told FE Week the change would come into effect from April 2019, but has since backtracked on this and said no fixed date has been decided on yet.

It comes after the skills minister Anne Milton told the Association of Employment and Learning Providers conference in June that issues with the fee have been “noted”, but there would be no announcement on a rule change anytime soon.

Announcing the change in his Budget speech today, Mr Hammond said: “As well as backing businesses to invest and grow, we will also make sure British workers are equipped with the skills they need to thrive and prosper.

“We’ve introduced a new system of T-level vocational training, introduced the first £100 million into the new national retraining scheme and through the apprenticeship levy we are delivering three million new high quality apprenticeships in this parliament.

“That system is paid for by employers and it has to work for employers.

“Today, in addition to the flexibilities I announced earlier this month, I can announce that for smaller firms taking on apprentices we will halve the amount they have to contribute from 10 per cent to 5 per cent.

“In total this is a £695 million package to support apprenticeships.”

It is expected that the change to a 5 per cent contribution will only apply to new starters when the change comes into effect.

It is, however, not yet known if the contribution will also apply to levy-paying employers when their levy pot is empty.

The Treasury told FE Week these details would be decided on in early 2019.

The AELP has been heavily campaigning to remove the employer contribution rule as it believes it puts SMEs off apprenticeships, and is the reason why starts have fallen so much since the introduction of the levy.

Its chief executive, Mark Dawe, is ecstatic with today’s announcement.

‘This is a major and positive shift which AELP has been pushing hard for since before the levy was introduced and it should enable providers to work with smaller businesses to start getting back to offering apprenticeships to young people and local communities,” he said.

“We are grateful to Anne Milton and Robert Halfon for their significant efforts in making this happen.”

Shadow skills minister Gordon Marsden welcomed the change but labelled it as a “minor improvement”.

“This responds to the strong lobbying there has been from the sector, and in particular the AELP,” he said.

“It’s a minor improvement but it doesn’t address some of the key issues for small businesses with back-office admin or the failure of government to incentivise small businesses by creative use and support of the apprenticeship levy.”

The change follows Mr Hammond’s announcement at the Conservative Party Conference earlier this month that the annual apprenticeship levy transfer facility will rise from 10 to 25 per cent from April 2019.

He said he will also consult with businesses about further changes to the levy from 2020, following the slow take up and employer criticisms.

Smaller employers can also access the funds generated through the levy, although they have had to pay 10-per-cent towards the cost of the training ever since its introduction.