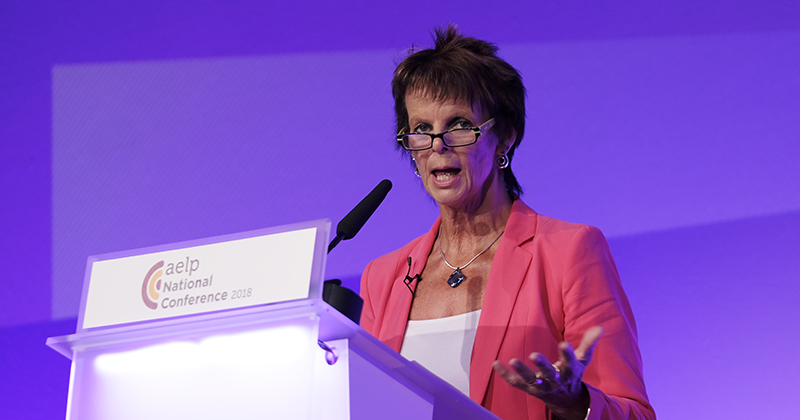 Issues with the 10-per-cent fee that small businesses must pay when they take on apprentices have been “noted”, but there will be no announcement on a rule change anytime soon, the skills minister has said.

There was a lot of anticipation over whether Anne Milton would scrap the fee altogether during her speech at the AELP national conference this morning, after she told FE Week she was “keeping an open mind” on the policy last week.

She did not rule out binning it, but told delegates she is not sure the co-investment is the real reason for the sluggish apprenticeship starts numbers.

“I’m sorry I’ve not made any big announcement but I see this conference as an important opportunity to gather your thoughts and feedback,” Ms Milton said.

Addressing the policy again in a Q&A session following her speech, she said: “What one battles with and all governments do is to demonstrate causality.

“I think that is a hard thing here. If you took away the 10-per-cent co-investment there would be less money in the pot to do apprenticeships. You get less apprentices for your money.

I’m sorry I’ve not made any big announcement

“But it is about demonstrating causality and that us the key for me. When you have a lot of other factors out there it is quite hard to demonstrate.”

“Providers take the 10-per-cent hit so there would be no impact on numbers,” he said.

“Numbers are a concern but at the moment it is from lack of demand and we need to change that.

“We will be in almost daily communication on this matter.”

Smaller employers can also access the funds generated through the levy, although they must pay 10-per-cent towards the cost of the training.

We will be in almost daily communication on this matter.”

Mark Dawe asking @AnneMilton for end to the 10% apprenticeship co-investment. But since publishing my editorial many have said they agree it shouldn’t be scrapped. https://t.co/YdLNPJcVYD #aelpnc18 pic.twitter.com/9y4Nkftp5N