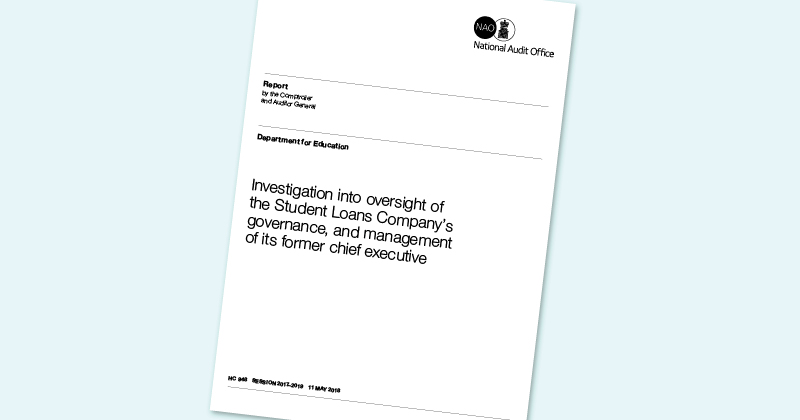 The Department for Education has been heavily criticised for its oversight of the Student Loans Company during the tenure of its disgraced former chief executive, in a new report from the National Audit Office.

The watchdog looked into how the DfE monitored the company while Steve Lamey, who was dismissed for gross misconduct last November, was in charge.

The report has identified a catalogue of monitoring shortcomings at both the DfE and the onetime Department for Business, Innovation and Skills.

“There were many changes in the company during 2016,” the report stated. These included changes to its governance and senior leadership, “but the department did not consider whether its oversight arrangements were sufficient”.

Furthermore, “accountabilities, roles and responsibilities for the department’s oversight of the company are not up-to-date and lack clarity”.

The report also revealed that the DfE is reviewing its oversight and governance arrangements with the SLC. In fact, it will cover all its arms-length bodies, including the Institute for Apprenticeships, Ofsted and the Education and Skills Funding Agency.

A spokesperson said the department had “reviewed and introduced changes to our oversight measures, including quarterly shareholder meetings to discuss performance and risk management” after it assumed responsibility for the SLC in 2016.

The current review will look at “how we can build on those measures to ensure that the SLC is well-supported” in the future, she added.

Mr Lamey was appointed chief executive of the SLC in June 2016, despite concerns from BIS about his suitability for the role, according to the NAO report.

He was suspended in July 2017, following allegations made by two whistleblowers. He was subsequently dismissed without compensation in November, to be replaced by former Education and Skills Funding Agency boss Peter Lauener.

The report identified a number of areas where the DfE and BIS had fallen short in its oversight, including failing to update the framework which set out its relationship with the SLC for almost 10 years.

“We welcome the NAO report and have already implemented a number of changes to strengthen governance in the areas they identified,” a spokesperson for the SLC said.

Meg Hillier, chair of the Commons Public Accounts committee, said the report was a “story of the failure of two departments to effectively monitor a public body under their watch”.