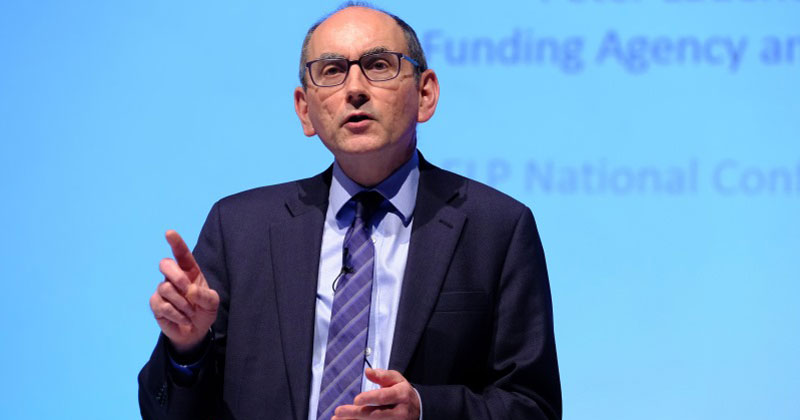 Peter Lauener will take over at the Student Loans Company later this month, after its chief executive departed suddenly under a cloud

According to a statement on the SLC’s website, the outgoing boss of the Education and Skills Funding Agency and Institute for Apprenticeships will start in an interim capacity on November 27.

He will remain in the post until a permanent replacement for Steve Lamey is recruited.

“Following investigations into allegations about aspects of his management and leadership, the SLC has decided to terminate Mr Lamey’s contract as chief executive officer,” the SLC said in a statement. “The SLC and its shareholders expect the highest standards of management and leadership and these were not upheld by Mr Lamey during his time in this role.”

It went on to explain that Mr Lauener, who had been due to retire after stepping down this autumn at the ESFA and IfA, was taking over on a temporary basis.

“DfE and the SLC board would like to put on record our thanks to David Wallace for his excellent work as acting chief executive during Mr Lamey’s suspension,” the statement went on.

“He will continue in this role until Mr Lauener starts work. After that Mr Wallace will revert as planned to his former position as SLC’s deputy chief executive and chief customer officer.”

The news comes as Mr Lauener’s tenure as boss of both the ESFA and the IfA comes to an end.

Eileen Milner, former executive director of customer and corporate services at the Care Quality Commissioner, was announced in August as the ESFA’s new chief executive.

She will take over this month, with a short period of handover with Mr Lauener before he steps down.

But there is still no word on who will replace Mr Lauener at the IfA.

FE Week reported last month that the search was still ongoing, six months after it began.

We previously revealed in July that Mr Lamey had been suspended, pending further investigations.