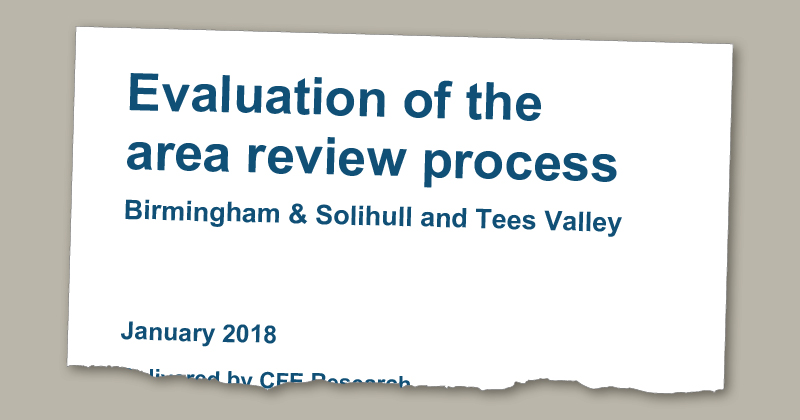 The way the government handled the first wave of the area reviews has been slammed by new research on behalf of the Department for Education.

Most of those who took part “considered their involvement in the first wave of the process as a challenge”, consultancy firm CFE found.

Major obstacles included a “lack of lead in time to understand the policy” or prepare for it, and “underdevelopment of the guidance”.

There was initially too narrow a scope of providers, especially because school sixth-forms weren’t included, and there was too much focus on finance above all else.

“Many interviewees said it was unfortunate and sometimes frustrating that the needs of learners and local businesses were not considered in the same level of detail as financial issues,” the report said.

The area reviews of post-16 education and training were announced by the former Department for Business, Innovation and Skills in July 2015, and kicked off in September that year, concluding in March 2017.

The process was intended to lead to “fewer, often larger, more resilient and efficient providers”.

Early predictions claimed up to 80 mergers would result, just 58 were proposed – of which 35 have gone through, according to the FE commissioner Richard Atkins, who oversaw the final reviews.

He told the Commons education committee this week the reviews weren’t an “unmitigated success”, but claimed that “on balance they had a number of successful elements”.

These included “bringing colleges, local authorities and local enterprise partnerships together”. He also highlighted the benefits of “holding colleges to account in terms of looking at their data and sharing their data”.

The research focused on the experiences of people involved in two of the first-wave reviews: Birmingham and Solihull, and Tees Valley, which were the first two to finish in March and May 2016 respectively.

Many of the difficulties cited have been reported extensively by FE Week.

We covered the long delays to the early reviews, and the initial timeframe of three to four months that even the government representatives involved in the process acknowledged had been optimistic.

Participants in the Tees Valley review, which was jointly chaired by Sir David Collins, the FE commissioner at the time, and Gill Alexander, Hartlepool council’s chief executive, complained that “the two individuals had different ambitions for the review”.

This echoed deep divisions in the Greater Manchester area review – not included in this report – between the colleges and combined local authority, leading to lengthy delays.

The research sheds some light on why so many recommended mergers, including all three of those proposed in Tees Valley, have subsequently fallen through.

“The extent to which the options were appraised in both areas was relatively light touch, with the emphasis being on pragmatic partnerships between colleges to merge rather than a detailed analysis of the data to suggest which merger options would be best based on the evidence base,” the report said.

However, it didn’t look at the outcomes and impacts of the reviews as “at the time the evaluation took place it was too soon to measure these”.

But the report did note that “only a few respondents agreed that the changes recommended would have happened without the area review process being undertaken”.