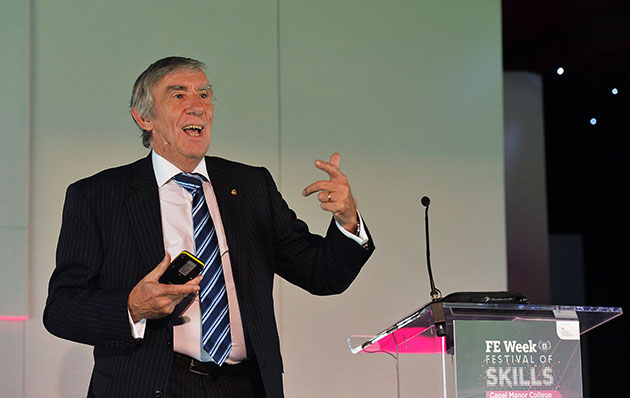 The number of FE colleges could drop by a third once the post-16 area review process has completed, the FE Commissioner Sir David Collins has said.

Sir David’s “best bet” for the size of the sector was based on his estimate of up to 80 mergers, he told delegates at the Area Review Summit at FE Week’s Festival of Skills today.

The FE Commissioner, who has been leading the review process, also revealed that all the areas in wave one and many in wave two had reached the recommendation stage.

“In general terms, what’s emerging is certainly quite a number of mergers,” he said.

In terms of numbers, he said: “I would start somewhere in the regions of 50 mergers upwards, possibly 70 or 80, on the basis of what’s happening at the moment.”

When pressed later to put a figure on the size of the sector once the reviews had completed, he said: “We’re at 243 colleges now. My best bet is that we’ll come down to 170.”

The government first unveiled plans for the area reviews in July 2015, with the first areas announced in September.

Wave one had taken “a bit longer than we would have hoped” in part because it had included “the most complicated cases – the ones where it was clear there was going to be a bit of an issue”.

The FE Commissioner reported on the outcomes from “half a dozen or so” of the reviews that have so far completed, including Birmingham and Solihull, Tees Valley, and Sussex.

These were intended to “give reassurance that we’re talking about locally driven not top-down demanded” outcomes, Sir David said.

To illustrate this he gave a number of examples of outcomes that were different from what he would have liked to see – such as in Tees Valley.

He said he would have liked all four colleges involved to have come together “for a Tees Valley total solution” rather than the two separate mergers involving two colleges each that were proposed.

“That’s a really good example of the fact that the government or the FE Commissioner is not pushing a particular solution,” he said.

“What we’re trying to get is a picture that actually works and fits.”

Sir David confirmed that the long-delayed Manchester review had definitely completed, although its recommendations were not included in his presentation.

As previously reported by FE Week, the Manchester review had been subject to deep tensions between the Greater Manchester Combined Authority and the colleges involved, with the Skills Minister Nick Boles recently echoing calls from the review chair, Theresa Grant, for the colleges to be more ambitious.

The FE Commissioner acknowledged the delay, and said that it was because combined authority was “very ambitious” and “they saw this as a real opportunity to make sure that the skills coming out of the colleges were linked to the Manchester priorities”.

But he added: “Clearly the combined authority had to adjust a little bit to what was and wasn’t on the table.”

The solutions that had finally emerged from the review “are very good solutions”, Sir David said, “although longer term there may be more that’s happening”.