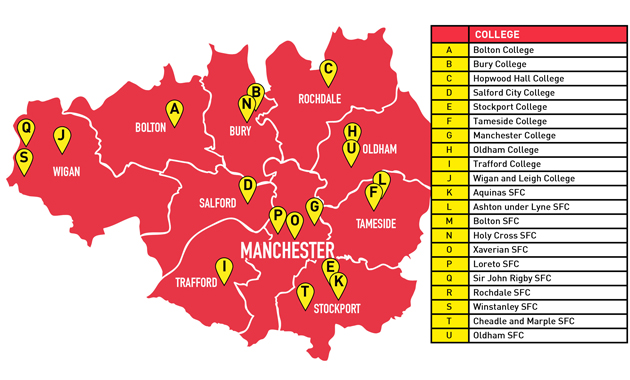 Deep divisions have been exposed between the colleges and the combined local authority involved with the Greater Manchester area review, according to leaked documents.

The Greater Manchester Combined Authority (GMCA) has spoken of its dissatisfaction with the proposals made by the 10 general FE and 11 sixth form colleges at the review’s fifth steering group meeting on May 25 in a statement seen by FE Week.

In all, just two mergers were proposed, involving five colleges.

The GMCA said it “remains to be convinced” that the proposed outcomes will “deliver the integrated learning infrastructure that is needed, taking Greater Manchester as a whole rather than focusing institution by institution”.

It also wants to ask the Secretary of State to award it the “power to make further changes to these proposals, should it become clear that the current options cannot deliver a Greater Manchester-wide learning infrastructure that meets needs”.

A confidential document outlining all the proposals – also seen by FE Week – reveals that the authority has proposed three of its own outcomes, one of which is “an effective working relationship between the combined authority and colleges”.

GMCA was given control over the region’s skills in the first of the government’s devolution deals in November 2014.

A BIS spokesperson also confirmed on Wednesday (June 8) that it had installed a local authority — Theresa Grant (pictured), chief executive of Trafford Council — as chair of the Greater Manchester area, at the request of the GMCA. Area reviews are usually chaired by the FE Commissioner, Sir David Collins, or the SFC Commissioner, Peter Mucklow – and it is understood this imposition of someone from outside the sector has been a source of tension from the start of the process in Manchester, which is now in its ninth month.

According to minutes from the December 10 meeting of Bolton SFC’s board – seen by FE Week on June 3, but subsequently removed from the internet – its principal Steve Wetton was accused, along with its chair, of “not engaging” in the process in a meeting involving Bolton College and senior leaders from an unnamed council.

The minutes said: “The principal believes we are very actively engaging, just not saying what the council and Bolton College would prefer to hear.”

Meanwhile, minutes from a meeting held in December by Ashton-under-Lyne SFC’s board indicate further resistance to mergers.

They said: “Colleges had been asked to come up with suggestions, but to date there had been no suggestions as all colleges had determined they were viable as stand-alone institutions.”

The minutes also note “tensions between devolution and the area review priorities and scope”.

Minutes from a December Salford City College board meeting also indicate that a number of colleges have written to Ms Grant to outline their concerns with the process.

One of the proposed mergers involves Tameside, Stockport and Oldham colleges, and the second will see Bolton College and Bury College merge with the University of Bolton.

A spokesperson for GMCA said it had nothing further to add to its statement.

A spokesperson for Trafford Council said it would not be commenting until after the review had completed.

Anton McGrath, Ashton-under-Lyne SFC principal, said he was happy with the outcome of the process and the recommendations of the final steering group meeting.

Bolton SFC and Salford City College were unable to comment ahead of publication.