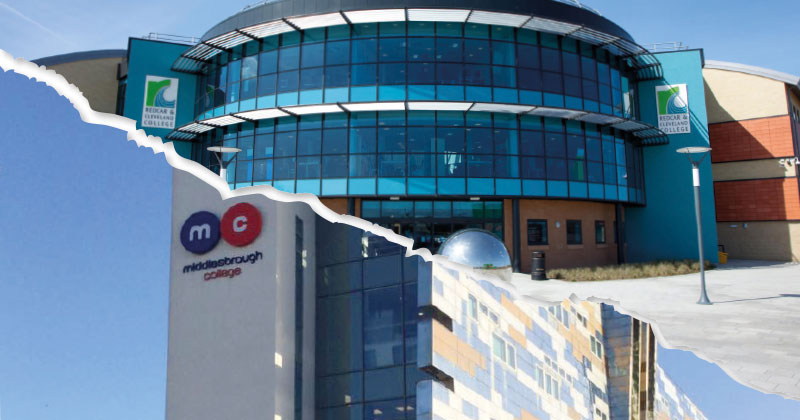 All three mergers proposed by the Tees Valley area review have now fallen through.

News of the breakdown in talks between Middlesbrough College and Redcar and Cleveland College came in a newly published FE commissioner report.

This failure means that of the 39 firm recommendations for mergers made in the first three waves of the area reviews, 14 have so far either fallen through or changed significantly.

Two weeks ago, FE Week reported that the link-up between Darlington College and Stockton Riverside College had been called off, while a partnership between Hartlepool Sixth Form College and Hartlepool College has also fallen by the wayside.

Richard Atkins’ visit to Redcar and Cleveland College in March was prompted by the “breakdown in February 2017 of merger discussions between the two colleges”.

The college, which was given a grade three by Ofsted in October 2015 and has a notice of concern for financial health from the Education and Skills Funding Agency dating from March 2015, was only taken out of its previous intervention in October 2016 on the condition that the merger went through.

The report, published in early July, noted: “The breakdown in preparations for merger with Middlesbrough College reflect in part, the challenges faced by both parties in securing a thriving FE presence in Redcar, whilst addressing the risks posed by the challenging financial position as well as ongoing work required to improve quality.”

He recommended the college undergo a structure and prospects appraisal to “identify and confirm a sustainable solution” – which could include reopening discussions with Middlesbrough.

But Zoe Lewis, Middlesbrough’s principal, told FE Week that the college, which is also rated grade three, had “declined the offer to participate” in the SPA, although she had given the FE commissioner and the ESFA “a copy of our earlier proposal, should they wish to consider it”.

She said the proposal, prepared jointly by both colleges in February, “reiterated Middlesbrough College’s commitment to stabilise Redcar College’s financial position, to raise student numbers over the longer term and improve the quality outcomes for students studying there”.

“The Redcar and Cleveland College board declined this proposal at that time, pending a review of other options available,” she said.

Ed Heatley, Redcar and Cleveland College’s principal, confirmed that merger talks with Middlesbrough College “are no longer in process”.

“Redcar is currently in talks with a number of other potential merger partners, who have visited the college and will be presenting proposals in the coming weeks,” he said.

Mark White, Stockton Riverside’s chair of governors, and Pat Howarth, the Darlington chair, said in a joint statement that their decision not to merge, which was announced in late June, had been taken after “careful consideration and detailed discussions”.

And Hartlepool SFC rejected a merger with neighbouring Hartlepool College, and now plans to join forces with Sunderland College.

No one has revealed the reason for this change of plan, despite repeated enquiries by FE Week.

Reports into the fourth and fifth waves of the reviews, which completed earlier this year, have yet to be published.