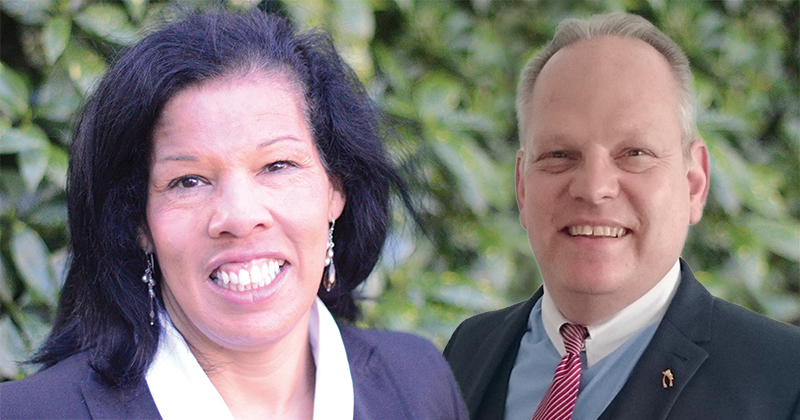 The leader of a troubled college has stepped down just 18 months into the job – and will be replaced by the ex-principal of another formerly struggling institution.

Derek Headrige [pictured right] was appointed campus principal at Totton College in April 2016 following a period of turmoil that saw it merge with the social justice charity Nacro.

But he has now resigned and is being replaced on an interim basis by the former principal of LeSoCo, Maxine Room [pictured left], the college announced today.

Ms Room led Lewisham College, and then LeSoCo – the short-lived name for the merged Lewisham and Southwark colleges – for five years until May 2014, when she stood down after the college’s leadership was heavily criticised in an FE commissioner report.

Lisa Capper, director of education at Nacro, said she was “delighted to welcome Maxine to the team”.

She praised the work Mr Headrige has done since her took over, and said Totton College “has improved its Ofsted rating and results and has introduced a number of high-quality technical courses and apprenticeships to match the needs of the local community and industry demands”.

A spokesperson insisted the resignation was not connected to the college’s recent Ofsted inspection, in which it improved by just one grade to ‘requires improvement’ in July, and said he was leaving to take a “promotion to a new role within the education and training sector”.

The college joined Nacro in the wake of an ‘inadequate’ across-the-board Ofsted rating in April 2015, amid concerns over its financial situation.

The charity uses skills and training to reduce crime and reoffending in English and Welsh communities.

That merger went ahead in December 2015, and was followed by a period of turmoil as the college consulted on a restructuring plan that threatened jobs.

It was during this time that Mr Headrige, the former group academy dean at BMW, took over as campus principal.

A return visit by the education watchdog in June resulted in the college receiving a grade three across the board.

“Since the transfer of ownership to Nacro in December 2015, the pace of change has been slow,” noted the inspection report.

Ms Room was in charge of Lewisham College from 2009, and oversaw its merger with Southwark College in 2012.

But when the new body was inspected in November 2013, it was branded ‘inadequate’ – a verdict that occasioned a visit by the FE commissioner Sir David Collins in January 2014.

His report noted that a lack of action to address the weaknesses identified by Ofsted “leaves serious doubts about the capability of the leadership team”, and that there was a “lack of confidence” in the leadership team among key stakeholders.

Despite a recommendation that the college board “develop and implement a succession plan for the post of principal”, it wasn’t until May that Ms Room announced she was stepping down.

According to her LinkedIn profile, Ms Room has been working in a variety of consultancy roles since leaving Lewisham Southwark.

She will be supported in her new role by Hannah Avoth, who is being promoted to vice-principal.

“This is a strong set of appointments and I know they will take the college to the next stage of its successful development,” Ms Capper said.