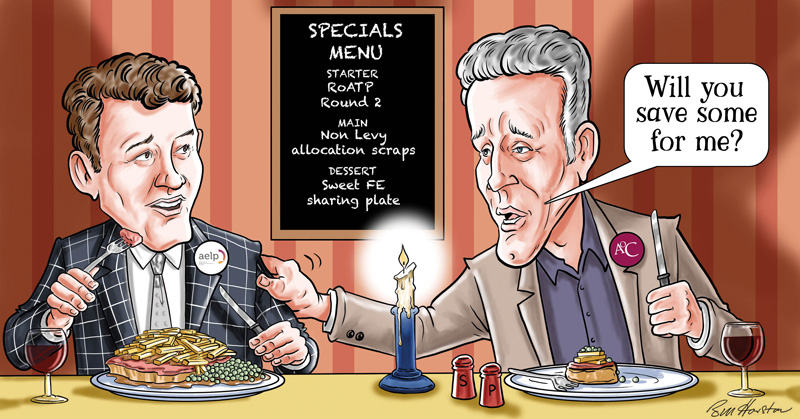 Non-levy allocations will no longer be ruled out for the dozens of colleges that weren’t listed on the new register of apprenticeship training providers at the first attempt following political pressure, FE Week has learned.

However, there should be no behind-closed doors special treatment offered to colleges that would work against the private sector, the AELP boss Mark Dawe has warned.

Apprenticeships and skills minister Robert Halfon revealed, during parliamentary education questions, that providers who did not make it onto RoATP would be able to reapply from today – with it subsequently emerging applications need to be in by April 7.

This prompted FE Week to ask DfE if providers who didn’t get on RoATP first time round, had missed their chance to get an SFA allocation for non-levied employers.

The DfE has now indicated a softening of its previous position, with a spokesperson responding today that it’s something the department “will decide on once the new system becomes established”.

It comes as news of the results of up to £440 million of non-levy allocations (funding for apprentices with employers who do not pay the levy) for those that are on RoATP continues to be delayed.

The results of the tendering process should have been published on March 14, according to the Skills Funding Agency’s own timetable. FE Week reported on the delay to the allocations on that date – after it was confirmed on the government’s Bravo e-tendering portal.

The DfE’s director of apprenticeships David Hill then tried to reassure delegates at FE Week’s Annual Apprenticeships Conference in Birmingham, that the delayed results were “imminent” but not “civil-service imminent”.

FE Week understands the Association of Colleges has been lobbying the SFA to find additional non-levy allocation funding – on top of the £440 million – for those colleges that will get on the RoATP at the second time of trying.

Otherwise, the AoC has suggested holding back some of the £440 million for providers successful in the second round as a “contingency”.

David Hughes, AoC chief executive, said: “Ideally SFA would have had time to get the register right and then to confirm tender decisions for small company training.

“However, they had to run the two processes at the same time so AoC has suggested that they process the latest register applications quickly while making sure there is funding available for the highly quality training that the excluded colleges offer.”

His counterpart at AELP, Mr Dawe, insisted that it would be wrong if any special dispensation were given to colleges that missed out on RoATP first time round.

He said: “If there is a private deal done with the colleges that didn’t get on the register first time that is unacceptable. Every provider type needs to be treated fairly. The same approach should be applied to everyone.”

FE Week also asked the DfE what date providers would be able to start apprenticeships from, if they are successful in the RoATP re-application process.

While the DfE spokesperson said he had been unable to pin down a precise date for this, he added “those who are successful in the RoATP process when it reopens, can start in May”.

The questions reflected anxiety among the sector, with Chris Hayden, employer engagement manager for apprenticeship and workforce development in life sciences with South and City College, tweeting: “Great to see applications available again, but, will we have decision before May? Our clients want to know!!”

The new April 7 deadline for the new round of RoATP applications, means the new window is less than three weeks.

This is shorter than that for the first round of applications that opened on October 24 and closed on November 25.

The SFA warned on November 25, just hours before the register deadline, that some providers were failing to follow instructions and were applying via more than one route.

As then reported by FE Week, the Skills Funding Agency published the new RoATP last Tuesday.