The Northern Powerhouse Partnership has today published a major report on how the region can close the education and skills attainment gap with the south.

Chaired by former chancellor George Osborne, the organisation has a number of recommendations for improving FE.

FE Week has pulled out the eight main findings.

1. “Bureaucracy” is to blame for the apprenticeship levy’s slow start

The “slow and over bureaucratic” process of approving apprenticeship standards at the Institute for Apprenticeships is to blame for the levy’s poor take-up.

Mr Osborne, who first introduced the levy, admitted disappointment with recent apprenticeship starts numbers, and believes funds are “not being fully utilised”.

Government data released last week revealed there were 114,400 starts in the first quarter of 2017, covering the months of August, September and October, a fall of 26.5 per cent on the same period for the previous year.

“This is disappointing given that the majority of starts take place in the first quarter of the academic year and suggests that apprenticeship levy funds are not being fully utilised,” the report said.

The NPP claimed there is “extensive evidence” to suggest this poor uptake is due to the “slow and overly bureaucratic” process of approving apprenticeship standards.

FE Week has reported extensively on how employer groups have complained about the “inordinately long time” it has taken to develop the new standards, some of which were first published over two years ago but are still unready for delivery.

To turn the poor apprenticeship numbers around, the NPP wants more investment in people currently “unable to access” apprenticeships and higher-level skills.

These groups should be “prioritised” when allocating any current and medium-term underspends in the levy until its take-up increases.

“There is a significant need to help people who have missed out on access to the right skills when leaving school to move on from low-paid jobs – apprenticeships with their existing employer can be a viable route,” the NPP said. 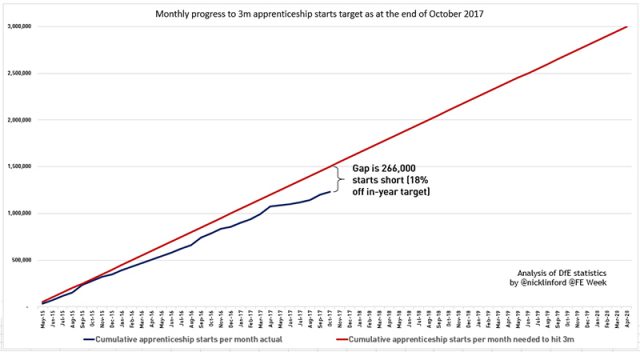 All FE providers, alongside schools and universities, should be measured for the “employability and eventual success” of their learners at age 25 compared to their previous attainment.

This would “shift the focus” to long-term achievement “rather than short-term measures of success”.

As recently reported by FE Week, colleges are frustrated by the government’s current and ‘misleading’ progress measures.

The report describes the government’s new technical qualifications as a “great opportunity” despite difficulties in “identifying high-quality placements for those studying towards them”.

The DfE has said that all T-level students will have to take part in these work placements, which should last between 45 and 60 days and last a minimum of 315 hours, a feat described as “impossible” by the Association of Colleges.

The NPP said employers, which may have offered some type of work experience in the past, should be “encouraged to prioritise this group to gain the benefit for both parties from applied learning, although more flexible approaches than a three-month placement may need to be considered to maximise the quality of opportunities available”. 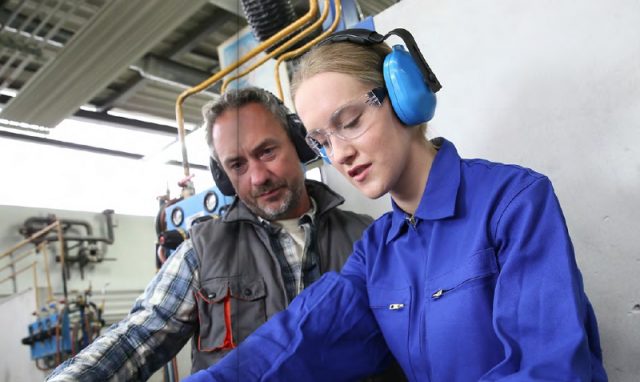 It is recommended that metro mayors and areas receiving further devolution deals should control the adult education budget, as well as overall vocational education spending from 16 to 18.

This, a spokesperson told FE Week, would mean “close collaboration and co-decision making” with the government on things like new Institutes of Technologies and the technical pathways associated with the Sainsbury Review.

6. Make the north the “world-leading centre” for degree apprenticeships

The NPP wants to establish the north as the “world’s leading centre” for degree and higher-level apprenticeships, seeing up to one in five of its learners pursuing them in the future.

“This would allow our brightest and best students to pursue a mix of work and applied learning, with new Institutes of Technology established to focus on the Northern Powerhouse leading the fourth industrial revolution,” the report says.

7. Every northern business to become mentors for skills

The report asks employers of all sizes across the north to pledge to “mentor or provide high-quality experience of the workplace” to at least the same number of young people as they have employees.

This will include sole traders and SMEs with only a handful of staff to global brands such as Barclays, which would “expect to work with a number of young people far in excess of the 12,000 staff they employ in the north”.

The NPP said this new scheme will go “some way” in addressing the north’s issue of upskilling.

“Given the importance of the digital sector to the economy of the north, we must ensure that this funding is deployed effectively,” it said.