A third of FE and school staff felt “undue pressure” on their professional judgment when issuing exam grades in 2020, according to an Ofqual survey.

The exams regulator has published a report on a survey and interviews conducted with FE and school staff after the grading process in 2020, which it said were used to inform guidance on teacher assessment in 2021.

The views were gathered before the government’s decision to abandon its standardisation process and issue centre-assessed grades (CAGs) instead.

In total, 1,234 people responded to the survey, and 54 teaching staff were interviewed in further detail.

1. One in three staff felt ‘undue pressure’, with some blaming leaders

External pressure on teachers to issue certain grades has been flagged as a concern by leaders this year.

In Ofqual’s survey, 31 per cent of 762 respondents said they felt “undue pressure” on their “professional judgment” when issuing grades in 2020.

Of the 29 per cent that gave more detail, half referred to the pressure they felt to meet the centre’s grade distributions from previous years.

The system is different this year, but teachers have still been asked to consider results between 2017 and 2019 when making their judgments.

Some mentioned individual cases where pressure had been applied to increase grades for specific students by leaders, and Ofqual said the “threat” of senior management lowering grades provided by staff “was strongly felt and not popular”.

But 65 per cent said they felt effective steps were taken to protect staff against “external influences”.

This year, Ofqual has told heads to keep records of parental pressure over exam grades. 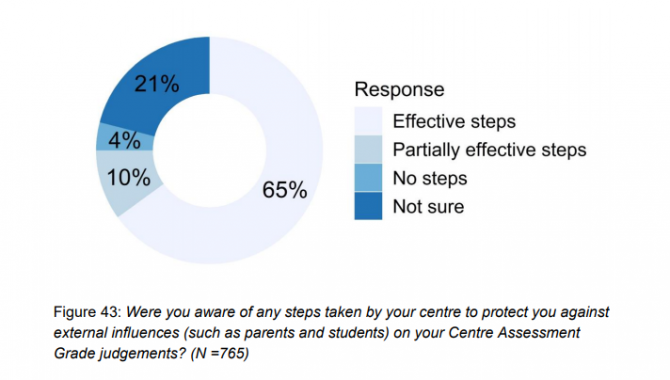 This year, teachers have been asked to consider a range of evidence, including mock results, coursework and performance in optional externally-set assessment tasks when determining their grades.

Ofqual’s survey asked respondents rate the weighting given to different types of evidence used in reaching grades in 2020 on a scale of 0 to 100.

For GCSE and A-level grades, mock exams were seen as the most important, with a mean rating of 81.8.

Evidence on students’ attitudes and attendance was also used, but to a lesser extent. 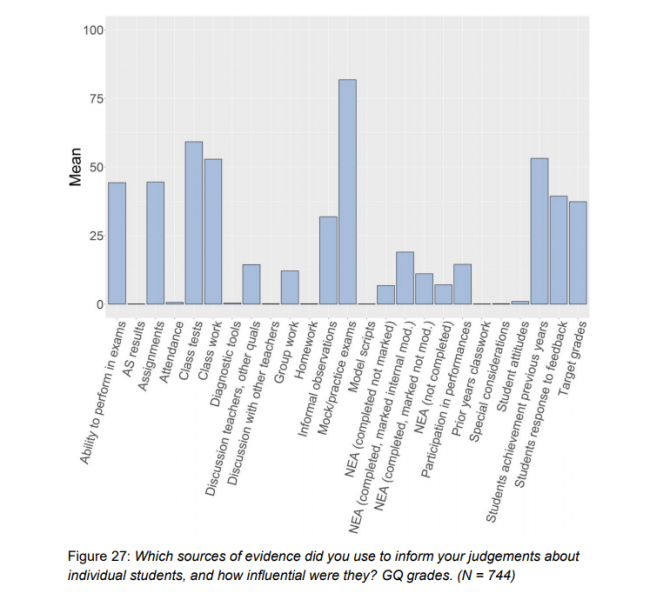 3. Teachers tended to give a ‘good day’ grade

Last year, colleges and schools were asked to issue grades based on how a student would have performed in an exam taken in the summer.

This year students will be assessed only on what they have be taught so far.

In the interviews conducted by Ofqual last year, a “very common opinion” was that students were much more likely to under-perform in an exam than over-perform.

Cath Jadhav, Ofqual’s director of standards and comparability, said in a blog today that increases in 2020 results were “not because teachers were more generous” in their judgments about the standard required for a grade.

Instead, she said it was because they “could not know which of their students might have had a bad day in the exams and therefore they assumed all students would get the grade they might get on a good day”.

Staff were asked to rate on a scale of 0 to 100 their overall confidence in their judgments for their classes.

The overall mean confidence was 85.5, with a median value of 90.

Asked about the final grades submitted to exam boards, this dropped to 78.9 mean and 88 median.

However, respondents with more seniority in their college or school had greater confidence in final grades.

For example, heads of centres had a mean confidence of 84.5, whereas teachers had a rating of 74.

5.  …but some staff had difficulty getting evidence

Nearly 120 out of 798 (15 per cent) said they had difficulty accessing information or evidence about students they wanted to use to support CAGs.

Ofqual did not follow this up in detail, but said it was “probably related to centres being closed”, leading to logistical difficulties in accessing materials.

The paper reviewed studies from abroad and of SATs in England.

It found there was a “slight bias” in favour of girls, but evidence in relation to ethnicity was “mixed”.

A technical report published by Ofqual last autumn found “no evidence” that the system for awarding GCSEs and A-levels in 2020 systematically disadvantaged poorer students or those with protected characteristics.

However, the regulator said today its literature review findings showed it was “so important” that arrangements are in place to mitigate the risk of bias this year.