Just 112 providers applied for the Education and Skills Funding Agency’s second Covid-19 supplier relief scheme – and 35 of those were colleges.

The majority of bids – 70 – were to claim apprenticeship support only, while 14 applications went in just for adult education budget (AEB) relief.

A total of 28 submissions were for both types of funding.

The ESFA’s second round of supplier relief opened last month and allowed FE providers to bid for apprenticeship and adult education budget funding in advance of delivery for the period July to October 2020.

The first of the schemes, which are being run to support providers suffering from reduced learner and apprenticeship numbers caused by the pandemic, covered the period from April to June. It resulted in 165 applications, a third (58) of which were rejected.

Karen Woodward, the ESFA’s deputy director for employer relations, told a previous FE Week webinar that many providers failed in their first round bids because they struggled to “prove need” for the financial support and not many eligible providers applied because they did not feel “comfortable” in sharing the financial information that was being requested by the agency.

Of the 112 bids in the second round, 77 came from independent training providers while 35 came from colleges. 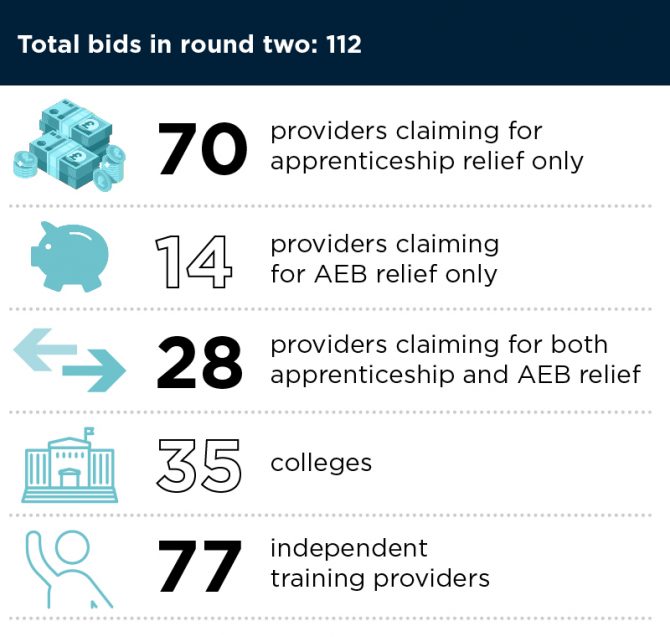 In June, Association of Colleges boss David Hughes told MPs on the education select committee that college sector income, which currently totals around £7 billion annually, could fall by £2 billion next year as the “enormous impact” of Covid-19 bites.

A day after Hughes’ appearance FE Week revealed that Bradford College was to make over 100 staff redundant after their apprenticeship Covid provider relief application was rejected. The college’s principal, Chris Webb, branded the government as “short-sighted” following the rejection.

While non-levy apprenticeships have been eligible for the ESFA’s relief scheme, any apprenticeships funded through the government’s digital system – mostly with levy-paying employers – are not.

The agency claimed this was because the contract is directly with the employer and provider rather than government. The Association of Employment and Learning Providers challenged this legally but dropped the action in June after weighing up the costs.

The ESFA announced last week that it was due to begin notifying bidders of their outcome for the second supplier relief round from July 22. The agency expects to release all outcomes by August 6.