Headteachers at schools across England will again be reminded by ministers of their legal duty to promote apprenticeships, as a leading MP accuses them of “not doing enough”.

Education secretary Gavin Williamson told FE Week that warning letters will be sent by the minister for the FE market, Lord Agnew, tomorrow (full letter below).

He said they’ve been drafted as the government “wants to make sure every young person is aware of just how rewarding doing an apprenticeship can be – no matter what their skills, interests and aspirations”.

And education select committee chair Robert Halfon told an FE Week reception at Parliament yesterday that “time and time again we know schools, for one reason or another, are not doing enough to promote apprenticeships”.

“If we’re going to change the views of parents, and if we’re going to have more young people thinking an apprenticeship is the right thing to do, we need to have people going into schools,” he added. 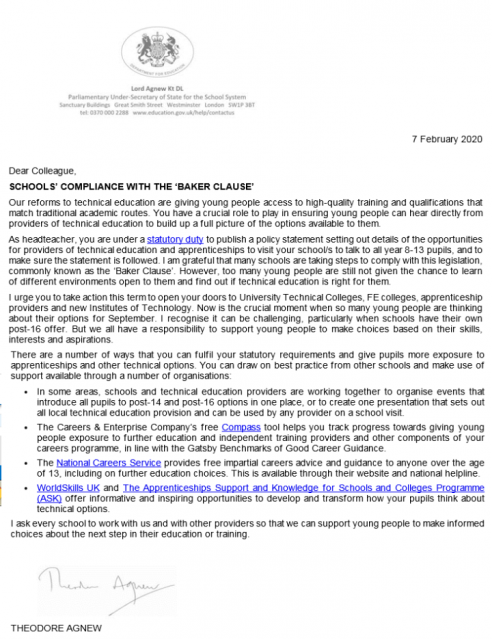 Under the so-called Baker clause, all local authority-maintained schools and academies have since January 2, 2018 been legally obliged to give education and training providers the opportunity to talk to pupils in years 8 to 13 about technical qualifications and apprenticeships.

They must publish a policy statement online to this effect, as well as details about the careers programmes they offer, how the success of these programmes are measured and when the published information will be reviewed.

The clause became law after the government adopted an amendment to the 2017 Technical and Further Education Act, proposed by former education secretary Lord Baker, who claimed schools were “resisting” those who tried to promote more vocational courses to pupils.

A YouGov survey released last week and commissioned by the training provider JTL, found that 11 per cent of 15- to 18-year-olds were being encouraged to take up an apprenticeship.

Department for Education has so far shied away from intervening where schools are not complying with the Baker Clause.

Last year the DfE admitted no action was taken against schools between January 2, 2018 and January 2, 2019 in response to a previous freedom of information request from FE Week.

This is despite a report by the Institute for Public Policy Research, published around that time, that found two-thirds of schools were flouting the clause.

The government’s lack of action has led the Baker-Dearing Trust to label their own founder’s clause a “law without teeth,” adding there was not much point in passing the law if the government did not “follow it up”.

But, they added, getting the government’s weight behind the law was the “best we can hope for”.