Sally Dicketts, who steps down as chief executive of Activate Learning this month, talks to Jess Staufenberg about getting staff development right – and where she found her two life-changing coaches

I clearly remember first meeting Sally Dicketts. It was last year at the Association of Colleges’ conference, where, as president since 2020, she was overseeing one of the first big face-to-face events in many months.

She had on a brilliant red dress, and as I ushered her towards a tiny room for The FE Week Podcast, she noticed great spots of what looked like black bike oil along the hem. “What is that?” she admonished them for a moment. Then she brushed the matter aside, sat down in front of the mic, and gave a fascinating interview. No nonsense, no fuss, straight to the point.

Dicketts’ aura of authority – you can completely see why she was voted AoC’s president – must come from 18 years of being the chief executive of Activate Learning, an Ofsted grade 2 college group with seven colleges across Oxfordshire, Berkshire and Surrey.

Dicketts is stepping down at the end of this month, but in her first interview with this paper back in 2014, she said she thought she might have been passed over for roles earlier in her career because of a lack of “gravitas”, being naturally very “chatty” and without an Oxbridge education. Nowadays, she exudes authority, without throwing it about.

It’s clear Dicketts has put tremendous effort into developing herself, and her staff in turn, during the past couple of decades – from a girl in Cardiff with dyslexia whose potential was often overlooked, to becoming principal at Milton Keynes College by 1996 and then chief executive at Activate Learning in 2003. Coaching has been instrumental, she says.

She found two long-term coaches – Paula and Nick – herself. Paula she met over a decade ago on a training course run by LSIS, the forerunner to the ESFA.

“They were piloting this very innovative programme and both Shelagh Legrave [now the FE Commissioner] and I were on it. It was unusual because you were there for a day and a night, and one of the tasks was you literally had to talk for 30 minutes about what you were trying to achieve in your organisation,” recalls Dicketts.

“They gave you a coach, and mine was Paula, and she just picked apart all my barriers, very delicately and very impactfully. And I just thought, ‘You’re brilliant’.”

Since then, Paula has coached and supported Dicketts with operations and organisational matters. Meanwhile, her other coach, Nick, has helped her focus on strategy and culture. She found him on a training course at St George’s House in the grounds of Windsor Castle. “He was the facilitator, and he was phenomenal. At the end I asked if he would coach me.”

It must have made an extraordinary difference to have two professional people, external to the college context, to freely bounce ideas and problems with. Dicketts’ determination to keep improving herself seems the opposite of complacent, overconfident leadership.

It’s such a priority that she made sure all her senior leaders also got an external coach, paid for by the college group. She additionally appointed a director of coaching who trains middle management staff to coach one another, and in 2020, following the global Black Lives Matter protests, “dual coaching” was introduced.

“I worked with our ethnic minority staff to look at what was happening in our institutions and was horrified at some of the behaviours and a lack of sense of belonging,” she notes. “So those staff who are aspirational are mentored by a senior manager – but the senior manager is also mentored by the member of staff, on what it’s like being in an ethnic minority in our institutions.”

It seems to be working: there has been a 40 per cent increase in staff with black, Asian and ethnic minority backgrounds applying for and getting faculty manager roles, compared to before the coaching initiative was introduced.

But for Dicketts, her leadership has been about demonstrating that while staff will always be developed, the individual is expected to put in hard work for themselves too. On this, she wanted to set an example.

“For me, if you are a learning organisation, the most senior person should be the best learner,” she explains. “I’m always learning, and I’m still reading.” Right now Dicketts is reading Atlas of the Heart by Brené Brown, a former US social worker turned researcher who discusses vulnerability and shame, or a lack of sense of self-worth, and leadership.

For me, the most senior person in an organisation should be the best learner

Dicketts has wanted to boost her staff’s sense of self-worth but has also expected them to take opportunities. It’s the same for students, whom she regularly reminds that “cleverness is like a muscle – it increases the more you use it”.

“Some people might say, ‘Sally Dicketts didn’t give me what I wanted’ – I’ve given you learning opportunities, but I won’t take you there, you need to meet me halfway,” she says frankly.

“For instance, do I want staff to do all the heavy lifting for students? Absolutely not. And that’s the same in how I lead.” Dicketts has hoped to lead by example, always developing herself and taking opportunities, and giving staff opportunities for development for them to take too.

One of the greatest challenges of leadership has been what to do when someone is not developing themselves as expected, she continues.

“That’s difficult, when you’re going into an organisation and you’re meeting students who aren’t getting the great deal you thought they were, and for many of them, this is their last opportunity, and they will suffer. We talk about our learning philosophy, and there’s a buzz around that. But if there’s a teacher who doesn’t understand that, and we’ve not enabled that enough, that’s hard.”

Dicketts is admirably frank about her own mistakes as a leader in some of those situations. “Normally the place where you might get it wrong is around people, where instead of challenging them to develop themselves further, you’ve actually made them feel worse about themselves, and that’s not great. Then it’s about trying to resolve that.”

This is why the best and most important continuous professional development for leaders focuses not on the ‘what’ of leadership, but on the ‘how’, she says.

“CPD for leaders has improved, but it can tend to be on the ‘what’, so that leaders must know about balance sheets, cash flows, marketing, which I wouldn’t disagree with, but actually it’s, ‘what are the biggest barriers to the individual succeeding?’ And that’s behaviours. It’s about looking at your behaviour as a leader.”

On this, Dicketts has all the self-insight of someone who has been coached effectively for at least a decade. “So for example, I can do things badly, I can be distracted, I can probably have a grumpy day. If that’s pointed out to me, I will apologise. You have to do a lot of work to see your strengths and weaknesses.”

It’s perhaps unsurprising then, that neuroscience is one of the five “drivers” for the 2021 to 2025 strategic plan that Dicketts is leaving Activate Learning with when she steps down. Understanding the science behind teaching and learning must be a key pillar in the group’s decisions.

The other four are: globalisation (the need to have strong global relationships, as particularly exemplified through Covid, Brexit and the Russian invasion of Ukraine); technology (its importance but also the impact of device use); sustainability (of the organisation and the planet); and wellbeing (particularly since the stress caused by the pandemic).

Dicketts also leaves Activate Learning the legacy of a new structure, through its academy trust (which opened in 2013 and now has four UTCs and two secondary schools) and a reworked college staffing structure – both moves designed to break down barriers between institutions and to create opportunities for development. It’s particularly her move around her senior leadership structure that pricks up my ears.

“We have a very unusual leadership structure, in that we don’t have college principals,” says Dicketts. In 2015, she replaced the principals of each college with cross-college faculty and executive directors instead, because she was finding that “principals were loyal to their college, not to Activate Learning”.

The faculty directors are responsible for six programme areas across all colleges: technology, lifestyle, creative industries, land-based, life skills; and then A-levels, professional, business and other studies as the final programme area.

We have a very unusual leadership structure

There are also three director roles: a director of pathways, who looks outwards to where learners are headed; a design director, to design the programmes; and a delivery director. “All three have to work very closely together.”

The move has largely worked, says Dicketts, although design directors needed time and training to grasp the role, and she thinks the delivery director role needs tweaking. It’s work for the person who will replace her: Gary Headland, joining after seven years as chief executive at Lincoln College Group.

As a leader, Dicketts has clearly been fascinated by how people develop and learn, driving through new roles, new challenges and free coaches during her tenure as an authoritative, motivated person.

Now, she’s headed for a well-earned break, not planning on becoming an interim college principal, and remaining in post as AoC president. All in all, as she bows out, she’s happy. “The team universally embrace learning, feedback and coaching. There’s a real learning culture.” 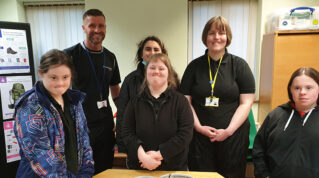 A multi-award winning college on the remote border with Wales has flung its doors open to the public in every possible...