The regional winners of the inaugural Annual Apprenticeship Awards have been announced at a special ceremony in the House of Commons today.

The categories included ‘apprentice employer’, ‘apprenticeship provider’ and ‘promoting apprenticeships campaign’, and winners will now head to the national finals on March 22.

The event was sponsored by the chair of the education select committee Robert Halfon, who is also celebrating the start of National Apprenticeship Week. The winners were as follows: 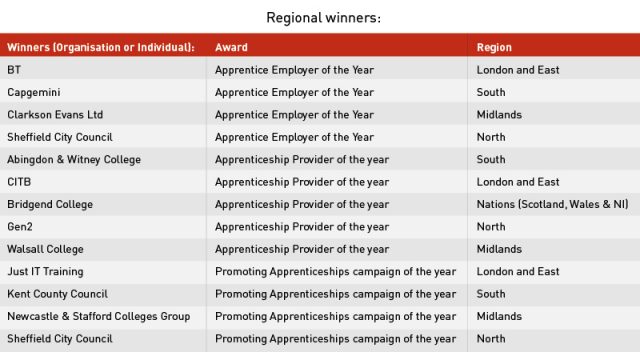 Shane Mann, the managing director of LSect, the group that runs both FE Week and the awards, said: “I would like to say a huge congratulations to our regional winners recognised today, as well as all the national finalists.

“Our panel had a rigorous process for drawing up the shortlist, and identifying the best of the best. It was extremely difficult to do this because we had so many fantastic entrants.

“Today’s event has been a major success and I would like to thank our sponsors and Robert Halfon for making it all possible.

“We now look forward to the national results on March 22 at the Annual Apprenticeship Conference in Birmingham.”

FE Week and AELP announced the full shortlists for the AAC Apprenticeship Awards in association with CMI in February, and the national winners will be unveiled on March 22 at the Annual Apprenticeship Conference in Birmingham.

The conference will run from March 21 to March 23 at the International Convention Centre in Birmingham.

The judges for this year’s awards included Alison Birkinshaw, the president of the Association of Colleges, Rob Colbourne, the managing director for Performance Through People & Chair, West Midlands Provider Regional Network, and Sue Taylor, network manager at ALPS Partnership.

Also on the panel were Sharron Robbie, managing director of Devon & Cornwall Training Provider Network and chair of the South-West Training Provider Network, Mike Cherry, the national chairman of the Federation of Small Businesses, Mark Dawe, the chief executive of the AELP, Bill Twigg, the senior apprenticeships manager at City & Guilds, and Stewart Segal, an AELP board member.

FE Week and LSect would like to dedicate a special thanks for the generosity of the sponsors which are supporting the awards in their first year.

Particular thanks go to our headline partner for 2018, CMI. “Without their support we wouldn’t be able to administer these awards,” said Mr Mann. The full list of national finalists are as follows: 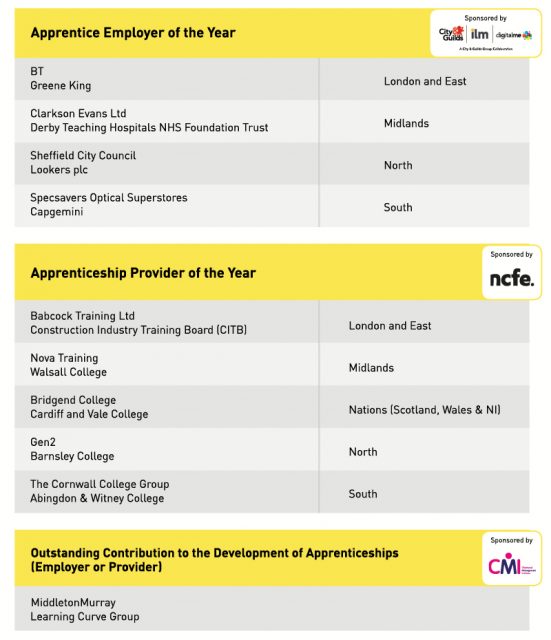 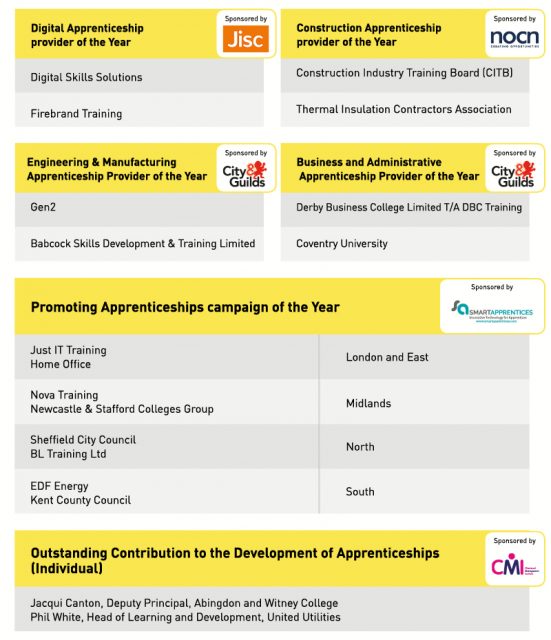 Here’s video reaction from some of the delighted winners: