Talk about the “magic” of teaching, and less about structures and funding routes, to attract more people into the FE workforce, a leader in staff training has told the government.

Education and Training Foundation chief executive David Russell made the remarks yesterday at an FE Week webcast on the Skills for Jobs white paper, specifically its fifth chapter on “supporting outstanding teaching”. 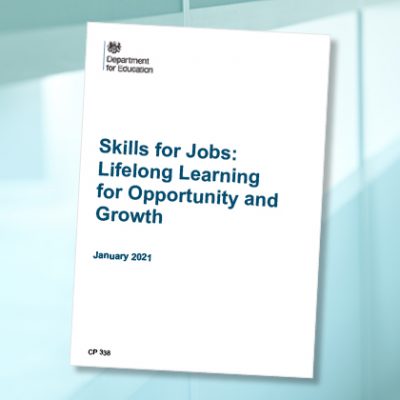 Work would also go into enabling a “strong” relationship between employers and providers so industry experts can move into teaching, while lecturers can maintain “up-to-date” knowledge of their sector.

Government should ‘talk a lot more about teaching’

But Russell said improving the status and prestige of FE teaching is a “big” objective for improving recruitment into the sector, as it would “make it an attractive profession to move into for people who are coming at it for the first time”.

The “biggest thing” he thinks government could do to improve the status and the prestige of teaching is “to talk a lot more about teaching”.

“To talk a lot more about the process and the magic of teaching young people and adults to do new things, to discover new things, to empower themselves.”

Another part of improving status and prestige, according to Russell, is getting people involved early, such as at an undergraduate level.

The Education and Training Foundation has run a Talent to Teach in FE programme, giving students placements working with learners in local colleges or training providers, something Russell compared to “opening up this secret garden of further education”.

He talked up the success of several other government recruitment and retention programmes, which the Education and Training Foundation had delivered for the FE sector.

One of which, the Taking Teaching Further programme to attract industry professionals to the sector, had been “really successful”.

Russell said the programme “helps colleges recruit hard to fill vacancies,” but also funds timetable remission, mentoring, and links to professional networks, which he believes are “key” for recruitment and retention.

Another DfE-ETF programme, on Apprenticeship Workforce Development, is a “much-welcomed start” on improving the quality of teaching in that sector.

But it is “not just about CPD” – it is also about career pathways, as “rebuilding” the pathways, which are not “clear” currently, and having recognised professional status, is “really, really important”.

“At the heart of this” should be a “strong, diverse” professional membership body, he said.

Lack of action on teachers’ pay a ‘massive gap’

Another thing the white paper missed out on was pay, which Russell called “a really big problem”.

Teachers’ pay, which is set by individual colleges, has become a hot issue in the FE sector.

Trade unions were outraged late last year when the Association of Colleges, which gives recommendations on staff pay to principals, proposed a pay rise 1 per cent or £250, whichever was greater.

This, it said, was because of the unforeseen and “severe financial pressure” colleges were facing which have “forced many into deficit”.

But after the government injected £400 million into colleges this academic year, education unions said it was time for “an investment in staff” who would “provide the skills for a post-Covid recovery”.

Anne Murdoch, senior college leadership advisor for the Association of School and College Leaders, told FE Week in February government’s ambitions of bolstering the FE workforce “would be nothing more than a pipedream” without funding to raise pay.

Speaking today, Russell said the white paper “dealt with recruitment, with training, with development, but it does not deal with recognition or reward”.

“That’s what it’s like teaching in the FE sector right now. You’re perched on the edge, you’re really tense, and you might fall over.”

He described the paper’s lack of action on pay as a “massive gap” which the government and the Department for Education are aware of and have to return to, “otherwise the three legs won’t create a stable system”.

But Russell, a former national policy director for vocational education at the DfE, was not convinced the Treasury would step in with a blanket pay rise for the sector.

“They consider them to be dead weights,” he said, a Treasury term for “when you pay more for something, but you don’t get anything back in return”.

Watch the full webcast, run in partnership with NOCN, below: