The degree apprenticeship programme needs greater clarity in quality and delivery standards, and diversification away from management degrees in order to be truly successful, says David Allison

The education secretary lauded the degree apprenticeship programme when she announced 27 new projects this week, yet new projects are not all that is needed.

The ‘new’ industry-designed degree apprenticeships appeared to offer a paradigm-shift when announced in March 2015 – offering a once in a generation opportunity to close the gap between ‘vocational’ and ‘academic’ routes.

There has been significant support for the development of these embryonic qualifications; a fund of £10 million was announced in March 2016, and in November of that year, the first tranche of £4.5 million was allocated to help develop new degree apprenticeships for students starting in September 2017, with a target was 5,200 new opportunities for apprentices and their employers in the first post-levy academic year.

Eighteen projects were identified and funding distributed to the likes of the University of Cumbria, Sheffield Hallam, London South Bank and Nottingham Trent.

But a review of data from the Institute of Apprenticeships shows progress that is most generously described as ‘patchy’.

Of the total 33 standards now on the DfE website, only 18 are ready for use (see chart). This is little more than the 13 that were announced in March 2016. 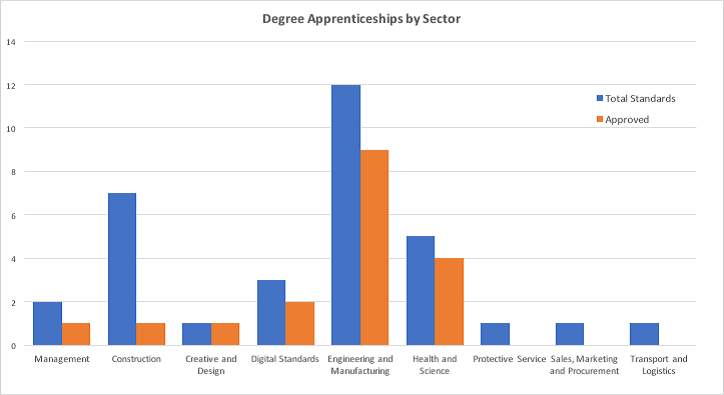 Without the standard, assessment plan and approval from DfE, these standards are literally nothing more than a collection of paperwork. With £10m invested exclusively in the development of degree apprenticeship standards for a Sept 2017 intake, it would have been hoped that these would have made it through to use.

And of the 18 standards that are ready for use, only six are recorded on the DfE website as having any providers registered to deliver them (see chart). 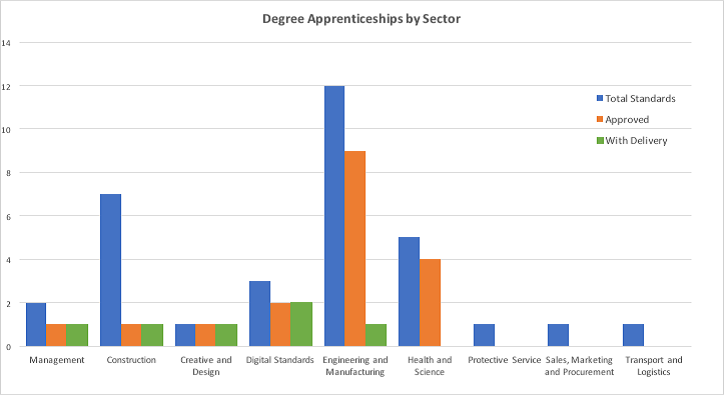 Of course, in this new market, there is a significant difference between institutions with a truly national reach, such as the Open University, and other HEIs that have historically served a more local or regional audience. A close inspection of who is registered also exposes that these ‘degree apprenticeships’ appear not to be delivered exclusively by the UK’s well established HE sector.

First of all, let’s consider the number of providers that have registered to deliver which standards. This data is telling; the education market in the UK has honed the skills of education establishments in predicting the combined impact of student demand and government funding. 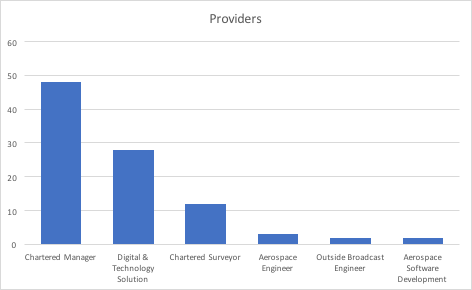 There is a very obvious bias towards chartered manager for delivery (see chart above); this accurately reflects the education sector’s view that the majority of levy paying employers are likely to use their funding to upskill existing managers. The potential providers for this standard are mixed. There are a range of prestigious private and university organisations. There are also others where it is not immediately obvious that their status is consistent with the delivery of a Degree Apprenticeship. It may be difficult to explain to young people of the equivalency of a Degree Apprenticeship from a provider or employer without degree awarding powers, and there are a number of these on the list, one is even registered to a flat in London.

The word ‘degree’ carries with it a certain level of expectation; a university or other degree awarding institution, robust quality control, peer review of research and examinations. If the institutions delivering degree apprenticeships are not operating in line with public expectation, then rather than raising public perception of apprenticeships, we run the risk of devaluing one of the most secure elements of the UK’s education system.

When we consider this information, it is perhaps not surprising that degree apprenticeships have yet to transform the perception of vocational education.

In addition to the challenges set out above, the transfer to degree apprenticeships does not appear to maintained the clarity of the university and graduate system. A wide selection of level 5, 6 and 7 qualifications with a range of diplomas or professional memberships are being included in publicity for degree apprenticeships. This is further confused by the inclusion of ‘post graduate apprenticeships’, which are not degrees either.

The launch of degree apprenticeships still offers the opportunity to address the significant productivity gap that the UK faces. But we urgently need:

(1) A naming convention that includes the name (degree) and the award (BSc) in the title of all degree apprenticeships.

(3) A rapid adoption of degree standards by the university sector as a way of accelerating high quality delivery with national scale.

(4) The promotion of degree apprenticeships to create opportunities for young people, not simply as a tool for educating existing middle management.

David is the co-founder and CEO of GetMyFirstJob.co.uk and theTalentPortal.co.uk