A huge 5 per cent staff pay rise costing over £2 million per year was a big win for the University and College Union in November, and for the time being, this settlement put an end to troublesome disputes at Capital City Colleges Group.

But a closer look by FE Week has found unplanned multi-million-pound budget deficits persist, resulting in a precarious financial position that has led to nearly 50 job cuts so far. The board has been warned that failure to address this will have “serious consequences”.

What’s the plan to turn things around at this London mega-college? FE Week chief reporter Billy Camden sat down with new chief executive Roy O’Shaughnessy to find out.

There is hardly a part of London that isn’t a short tube ride away from a Capital City College Group site. Its 13 centres employ nearly 1,500 staff and teach over 30,000 students who live across 26 boroughs.

But the complexities and costs of merging three individual colleges – City and Islington, Westminster Kingsway, and The College of Haringey, Enfield and North East London – have hit it hard.

The group is expecting, for the third year in a row, to record a significant deficit, despite early predictions from the leadership and board that they would achieve a healthy surplus.

New chief executive Roy O’Shaughnessy, who joined at the start of the academic year from national charity The Shaw Trust, has a number of radical solutions to overcome the situation – including a venture in Cuba. But firstly, he tells me how the group has ended up in a financial muddle.

“There were several things that we have to be upfront about,” he says. “There was a complete failure of our IT systems regarding marketing and enrolment, as an example” – an issue that has led to the group spending £2 million on computer equipment, infrastructure and network upgrades.

He adds that there also wasn’t a “sophisticated ‘sense testing’ of budgets” during the years following CCCG’s merger.

“The mistake that was made, in my mind, was not saying ‘it’s actually going to cost an extra £5 million to do this, let’s be clear and upfront, let’s be very cautious on our budgets and where the savings are, and let’s make absolutely certain we always come out a little bit ahead each time’,” O’Shaughnessy admits.

The group has also under-delivered across a number of other income lines, particularly in apprenticeships, where its target income for 2017-18 was £8.4 million but it ended up making just £5.9 million.

“Sense testing” is now pivotal for O’Shaughnessy to ensure budget predictions are realistic and accurate from the get-go. If, in a particular area, “we think £16 million is safe in income”, for example, “we are discounting it by 5 per cent no matter how safe it is”, he tells me.

CCCG has a combined income of almost £112 million. It also has net assets of just over £300 million – the vast majority of which are its buildings – and long-term debt of £600,000.

A large operating deficit, currently estimated at £3.684 million, is expected for 2018-19, even though early predictions by the board showed a £750,000 surplus.

Of the deficit, O’Shaughnessy says £2.8 million is due to the generous 5 per cent pay award agreed with the University and College Union in November.

But it also doesn’t take into account the savings that will be made following a period of voluntary redundancy, which O’Shaughnessy says was agreed with the UCU at the time of the pay deal.

He tells me that 48 jobs were cut at the end of June, and has not ruled out more in the future.

The group is also struggling to use up its adult education budget, and faces a potential clawback of £1 million this year following a £690,000 clawback in 2017-18.

Despite CCCG’s repeated deficit position, the Education and Skills Funding Agency has continued to grade its finances as “outstanding”, according to minutes from a board meeting in April.

The same minutes state that failure to address the budget deficit going forward “would have serious consequences for the group’s financial viability, with a significant impact on learners, employers and staff”.

Considering this, does O’Shaughnessy regret the staff award?

“I’m absolutely convinced that if we didn’t do that we would be facing a whole raft of different challenges right now,” he says, adding that it was a “tactical move”.

“When you look at what we have got to do to maintain a good rating, the actual pay award pales into insignificance if we can get the productivity and the will to really work on this in a way that would be the FE of the future.”

O’Shaughnessy took the reins at the group in September following the retirement of Andy Wilson.

His remit is clear: instead of “salami slicing” CCCG’s budget year after year, “I’m here to come up with a long-term sustainable model” as “we’re not counting on government to bail us out”.

There is “no doubt” in his mind that the group needs, in certain parts, to operate “much more like a private provider” and generate non-government income.

In this space, CCCG has recently set up a “little organisation” called Visionnaires, where Pablo Lloyd, who was the first chief executive of Activate Enterprise – the apprenticeships arm of the Activate Learning Group – is the founder.

The idea behind the venture is that any FE student who has a “credible business idea and passes our selection process will receive the help required to plan, implement and found their business”.

“On certain projects 51 per cent of the ownership will be gifted to the college for a specified number of years but will reduce to 0 per cent by a specified date.”

O’Shaughnessy is also thinking of expanding the college group’s work overseas – with Cuba being one potential venture.

Earlier this year Cuba’s minister for higher education visited the UK and during his trip, he toured CCCG’s renowned Victoria Centre, which is known as one of Europe’s leading centres for teaching hospitality and the culinary arts and boasts celebrity alumni such as Jamie Oliver.

O’Shaughnessy followed this up with a visit to Cuba himself, at the request of the country’s government, during the May half term where he spent four days on the island to discuss a partnership.

He has now been asked by the Cuban government to write a proposal for how CCCG may support their plans for improving the quality of training for hospitality and tourism workers, as well as specialist training for chefs.

One possible outcome of this could be, for example, a teaching hotel and restaurant on the island that would employ Cubans, trained by CCCG to run and manage the initiative.

The college group asserts that any final plans would be would generate an income.

Colleges have been warned off overseas projects at various times following many failures. In January, for example, FE Week revealed that Highbury College called in lawyers to recover a long-running £1.4 million debt held up in Nigeria, after a technical education project in the country went wrong.

O’Shaughnessy says he is aware that international development is “fraught with dangers” but believes it is a “fruitful area” and stresses that any overseas work that CCCG embarks on will be done “very cautiously, only working where the contracts are guaranteed”.

On the other side of this, he says CCCG has “one of the best estate portfolios”, which he wants to use as “income generators, rather than selling off as a one-time assets”.

A new estates strategy is being developed, he says, and he picks out the group’s site on Regent’s Park as an example.

“It is the only undeveloped piece of property between King’s Cross and Westminster,” he explains. “It is a five-storey building. We know we can put 16 storeys there – we could put 22.”

The college site would retain the space for educational purposes, but the rest of the development would be “used for profit activity, from luxury flats to London living wage flats” as well as “branded restaurants”, which would create “an £80 million endowment if we maintain control over it”. 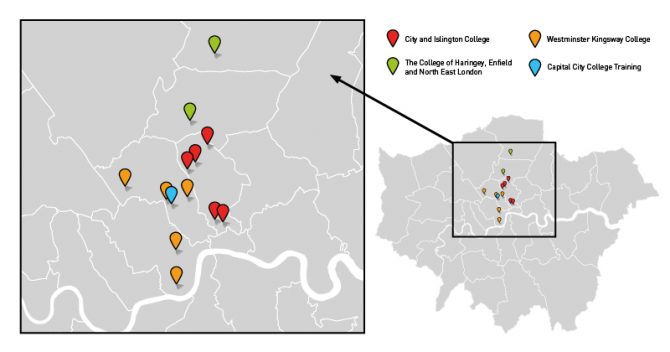 “Our vision is that anything we do as part of this, our students will be able to work there, they will be trained there, their apprenticeship programme could be linked with that,” he adds.

“We have properties in the middle of London that we should be maximising and that is part of the solution – it’s not just cost-cutting and trying to reduce in the classroom.”

The plans are certainly ambitious, but “if we can’t do this, then I don’t know who can”, O’Shaughnessy believes.

He says there are “no fixed plans for property sales at the moment”, but the group is looking to consolidate its 13 sites in consultation with staff and students as there is “no doubt that in our centres there is replication of services.

“I don’t have a plan to take 13 sites to 10 or something, but logically, when you look around the world of business, if you put together a group you must answer the question: are we doing this as efficiently as possible for the beneficiaries.”

Final plans are expected to be in place by January.

O’Shaughnessy is keen to stress that he doesn’t “want it to seem like we’ve got it all figured out, because we don’t”.

But, “what I can say is we are not taking the easy way out on this.

“We’re being realistic, underestimating income, overestimating expense until we get this model right, and we’re thinking ahead to what could go wrong, and at the same time saying we have got to develop our own funding streams going forward.

“Not only have we got the scale, we’ve got very good reputation, and if you take the buildings strategy, the Visionnaires, the private enterprise growth strategy, the future is bright.”