The autumn budget will be delivered by the chancellor on November 22, and leading sector bodies have made requests to benefit colleges, and independent and adult learning providers. FE Week looks at key recommendations.

In its pre-budget submission, the Association for Employment and Learning Providers has called for “an open debate” on funding non-levy apprenticeships after April 2019.

Teething issues with the new levy system have been compounded by the saga surrounding funding for apprenticeships in non-levy-paying firms. A second procurement process descended into farce last month, after the first, which was massively over-subscribed, was scrapped.

Only employers with an annual payroll of at least £3 million currently pay the levy, while smaller firms also have to contribute to training costs for the first time, through a 10-per-cent co-investment model. This should involve the government paying 90 per cent of costs from leftover levy revenue. 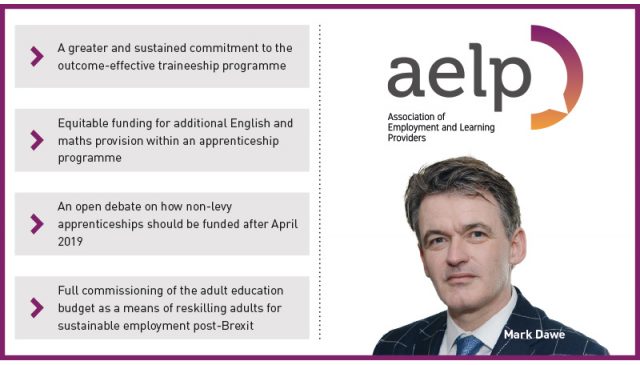 The Association of Colleges also fears the system isn’t working and called in its submission for “a review of the rules”, which it said grant levy-paying employers control of 110 per cent of funds generated through their levy payments.

This figure is a reference to levy-payers, which get a 10 per top-up of the funds in their digital account, so in theory they can spend 10 per cent more than they pay.

This situation “gives larger employers the first call on training funds” and “squeezes” smaller non-levy paying employers into “second place”, the AoC warned. It called for the proportion they control to be reduced to 75 per cent “to release funds to address failures in the training market”.

Last week, it was revealed that total apprenticeship starts since the levy launched were down 61 per cent, compared to the same period last year. 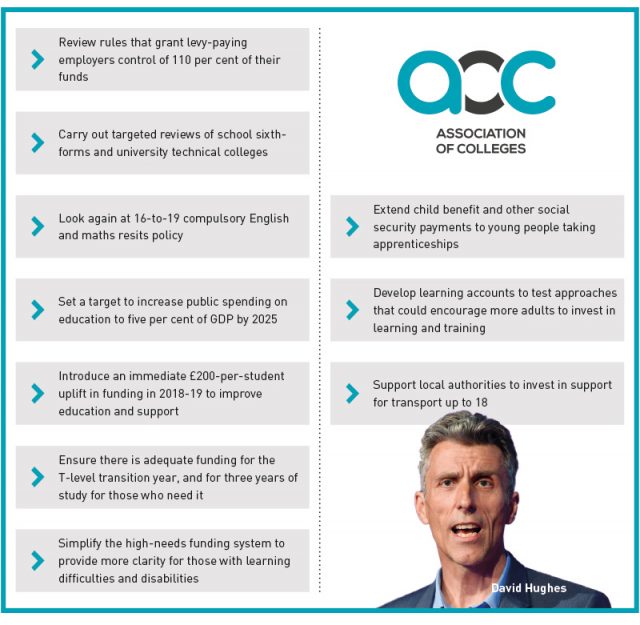 “It would be sensible for regional schools commissioners and councils to be asked to review sixth forms which are particularly small and/or underperforming,” read the AoC’s submission.

“There has been no rationalisation of school sixth-forms for more than 20 years as a product of ideology and DfE neglect,” it added.

It also wants a review of the struggling university technical college programme.

The AoC and Havering Sixth Form College challenged the DfE last year over its decision to fund a new sixth form at Abbs Cross Academy and Arts College in Hornchurch, Essex.

One standout demand, this time from the adult learning provider membership body Holex, is for the creation of a special adult basic skills fund for low-skill sectors, to ease anticipated home-grown recruitment problems post-Brexit. 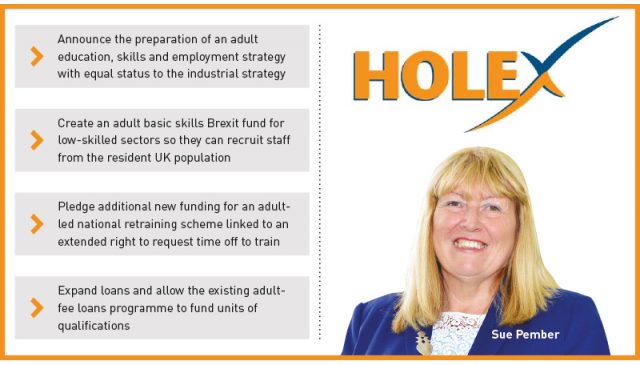 It thinks this should work alongside a new cross-department post-16 education, skills and employment strategy.

Delivering “better value in a post-Brexit economy” also motivated the AELP to ask the government “to consider whether all ESFA non-schools funding and programmes should be subject to open tender”.

On loans it called on the government to “allow the existing adult-fee loans programme to fund units of qualifications”, and “promote adult level 3 and 4 students by providing maintenance loans”.

People also want the DfE to review compulsory 16-to-19 English and maths resits policy, which the AoC supports in principle but warned are “not working”.

The AELP wants “equitable funding” for additional English and maths provision for apprenticeships.

It previously drew attention to “the large differential in post-16 funding between English and maths taken as part of an apprenticeship (£471) and that available for the same subjects in the form of classroom provision (£724)”. 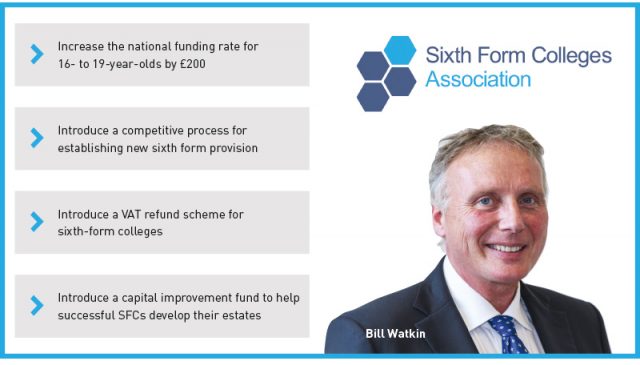 “Our research shows that many providers deliver the learning at a loss within an apprenticeship and AELP believes that all English and maths delivery for apprentices should be funded as a minimum at the equivalent stand-alone rate,” it explained.

It also wants a £200 increase to the national funding rate for 16- to 19-year-old learners.