Team UK has retained its top-10 position at WorldSkills this year, after our competitors bagged one gold, three silvers, three bronzes, and 13 medallions of excellence in Abu Dhabi.

Our competitors will be going home with their heads held high after pulling in a medal haul that betters rivals Germany and over 45 other nations, at a competition commonly known as “the Olympics of skills”. 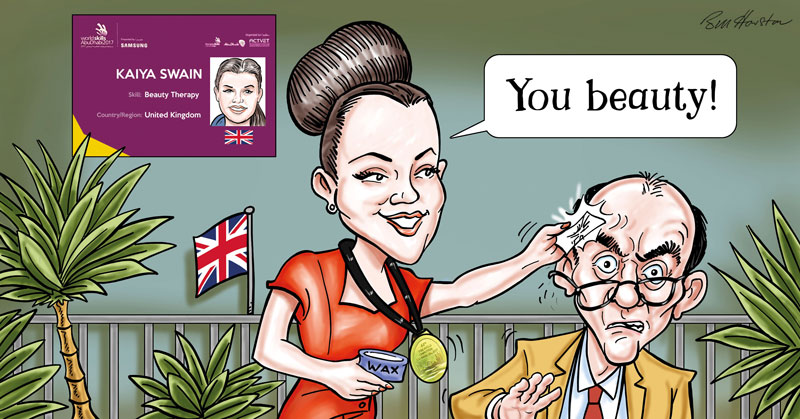 The 22-year-old, who trains at Sussex Downs College and runs her own business called Kaiya Rose Beauty, said it was an “absolute honour to represent my country”.

“This is a dream come true, I never expected to come out on top,” she added.

Kaiya celebrated her gold medal at a spectacular closing ceremony in front of 15,000 spectators tonight at the du Arena, which was broadcast for the world to see.

Kaiya Swain you beauty! She’s just been named the world’s best young beauty therapist. Here’s what it means to her #TeamUK #WS_AbuDhabi pic.twitter.com/cpXl9j4mbD

Catherine Abbott didn’t expect a medal, but she’s bagged a silver in visual merchandising for #TeamUK! Here she is just moments after stepping off the podium #WS_AbuDhabi pic.twitter.com/6Q7A4OUQ3U

And picking up our three bronze medals were plumber Dan Martins, 20, from EAS Mechanical, cabinet-maker Angus Bruce-Gardner, 22, who trains at Waters & Acland, and auto-repairer Andrew Gault, a 20-year-old from Riverpark Training and Development.

A very emotional Angus Bruce-Gardner tells us how it feels to win bronze in cabinet making at #WS_AbuDhabi #TeamUK pic.twitter.com/xU4TRnu4Ya

Dan Martins is absolutely made up with winning bronze in plumbing and heating at #WS_AbuDhabi for #TeamUK pic.twitter.com/F1OYIV1a9R

Andrew Gault picks up bronze in auto body repair – here’s what it means to him #TeamUK #WS_AbuDhabi pic.twitter.com/aIxqBmTH02

Team UK finished 10th in the medals table and was the smallest team to make the global top 10. Germany finished joint 12th with Finland.

Thirteen other members of Team UK were awarded a medallion of excellence for reaching the international standard in their skill.

This year’s competition was seen by many as a litmus test for the UK’s ability to cope when Brexit kicks in from 2019.

“If we celebrate Team UK’s success and use it to inspire others to follow in their footsteps – the future of the UK is in safe hands,” he added.

Apprenticeships and skills minister Anne Milton, who visited the competition to support the team this week, called upon parents to take note of the results.

“I have been blown away by Team UK,” she said. “They have done fantastically well – this is the UK competing on the world stage for skills and achieving great things.

“There will be huge celebrations when they come home. To get to this level is brilliant.

“There is a message here for parents: university is not the only option. The opportunities are boundless if they overcome any bias that they might have. We must ensure that the young apprentices here become an inspiration to others.

“WorldSkills UK is doing a fantastic job supporting these young people, with thousands of hours of input. We need to put all that they are doing – the ethos of this competition, the spirit of these apprentices – into a bottle and sprinkle it across the UK.”

They were among more than 1,200 other young people from over 50 nations, who are specialists in 51 different disciplines from hairdressing to aircraft maintenance, and plumbing to 3D games design.