There were just 27,000 apprenticeship starts last November according to figures published by the government this morning, 40 percent fewer than in 2016.

As the figures above show, this latest update to the monthly starts will come as a huge disappointment following declines of 21 and 24 percent in September and October.

The figures from August 2017 onwards remain provisional, and Department for Education (DfE) has warned that they are subject to change.

The government did not publish monthly updates or starts per month in previous years, so it is not possible to compare provisional figures.

Provisional figures published by the DfE in January revealed that provisional starts for the first quarter of 2017, covering August, September and October, were down 26 per cent compared to the same quarter the previous year.

The government’s target is to hit three million apprenticeship starts by 2020. November 2017 represents just past the five year half-way point with 1,226,900 starts since May 2015.

As the graph below shows, this is currently 18 percent below the target trajectory, representing a very sizable and widening gap to make up of 283,100 starts simply to be back on track. 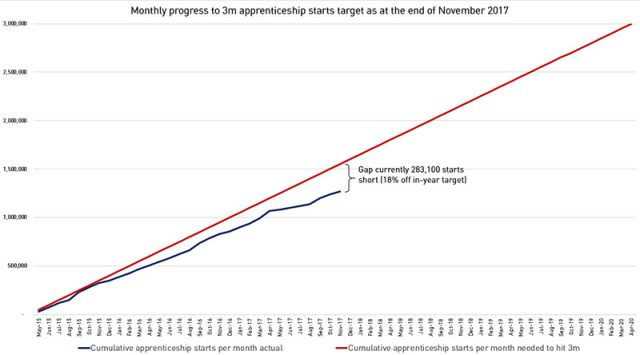 The country would have to add an average of at least 50,000 apprenticeship starts per month to have a chance of achieving that ambition, a threshold which has only been passed three times since May 2015, prompting calls from the Association of Colleges for the target to be scrapped.

However, a spokesperson for the DfE said the government is still “committed” to hitting the target.

During an exclusive FE Week interview on Tuesday, skills minister Anne Milton revealed she expected to see a surge in apprenticeship starts by September.

Responding to the latest figures today, Ms Milton said employers had seen “a period of significant change” over the last year and the DfE would continue to “work with them to adjust and respond.”

She added that, as employers have two years to spend their levy funds, it is “right” they plan “high quality apprenticeship training that meets their specific needs and maximises the benefits apprenticeships can bring.”

Mark Dawe, chief executive of the Association of Employment and Learning Providers (AELP) told FE Week: “Here is hard evidence rather than anecdote and we don’t want to hear any more excuses.  These latest figures seem to confirm that the government is currently way short of hitting its manifesto target.

“But the real concern is the impact on social mobility as we see fewer starts for young people and at levels two and three.  How many more months’ data do we need before the government starts taking action?  AELP is calling for no more employer contributions towards apprenticeships for 16 to 24 year olds at non-levy paying employers, or at employers that have exceeded their levy.”

For more analysis and reaction see the next edition of FE Week.