Since October 2018, the watchdog has been carrying out monitoring visits at every directly-funded provider which won its own contract to deliver training after April 2017.

Any that are found to be making ‘insufficient progress’ in at least one area will be suspended from recruiting unless there are “extenuating circumstances”.

The Education and Skills Funding Agency has released an updated version of the register of apprenticeship training providers for July, which shows 41 providers are currently banned from taking on apprentices.

Arriva London North was criticised because its leaders “lack the expertise to provide successful apprenticeship provision”, according to Ofsted, and its managers have not provided any teaching or learning in maths and English for a large majority of apprentices, of whom there are 68 in total, who need functional skills qualifications, since September 2017.

Leaders and managers at Ashley Community & Housing were criticised for implementing improvements that have been identified in formal quality reviews too slowly.

Their board members were aware of the improvements the provider, which has 14 apprentices, needed to make, but did not challenge leaders and managers about the pace of implementation.

Apprenticeship programmes at EQV, which are being delivered to 106 learners, are “poorly planned”, inspectors wrote in their report. Leaders have focused more on getting apprentices management qualifications than their apprenticeship.

Too many learners at Gloucestershire Enterprise Limited, which has 176 apprentices, are not expected to complete their qualification in the planned time frame, because systems to monitor their progress have been implemented too slowly, according to Ofsted.

Most of the approximately 550 apprentices at Manatec are not aware they have an entitlement to off-the-job training, and almost all of them complete their training in their own time.

The watchdog found at Poole Hospital NHS Foundation Trust, which has 70 apprentices, that too many learners have passed their planned end date; and a few were not clear what apprenticeship they were on, or when they were meant to finish, as previously reported by FE Week.

Ofsted found that trainers at Prospects Training International do not collect detailed, and in many cases, accurate, information about the existing knowledge, skills and experience of the provider’s 1,017 apprentices at the start of their programme.

A minority of business administration apprentices at The Teaching and Learning Group, which has 19 apprentices overall, have submitted very little, or no work, inspectors found.

A provider to 58 apprentices, Took Us A Long Time, a subsidiary of restaurant operator Tasty Plc, recruited apprentices from the company’s staff who already have experience of serving or preparing food within a commercial environment and to commercial standards.

This meant too many learners were placed on programmes from which they did not develop substantial new skills and knowledge, Ofsted said.

Lastly, WDR has not made sure potential apprentices and their line managers fully understand the requirements and components of an apprenticeship.

One group of team-leading apprentices were given no choice by their employer about participating in the programme; which meant high numbers of WDR’s 91 apprentices have left the programme early.

Ofsted has started conducting full inspections of new apprenticeship providers that were previously banned from taking on new starts following ‘insufficient’ monitoring reports, and awarded them grades that allow them to start recruiting again.

Mitre Group has been released from its ban after receiving a grade two report from Ofsted.

GTG Training, after been rated as ‘requires improvement’, has also been permitted to recruit new starts.

Develop-U was given a grade three rating by Ofsted in April, but is still on the ESFA’s list of suspended providers. 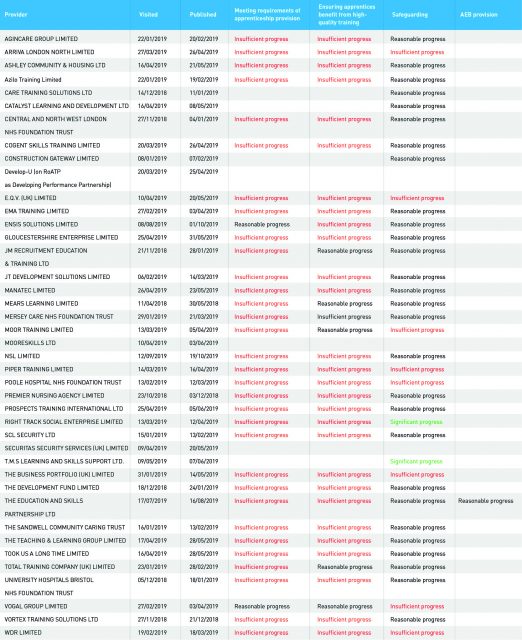