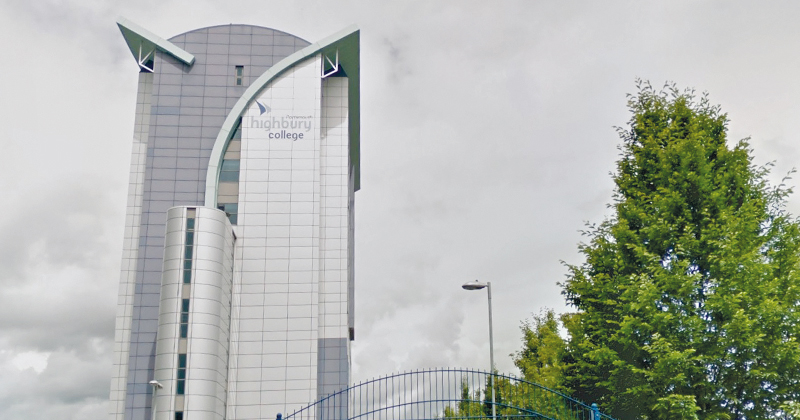 A college rocked by an expenses scandal has been saved by a £1.5 million government bailout after its new leaders found it had almost run out of cash just weeks after the former principal left.

The emergency funding was granted to Highbury College this month after its bank refused to supply an additional loan.

It followed a “reprofiling” of the college’s Education and Skills Funding Agency allocations, which meant £800,000 was received quicker than planned, at the beginning of the year when its interim leaders first became aware it could soon go bust.

The bailout should enable the college to “continue to operate for at least a further year”.

The details were revealed in the college’s delayed 2018/19 accounts which were published yesterday following a “thorough independent audit of historical finance practices”.

While Highbury achieved a surplus of £1.6 million last year, this was largely because of a £5.7 million building sale that was completed in August 2018.

The college is predicting a deficit of £1.3 million by the end of 2019/20 and to remain in ‘inadequate’ financial health, but this could worsen as the Covid-19 pandemic has exacerbated their problems and has lost “significant income” from its commercial activities.

The 2018/19 accounts state that the total net impact of the pandemic to date on the college’s cash flow is “estimated to be £124,000 negative”, although the full effects of the virus are still unknown.

Highbury College has gone through a turbulent period in recent years. It axed its sixth form last year owing to financial pressures and made a number of staff redundant, and is still in the midst of a long-running legal battle in Nigeria to recover funds.

The government intervened at the college in September 2019 after an FE Week investigation revealed how its long-standing principal, Stella Mbubaegbu, had spent £150,000 on expenses in four years, which included one-off lavish items such as a £434 pair of designer headphones and a lobster dinner.

The college has been in FE Commissioner intervention since November. A report on commissioner Richard Atkins’ findings has been held up by the Covid-19 pandemic.

Mbubaegbu, who joined in 2001 and officially retired in April 2020, actually left her position as accounting officer in December – a month before new interim principal Penny Wycherley and interim chair Martin Doel discovered Highbury was running out of cash.

The newly published accounts reveal “significant accounting failings over a number of years”, which were discovered by new external auditor’s from Mazars who were appointed in July 2019.

The auditors found, for example, that “no books or records were maintained” for the college’s subsidiary Highbury College Nigeria Limited.

They also gave their opinion on Mbubaegbu’s expenses (click here for full story).

The accounts were signed off on a going concern basis but with “material uncertainty” going forward.

Doel said the college has “already made significant steps to secure the college’s finances”.

“Between the period of time these accounts review and now, the college has become, in many ways, unrecognisable,” he added.

“The introduction of an experienced interim governance and leadership team has not only stabilised the finances and significantly improved staff morale but the college’s success and retention rates look to remain well above national average, meaning our students are able to thrive in a supportive and productive environment.

“On top of the day-to-day challenges of the FE sector, our staff and students have also adapted fantastically to the current Covid-19 pandemic and shown true strength of spirit to think innovatively, overcome hurdles and continue to succeed.”

The college hopes to move its financial health to ‘requires improvement’ by 31 July 2021.

A Highbury College spokesperson said the £1.5 million bailout is repayable and the details of the repayment are currently being finalised.

A spokesperson for the DfE said: “We can confirm that Highbury Portsmouth College requested Emergency Funding in May 2020 due to cash flow issues.

“In line with the arrangements set out in the College Oversight: Support and Intervention all such requests are considered on a case by case basis. Funding has been approved and arrangements for paying these funds are currently being finalised.”

They added that the FE Commissioner’s report publication has been suspended during Covid-19 and that Highbury’s will be released in “due course”.