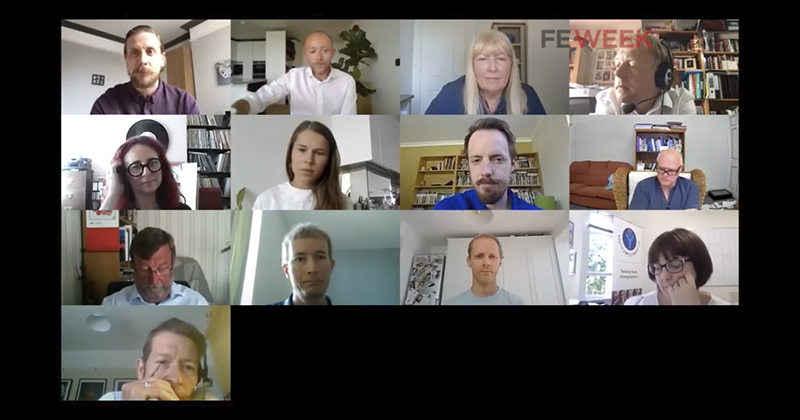 The Covid-19 pandemic has caused a great deal of disruption across education, including cancelled exams and campus closures to most learners, the impact of which is expected to be felt into the next academic year and likely beyond.

Education leaders and policy experts discussed the anticipated ongoing impact on 16-to-24- year-olds, adult learners and apprenticeships at an FE Week roundtable debate on Tuesday, in partnership with NCFE.

It followed the joint publication of a discussion paper by NCFE and Campaign for Learning, education policy consultant Mark Corney, and director of policy at Holex adult education network Susan Pember, which warns of a “very different September” to the one Whitehall had planned for.

One key area of concern is safe travel and social distancing on transport for younger learners as they move to and from their college or training provider.

Principal of New College Durham, John Widdowson, told the roundtable this is a particular problem for rural areas and he is considering a shortened college day, for example, between 10am and 3.30pm, to lessen pressure on public transport at peak times.

“We know that only half capacity will be allowed on each bus that comes in because of social distancing, we know that they are going to prioritise people coming to work, so we’re thinking about maybe a differently timed college day,” he explained.

Widdowson added that his college is also “thinking about potentially having – instead of trying to plan a curriculum on a linear basis, September through to June-July – to modularise it, so we’ll do complete units of learning, which is something we’ve not really done before, but that then gives them something in the bank”.

David Robinson from the Education Policy Unit touched on the topic of calculated grades being awarded to students this summer following the cancellation of exams. He warned that, as teacher assessment “tends to be biased” against disadvantaged learners, it could prove an additional challenge to post-16 institutions to match them to a programme of study, so there “may be more adjustments needed in those early stages”.

Corney cautioned against this potential “overpromise” and instead recommended the expansion of funding for 19-to-24 full-time places at FE colleges, maintenance support to complete level 3 qualifications and a T-level “guarantee”.

Robinson challenged the latter, arguing the rollout of the new technical qualifications is already “relatively slow”, with capacity concerns within the sector, and that this could put it at further risk.

The Association of Employment and Learning Providers’ chief policy officer Simon Ashworth suggested traineeships as an alternative established programme to help young people develop their skills to enter the jobs market, which he said could be a “useful vehicle” if flexibilities are introduced in the long term.

However, Brenda McLeish, chief executive of Learning Curve Group, said there are “big concerns” over the provision of work placements due to Covid-19 and staff redundancies, as well as the ability to recruit new apprentices during this period.

She added: “What we need is definitely a skills training programme, and a funding guarantee for these people.”

Turning to the needs of adults, Stephen Evans, chief executive of the Learning and Work Institute, claimed: “We really need a much bigger scale of ambition and action and urgent action to get proper help and support to [furloughed workers] as well.”

McLeish talked about the success of her provider’s #EducateWhileYouIsolate campaign, which had received 28,000 expressions of interest in online courses within its first six weeks, but lamented that there was “no funding pot there to sustain it… [or] any increase in the adult education budget”.

She added that there will be a “fear factor” for adults returning to work or participating in groups, so believes it will be necessary to offer a “blended model” for the foreseeable future.

The final discussion point of the roundtable was the impact on apprenticeships. Corney proposed a single education and apprenticeship participation budget for 16-to-18-year-olds to switch between different types of provision.

Ashworth called the idea a “no-brainer” but said it should be funded by government rather than the levy.

Robinson questioned whether there was a need to “triage” sector demands to those which would make the most impact due to the number of industries asking for support, concluding it“needs to be simple and broad, rather than lots of small sector asks”.

In contrast to the view of Nick Hillman, director of the Higher Education Policy Institute, that apprenticeships were not “near the top of [universities’] concerns at this time”, Ashworth said some higher education institutions see them as an “opportunity to supplement or refill some of the income they might lose from other traditional streams”.

Pember, who “didn’t want to be doom and gloom”, concluded the roundtable was underestimating size of unemployment in autumn, and doubts that employers will offer apprenticeships to level 2 and 3 learners rather than existing employees at higher levels in the next 18 months.