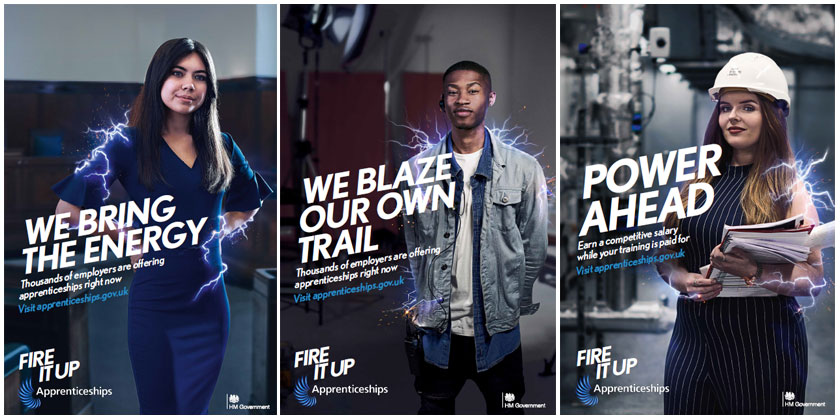 The government’s latest apprenticeship campaign appears to be bearing fruit after the Department for Education claimed the proportion of interested young people has nearly doubled.

Last November, the DfE awarded a two-year £5 million contract to one of the world’s most renowned advertising companies – M&C Saatchi – to help boost apprenticeship numbers across the country.

They launched phase one of the Fire It Up campaign in January, when just 14 per cent of young people said they were considering an apprenticeship, according to the DfE.

Nine months on and this interest has risen by 71 per cent, going up ten percentage points to 24 per cent, the DfE told FE Week.

Figures have been calculated via online surveys of young people who are yet to make an application for A-levels or University and also for those that have already made an application.

Fire It Up, which replaced the DfE’s old “Get in go far” apprenticeships campaign, is moving into its second phase. The first phase involved promoting apprenticeships to young people, parents and employers through a series of adverts on national TV and social media, featuring real-life apprentices.

The second phase will broaden the activity to focus on those audiences that contribute to widening participation in apprenticeships such as those from disadvantaged backgrounds, women in under-represented sectors, low paid workers, people with learning difficulties or disabilities and people from ethnic minority backgrounds.

“Look out for the adverts on TV, cinema, out of home poster sites, digital and social media,” the DfE said.

While the figures show more young people are taking an interest in apprenticeships, it is unclear if the campaign is impacting upon employers.

And this interest has not necessarily helped boost starts, with the latest DfE statistics revealing a 23 per cent drop in the number of them between August 2018 and June 2019 and the same period in 2016/17, the year before the apprenticeship levy was introduced.

The boost in the level of interest may have come too late to save the government’s target of 3 million apprenticeship starts by 2020 also.

In June, the then-education secretary Damian Hinds admitted to the education select committee “that target is not going to be reached”.

Nevertheless, the DfE said its Fire It Up campaign is a “great opportunity for providers and employers to share case studies of your own apprentices with us” and has encouraged them to email their stories to: apprenticeships.campaign@education.gov.uk.