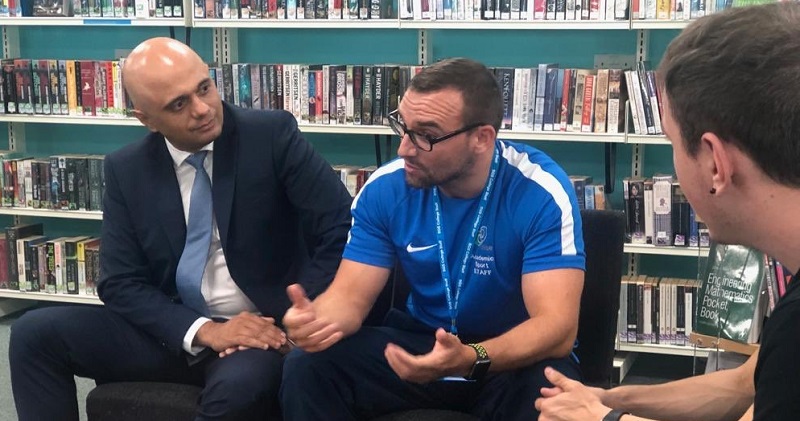 Colleges are to receive a £400m boost from the chancellor, it has been announced.

Sajid Javid today revealed the increase for 16-19-year-old students, which he calls “the biggest increase for a decade”.

This includes £190 million to increase the base rate of funding for 16-19-year-olds; however the government has not revealed what the new base rate will be.

There is also £120 million to help deliver “expensive but crucial” subjects such as engineering; £35 million extra for students resitting GCSE maths and English who are on level 3 courses; an additional £25 million to deliver T-levels; and £10 million for the advanced maths premium, which adds £600 to college budgets for every additional student who takes on A-level and AS- level maths.

There will also be £20 million to help the sector recruit and retain teachers and leaders, and provide more support for the teaching of T Levels.

Javid said: “Further education, like all our public services, is a lifeline of opportunity for our young people.

“We’ll make a strong statement in backing it at this week’s Spending Round and I’ll continue to look at what more we can do to help, just as my FE college opened my horizons and set me on my way.

This funding will come into effect in 2020/21 and cover the 257 colleges in England, as well as other FE providers like school sixth forms.

Learners at South Gloucestershire and Stroud College, which Javid himself attended when it was known as Filton Technical College, met with the Bromsgrove MP yesterday (pictured top).

Javid wrote in The Guardian this morning: “College helped make me who I am today, the first FE chancellor of the exchequer.”

FE colleges are more important than ever, he added, as young people enter working life while technology revolutionises industry, and emerging economies change the global economy.

Education secretary Gavin Williamson, who attended Scarborough Sixth Form College, said: “As former FE students, the chancellor and I both know first-hand how important the further education sector is so I’m really pleased that today that government is giving our sixth forms and colleges a major funding boost – the single biggest annual uplift since 2010.

“This investment will make sure we can continue to develop world-class technical and vocational education to rival countries on the continent so we have a highly skilled and productive workforce for the future.”

FE organisations have long campaigned for the government to increase base rate funding for colleges, with the most famous campaigns being the Sixth Form Colleges Association’s Raise the Rate campaign and the Association of Colleges’ #LoveOurColleges campaign.